“I woke up crying in pain just about every night, but no more since KPR” 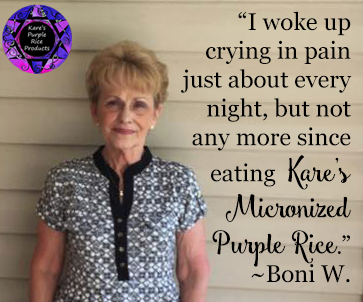 From not being able to leave her house by herself, to joyfully RUNNING up her steep driveway, Boni tells the amazing story of how the Micronized Purple Rice changed her life.

Back in 2007, she was diagnosed with epilepsy after having grand mal seizures.

She was put on medication, she says, which made her gain weight. “It took my small five-foot frame from 102 up to 160 pounds. I worked diligently trying to get my weight back down, to no avail.”

Boni had been walking 5 miles a day for months, trying to get her weight down. “All of sudden I was told I could not go for my walks anymore because the doctors were afraid I would have a seizure.”

She also did without her car for over two years – even had her car keys taken away. “I didn’t like it, but at the same time I didn’t want to drive and hurt somebody. For a while I could not even go out my front door by myself.”

Finally Boni went to another neurologist, who put her on a different medication. “That helped me drop some of the weight,” she says.

“I was able to get my weight down to 139, but I just could not get it down any further. That was very frustrating.”

Boni learned about Micronized Purple Rice in August. She learned how it is milled so fine that it’s powerful nutrients are able to be absorbed through the cell membrane, fuel the mitochondria (the cellular battery), and regenerate the cells.

On August 27, she started on the rice. “Within a month,” she says, “all my aches and pains had stopped.”

“I have not had any more seizures since I started eating the rice, and I haven’t had any trouble with my fibromyalgia, either. I feel younger than I have since I was 40 years old!”

Boni tells about how she used to have trouble negotiating her steep driveway. “My husband used to have to drag me up the driveway – well now I can *run* up it! I just feel absolutely wonderful!”

Her husband was skeptical in the beginning. When she encouraged him to try the Purple Rice, he told her, “When I see results in you, I’ll make a decision.” Seeing Boni’s results after three weeks, he asked her to order some for him too.

Things have improved for Boni in other ways as well.

“I have so much energy now, and my skin has taken on a glow that it’s not had since…well, I don’t know if it’s *ever* had a glow like this.”

“My hair has thickened up and gotten a sheen to it, and everybody tells me how good I look!”

The Purple Rice has been saving Boni money, too! In addition to her other conditions, she had a chronic eye disease that made her eyes stay dry. “My eye specialist had me on a medication that was costing over $600 a month, and I only used two drops a day. Well, I haven’t used it at all since I’ve been on the Purple Rice – Haven’t needed it.”

Saving money is great – but getting your health back is priceless, as Boni can attest!

To hear from others who are eating the Micronized Purple Rice, check out my Facebook Group here: www.facebook.com/groups/karespurplericeeaters