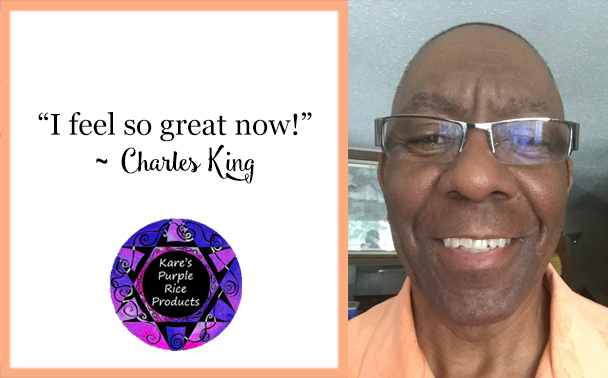 Charles King, 67, an educational consultant and folk artist from Mississippi, started on Kare’s Micronized Purple Rice (MPR) after learning of the dramatic improvements it brought about in his elderly aunt’s Parkinson’s symptoms.

“I learned about MPR from my cousin in California,” Charles says. “She’s 70 and has been involved with health and nutrition for 40-some years. She’s a strong advocate for super nutrition and health food products.”

“Well, my cousin had been eating MPR for a while,” Charles relates, “but what really got me interested was when she told me about the health improvements in her mother — my aunt, who’s 91 years old and has Parkinson’s.”

“My elderly aunt had become uncommunicative,” Charles says, “and they took her to the hospital. The doctors said that because of her advanced age there was nothing they could do, so my cousin decided to try giving her some purple rice powder. Well, my aunt snapped right back! Her doctors were so surprised — they didn’t know what to think!”

“Before that,” Charles says, “I thought I didn’t have enough in my budget to pay for it, but after hearing about my aunt’s improvement, I told my cousin I just had to try it. Where there’s a will, there’s a way!”

“I started on MPR just a couple months ago,” Charles says, “in April of this year. But it feels like I’ve been on it longer than that. I would normally expect something like this to take a while to work, but I could see and feel a difference in just a few weeks.”

“I understand that it doesn’t go to work that quickly for everybody,” he adds, “but it sure did for me.”

“I had gone to my doctor in April and told her about MPR to see what she’d think of it,” Charles relates. “Well, we called and talked to Kare, and afterward my doctor said she was ordering some too — just from that phone call!”

Charles and his doctor learned how this powerful food can fuel the body, giving it more energy to repair and regenerate, and that it takes 60 pounds of rare, heirloom purple rice from Thailand to make just one pound of powerful MPR powder.

“I feel so great now!” Charles beams. “I feel a wonderful clarity in my brain, a kind of calmness.”

“I told my mother, who’s 89, about it after she had learned about her sister’s results — my aunt with Parkinson’s — and now my mother’s using it, too,” Charles says.

“You hear testimonies from other people,” he adds, “but when you see your own relatives having great results with it, that tends to be even more compelling.”

“My brother, who’s in the medical field, is taking it as well,” Charles says, “and my sister, who’s a pharmacist, just called me recently and wants to get started on it, too.”

“I’m a type 2 diabetic,” Charles says, “but I didn’t know until about a year ago. My doctor said I’ll be able to get off insulin soon if I keep up what I’m doing. My mother’s diabetic as well. She’s 89 and has been diabetic since her 30s.”

“Longevity definitely runs in my family,” Charles smiles. “My mother’s aunt lived to be 107! She was in her right mind right up until the end, too — she laughed and joked and was always cheerful. My granddad — my dad’s dad — lived to be 99, and my grandmother lived to be 94.”

“But I know that if I don’t take care of my body,” he adds, “it’s not guaranteed that I will reach those ages even with the longevity genes in my favor. Kare’s Micronized Purple Rice powder really helps me stay healthy.”

“I sleep better now and don’t need as much sleep,” Charles says, “and when I wake up I’m wide awake. I only use an alarm clock now just in case, but I always wake up before it goes off. It’s like a new me!”

“It helps with my attitude, too,” he adds. “I’m thinking more clearly. When faced with stress, instead of panicking, I calmly focus and start looking for solutions.”

“I’m a consultant,” Charles says. “I have a nonprofit organization called Smarty Pants Educational Services, Inc. I’ve contracted with Head Start and public schools for 27 years now. I work with kids, teaching them to use their imagination.”

“One of the good things about MPR is that I don’t have to say anything to people about it,” Charles says. “People I know see me and ask what I’m doing to look so much healthier. They usually say something like, ‘What’s different with you? You look great!’ Often they can’t quite put their finger on it — they just say I look different.”

“I was joking with some friends recently,” Charles says. “I’ve been divorced for a long time, and I said I plan to get married again, and this time I’ll ask God for my mate. But these days I’m looking so young that she’s going to have to be really young to keep from looking older than me!”

“Bottom line is I feel healthier, look younger, and think more clearly,” Charles concludes. “It’s wonderful to feel so much better. My body was so depleted before I started on MPR.

I just kept searching and trying different things. It’s so wonderful to have finally found something that really works!”