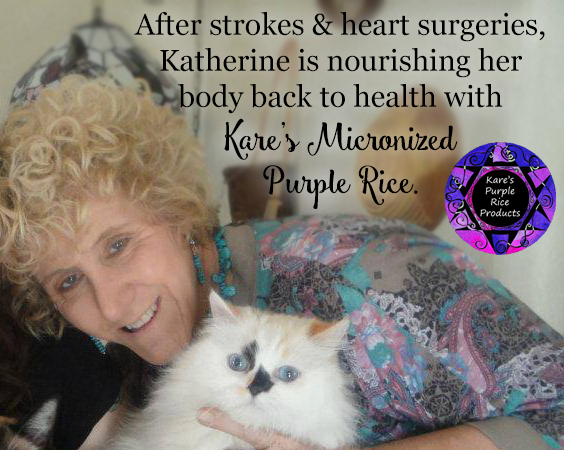 At just shy of 60, Katherine Trinite has suffered two strokes and then four open-heart surgeries within a 9 month period. But with help from Kare’s Micronized Purple Rice, she is recovering remarkably well.

Katherine’s ordeal began in 2012, when she was 57. She was working at a dementia facility in Arizona at the time. She had been experiencing dizziness and shortness of breath, but hadn’t gone to the doctor because she lacked insurance.

“I was having mini strokes and didn’t even know it,” she says. “My job included answering phone calls, and I was accidentally hanging up on people.”

One day, at home, she had a stroke.

“I was walking to the bathroom when my legs buckled and I fell over backward,” she says. “A voice in the back of my head said, ‘Get up! You’re having a stroke!’ Somehow I dragged myself to a chair. I couldn’t talk or move. I just sat there staring straight ahead, for hours.”

The first thing to come back for Katherine a few hours later was hand movement, then speech. “I called my daughter in Texas, but all I could say was yes or no. I staggered over to the table, dragging my leg, and scattered cat food all over. Finally, nearly 24 hours later, my landlady took me to the ER.”

Katherine had a second stroke just six weeks later, at the grocery store. “When I entered the store all of a sudden my leg went dead and I fell. I couldn’t move. But I am stubborn, and by the time I got to the hospital I had willed that leg to move again!”

Shortly after that, in February of 2013, she had her first open heart surgery. Sadly, the doctors accidently failed to remove the heart monitor before closing her wounds and had to go back in, just two days later, to retrieve it!

Three weeks later she flew from Arizona to Texas to stay with her daughter. Once she got there, she couldn’t stop coughing. Turns out she had a fungal infection in her chest, which she’s pretty sure she caught during her earlier hospital stay.

Once again, she was back in the hospital, having open heart surgery.

Then in November 2013, she got another chest infection — bacterial this time — and went in for a fourth open heart surgery.

Katherine spent the next year and a half recovering. In July of this year, she learned about Kare’s Micronized Purple Rice.

“I spent about half an hour talking to Kare over the phone,” she says. “She was so helpful and patient as she listened to my concerns and told me how the purple rice was a food that could help nourish my body so that everything could function better.”

Katherine learned how Kare’s Micronized Purple Rice is milled so fine that its powerful concentrated nutrients are able to be absorbed through the cell membrane, fuel the mitochondria (the cellular battery), and assist in cellular regeneration.

Because of all the toxins from anesthesia and the drugs she had been on, Katherine started out very slowly.

“I started at half a teaspoon per day of MPR, then dropped to a quarter and then just an eighth of a teaspoon for several weeks. Now I eat a half teaspoon three times a day, and it’s working out well.”

“I have more energy now,” she says, “and less joint pain, clearer skin (eczema) and my allergies are even better!”

She is sleeping much better these days, too.

“When I came home from the hospital I was sleeping maybe two hours a night. Then when I began eating the Micronized Purple Rice I started sleeping really deeply. My sleep is back to where I was before all this started, but it’s much deeper and more restorative.”

“My stamina is a lot better, too,” she says. “I used to have to settle into my recliner by 2 o’clock in the afternoon, but now I can keep going until evening.”

Her bloodwork is improving as well; her cholesterol and A1C have come down.

Katherine even has her cats, Shanti and Chaco, on the MPR! “It’s a big hit in this house. Just a quarter teaspoon per cat, once a day. They love it!”

“I’m pleased and can’t wait for more great results,” she says. “Thank you to Kare and all of her health coaches, and to this wonderful, loving and supportive Facebook Group (ww.facebook.com/groups/Karespurplericeeaters). Together we will all be healthy!”

For more information about the Micronized Purple Rice and to get a copy of my FREE E-Book, check out my website: www.karespurplericeproducts.com <3