“I sleep through the night without any problems now.” 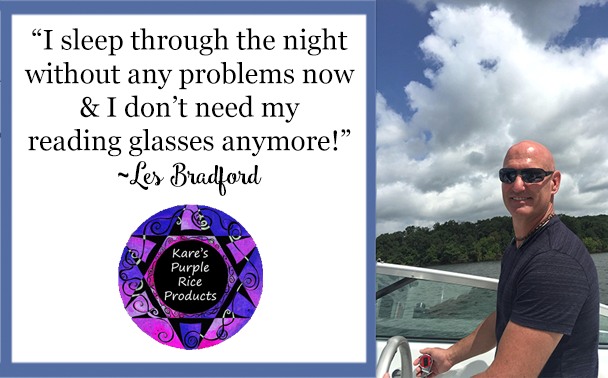 “The first thing I noticed was that my sleep improved,” Les says. “I used to really, really struggle with sleep issues, but now I sleep through the night without any problem.”

“I noticed more energy and better sleep in the first 30 days,” he adds. “I didn’t feel much of a difference for the first three weeks or so, but then I started noticing I was sleeping better, which led to more energy. It must have helped with my melatonin levels or something.”

“I used to not breathe very well at night,” he says. “I’ve never been diagnosed with sleep apnea, but I used to breathe poorly and wake up tired. That has improved a lot, and I feel better now when I wake up in the morning. I can’t say I feel like Superman when I get up, but I feel pretty good.”

“My girlfriend and I started on MPR powder back in November of last year,” Les says. “She’d seen it on Facebook and said we should give it a try. We thought there must be something to this stuff because there are so many great testimonials in Kare’s Facebook group.”

“I’m very openminded,” he adds, “and my willingness to learn about and try something new has led me to much improved health, thanks to MPR and my fitness plan.”

Les learned how this powerful food can fuel the body, giving it more energy to repair and regenerate, and that it takes 60 pounds of rare, heirloom purple rice from Thailand to make just one pound of powerful MPR powder.

“I’ve had a tinge of sadness or depression from time to time in the past,” Les says, “and that has been alleviated. It doesn’t seem to creep up on me anymore like it used to. The MPR helped my mood and did some things for my mind — it gave me an overall good feeling and better energy. My mood is a lot steadier now.”

“I was on Facebook one day reading testimonials,” he relates, “when I read about someone else who had experienced the same thing, and it dawned on me: ‘I don’t have my reading glasses on, yet I can see the screen just fine!’ ”

HIS EMPLOYEE’S HEALTH IMPROVES, TOO!

“One of my employees, a painter named Casey, who’s in his late 20s, was borderline diabetic,” Les says. “He started on MPR not long after I did. Well, he went from a diagnosis of pre-diabetes to being completely out of that stage, which he’s really happy about. He had his blood checked, and the doctors told him it was perfect — no issues whatsoever.”

“Casey’s a hard worker, and he’s got a family, with small boys, so I was very mindful of him in prayer,” Les relates. “His health wasn’t what it should be for his age, and I prayed that God would help him.”

“I told Casey, ‘Look, you’re important to my business, and you’re important to your kids. Give this an honest chance — it will really help you.’ And so he did. He looks like a completely different person now, and he would tell you too that it’s really made a huge difference for him.”

“He had acid reflux (GERD), and that went away completely,” Les says. “He’d had that for quite a while, pretty bad. He eats a lot of sugar — ketchup and stuff like that — and it would always upset his stomach.”

“Today the difference in Casey is like night and day,” Les says. “It’s really hard to comprehend how well he’s done on this — he says he’ll take it for the rest of his life.”

“A few months after starting on MPR,” Les says, “I changed my eating habits pretty drastically. I cut way back on sugar and turned away from gluten foods, cookies, and so on. Now I just have a little bit now and then. I’m way more conscious of what I eat.”

“I also got on a fitness plan a few months ago, and that helped me a lot. It gave me some tools to get away from junk food and sweets. I became more aware of GMOs, bad food, and so on. I’ve lost 14 pounds, and gone from 201 to 187 pounds. I want to lose a few more.”

“I’ve also noticed a more youthful look in my face,” Les says, “and my wrinkles seem to be receding, so that’s been exciting for me.”

“Most everybody says I don’t look my age — they say I look really good for 51. Part of that, though, is that I dress like a 25-year-old,” he laughs.

“I’d love to see what my bloodwork looks like,” Les concludes, “after having been on MPR for about nine months now. Judging by how I’m feeling, I’d guess it’s tip top!”