“Recovery from grief and pain” 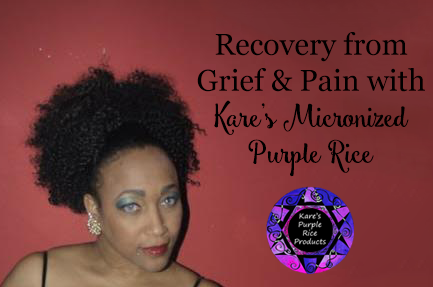 Apache Wolf, 54, felt so grateful for the health improvements she got from Kare’s Micronized Purple Rice that she decided to pay it forward…for a woman she didn’t even know!

Apache found Leslye B. in the Kare’s Purple Rice Eaters group on Facebook ( www.facebook.com/groups/karespurplericeeaters ). Leslye is on a fixed income and felt she could not afford the MPR, even though she badly needs it. Apache decided to gift Leslye’s first month.

“I skipped getting my nails and toes done, skipped my junk food and soda binges, DVD rentals, fast food, etc. It felt so good to pay it forward and help Leslye!”

The two women talked on the phone, and Apache discovered that they shared a common bond — each is recovering from grief over the loss of her partner.

Leslye’s husband had passed away two years earlier, and she has lived alone with her dog, a rescued greyhound, since then.

Apache’s fiancé Eric passed away suddenly on September 10 of this year. “I was devastated, shocked, and in total disbelief,” she says. “He was only 42 years old, and died of a sudden heart attack with underlying diabetes. Normally I would have been in pieces — I would have had to be hospitalized. But the Micronized Purple Rice helped me to cope.”

She started taking her MPR the day she got it, a day or two after Eric’s sudden passing. “It calmed me because normally I am not the type to deal with loved ones passing easily.”

“I am still a mess, but I am a healthier mess,” she adds. “I have had to deal with death in my life, but never like this.”

Apache’s upbringing and spiritual beliefs have helped her deal with her grief, as well. “I am a Black Native American — 50% Indian, 25% Sub-Saharan, 23% Irish, and 2% Asian. I was brought up in holistic healing and herbs and such. We look to the earth for healing and our spirituality.”

This background helped her to quickly grasp the high-vibration health benefits of Kare’s Micronized Purple Rice. She learned how it is milled so fine that its powerful nutrients are able to be absorbed through the cell membrane, fuel the mitochondria (the cellular battery), and regenerate cells.

“I really believe in this miraculous food,” Apache says. “I believe it is responsible for saving lives. My only regret is that I didn’t learn about it in time to possibly help Eric with his health. I truly believe if I had stumbled across this sooner, he would be on his way to healing.”

“I was led to Kare’s Micronized Purple Rice by God,” says Apache. “I had been wrestling with these issues for several years, and when God tells me He is going to heal me, I don’t question the way He does it.”

She has had several major health events in recent years: a fall down stairs in 2007, a car accident in 2011, and surgery in August of this year.

“In 2007 I fell down a flight of stairs and broke my tailbone in three places. There were 14 mahogany steps — very hard! I misstepped at the top of the stairs, and I fell down all the steps, feet first. There’s no way to put a cast on a broken tailbone, so I just had to let it heal on its own.”

Apache also had a bad car wreck in November 2011 in which her back and pelvic bones, front and back, were injured.

“After being in therapy for a year, I was released with 70% of my injuries healed,” she says. “The back doctor wanted to do surgery, but I refused. I had been in severe pain from this until recently, but, thanks to the MPR, these days I barely have any back pain at all.”

“No one knows how it feels to wake up grabbing your lower back, pelvic bones, and tailbone just to get out of bed without screaming — and then one day suddenly jumping up out of bed to run downstairs to catch the mailman at the door…and suddenly realize what had just happened — NO PAIN! I hadn’t even been taking it for a month yet at that point — just a couple of weeks!”

Apache also experienced other health benefits as well: eyesight improving, brown patches on her skin lightening up, and, she says, “clearing the mental fog and boosting my memory to the 10th power!”

“I love truth,” she concludes, “and people need to have the whole truth because we are perishing without the sacred healing knowledge of this incredible food. It is just too powerful to keep from people who need to be healed.”

To learn more about the Micronized Purple Rice and get my e-book, click: www.karespurplericeproducts.com