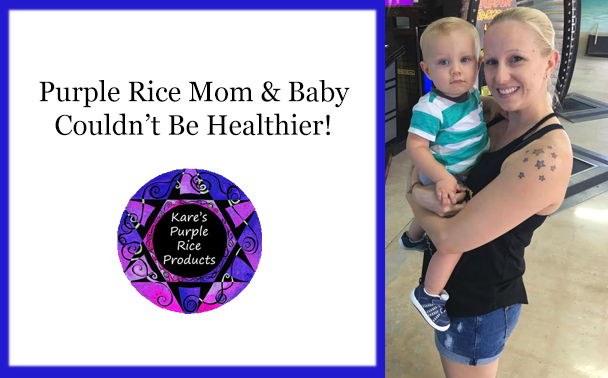 Lesley Burton, 32, and her baby boy Liam,13 months, are the picture of radiant health thanks to Kare’s Micronized Purple Rice (MPR) powder!

Lesley has worked at Kare’s office in Florida since October 2014, and she started using MPR powder at that time.

“I found out I was pregnant about a month after I started,” she relates. “I used MPR throughout my pregnancy and breastfeeding, and I began giving it to Liam, too.”

“When I first started on MPR,” she says, “I was already pretty healthy, but was hoping for more energy and to just feel better overall. It has helped a lot with that — I feel wonderful!”

Lesley learned how this powerful food can fuel the body, giving it more energy to repair and regenerate, and that it takes 60 pounds of rare, heirloom purple rice from Thailand to make just one pound of powerful MPR powder.

“I’ve definitely noticed I sleep a lot better,” she says. “And I feel the extra energy right after I have my MPR — I feel like I just drank a soda.”

“This was my first pregnancy,” Lesley says, “so I don’t have anything to compare it to. But I will say it seemed to be a pretty easy pregnancy overall, with no heartburn or morning sickness.”

“I worked the entire time, right up until I went into labor! Everything was pretty routine with the delivery. I had Liam the next day, and then we stayed in the hospital for three days.”

“I was supposed to be on maternity leave for six weeks,” she adds, “but after about three or four weeks I started coming back in one or two days a week. Then I was back to full time after the six weeks.”

“My energy level was really good!” she adds.

“I was using MPR as I breastfed for a month or so after Liam was born,” Lesley says. “Then I started putting my breast milk in a bottle, and I was supplementing that with formula — because I had to get some sleep.”

“I was putting about a quarter teaspoon of MPR in Liam’s bottle, and he didn’t have any diarrhea or other negative effects from it.”

GOT HER FIGURE BACK QUICKLY

“I think MPR helped me recover pretty quickly,” Lesley says. “I’d gained 49 pounds during my pregnancy, but I was able to get my weight back down in a few weeks. I weighed 115 before getting pregnant, and then, with no dieting, I got back down to 125 a few weeks after giving birth.”

“I eat a pretty clean diet for the most part, so that helped,” she says. “I don’t do a lot of fried stuff, or things like ice cream. I eat a lot of vegetables and fruit, mostly organic.”

“For several months Liam had eczema on his armpits and neck,” Lesley says, “and all over his back and stomach. He may have been having an allergic reaction to laundry detergent or something like that.”

“I tried a baby eczema product on him,” she adds, “but it didn’t do much, so I started putting a paste on made with MPR and water, after Kare suggested that. His eczema gradually healed up, and now his skin is smooth again.”

MORE OOMPH FOR THEIR CHIHUAHUAS, TOO!

“We have two chihuahuas on MPR as well,” Lesley relates, “a boy and a girl. We call the boy dog Dingo, and we think he is nearly 13 — he was a rescue dog a friend found by the side of the road, so he was pretty beat up when we got him. He’s been on MPR ever since I started on it in 2014.”

“Dingo has had cataracts forming for a while,” she adds, “but they only started to get bad recently, so I think MPR helped him be able to see longer than he would have without it. He acts more like our eight-year-old girl dog, Baylee. They both have more oomph now!”

FAMILY & FRIENDS ON IT AS WELL

“My husband Billy has been on MPR for four or five months now,” Lesley says. “We’re both pretty healthy, so we just use it to help us stay healthy, sleep better, and have more energy.”

“I’ve been sharing MPR with others, too,” she adds. “We tell everybody about it! My parents own a mechanic shop, so I leave Kare’s books out for people to look at as they wait for their car to be serviced.”

“MPR helped me through my pregnancy,” Lesley concludes, “and it has given my baby a great start in life. I am ever so grateful to Kare for introducing me to this amazing product!”