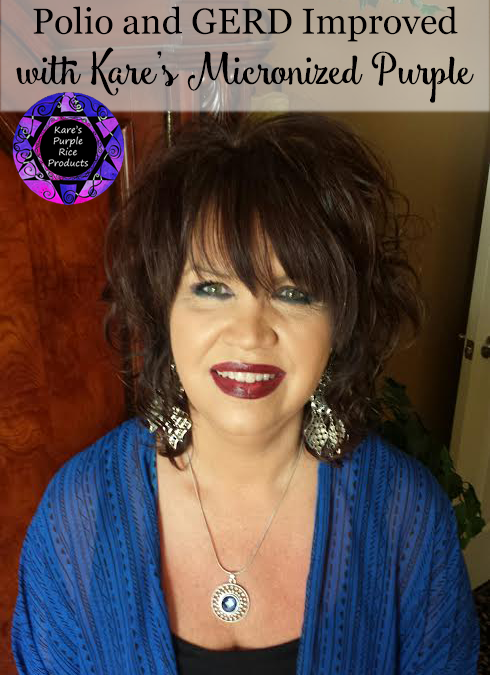 Polio survivor Dottie Konczak is now walking without a cane, thanks to Kare’s Micronized Purple Rice (MPR). Her acid reflux is gone, too!

“My story begins in September 2014,” says Dottie, 60, of Michigan, “but parts of it go all the way back to when I was just three years old, when I was diagnosed with polio.”

“The polio attacked the muscles in my legs mostly, and also my neck and back,” she explains. “I couldn’t straighten my legs or bend my neck down.”

Growing up, Dottie says, she couldn’t participate in sports because her muscles were too weak.

“So I became the artistic one!” she says.

“However,” she adds, “the polio didn’t really seem to affect my life all that much until about eight years ago.”

“Around 2007,” Dottie says, “I started to get muscle pain and extreme fatigue. I’d come home from work and just sit in my chair.”

“In addition to the muscle pain and fatigue,” she says, “I’d noticed things like my leg would give out. So I went to the doctor, and he said it was post-polio syndrome.”

“Anyway, so fast forward to September 2014,” Dottie says. “I started having extreme digestive issues along with muscle spasms in my legs. I developed peripheral neuropathy and extreme weakness — I was a mess.”

In early October of 2014, Dottie says, she was in the emergency room three times.

“By the third time,” she says, “they admitted me and ran a bunch of tests. I was suffering from extreme acid reflux and anxiety.”

The doctors sent her home with a plethora of medications, she says.

“Before that I had never taken anything more than an aspirin. I was so sick, I lost about 20 pounds. I needed to lose it, but still!”

“On top of the acid reflux,” Dottie adds, “my muscles started jerking, all night long, and the medication was giving me nausea.”

“It broke my heart that I couldn’t watch my sweet granddaughter, which I’d been doing for 9 years once a week,” Dottie says. “My daughter had to get someone else to watch her, for 5 months.”

LOOKING FOR A NATURAL SOLUTION

“I like to try natural things,” Dottie says, “so I went to my chiropractor, who’s a dear friend I’ve known for years, and I told her I was looking for natural remedies because I needed to get off all these medications.”

“She started me on some natural remedies, and I slowly weaned myself off the prescription meds, with my doctor’s approval. He wasn’t too happy at first, but it’s my body, you know?”

The natural remedies started to help with the acid reflux, Dottie says, “but I was still having a lot of nerve and muscle pain.”

“I was walking with a cane,” she adds, “but only very short distances. My husband took me furniture shopping one time, and I love furniture shopping, but I couldn’t make it around in the store. It was very disturbing. I thought, you know, my legs are never going to be the same again.”

“Finally,” Dottie says, “I called Kare’s health coach line (727-798-8764) and spoke to Helen Harvey, a lovely woman, very kind and down to earth. She told me about her journey with the Micronized Purple Rice, and I was amazed.”

“My life has become so much better now. I don’t need a cane anymore, for one thing. Now I can even climb bleachers to watch my granddaughter play basketball. If you’d told me a year ago I’d be doing that, I’d be like, there’s no way!”

“I have more energy now, too, and my acid reflux is gone,” Dottie adds. “I really thought I was going to have to deal with it for the rest of my life.”

“Before MPR I also had terrible insomnia,” Dottie adds. “I tried various sleep remedies, but nothing helped. Now I sleep through the night.”

Dottie’s hair is getting darker, too, she says.

“My sister-in-law cuts my hair and colors it, and she told me recently, ‘Your roots are getting darker!’ They’re still gray, but they’re darker. My husband has noticed it, too.”

“I also feel a sense of calm and happiness that I didn’t feel before I started eating MPR,” she says.

“I’d gotten off my anti-anxiety medication, and my daughter said, ‘You’re not anxious about anything anymore.’ I told her it was the MPR, and she said, ‘Keep eating it — you’re so calm!’ ”

“This has been such a miracle for me,” Dottie concludes. “I really feel God has blessed me in so many ways, and this is one of them. I plan on eating it for the rest of my life!”