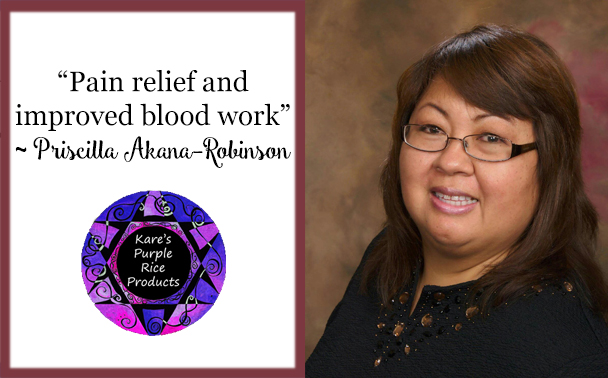 Priscilla Akana-Robinson, 53, struggled for years with pain and other symptoms from two devastating health events, but today she is energetic and nearly symptom-free, thanks to Kare’s Micronized Purple Rice.

Priscilla, an entrepreneur with over 20 years of business experience, lives in Washington state but travels all over lecturing about the harmful effects of EMF radiation from exposure to cell phones and wifi technology.

She relates that her first health crisis was a pituitary tumor that resulted in vision problems, hormone challenges, loss of energy, and inflammation.

“The tumor had been growing since probably 1999 or so,” Priscilla says, “but even though I had lots of tests, my doctors didn’t detect it until 2005. By then it was the size of a golf ball and had affected my optic nerve. At that point I’d already lost my peripheral vision.”

“The surgeon was able to scrape off the tumor and save my pituitary,” she says, “but it was dysfunctional. After that I had major hormonal challenges, because the pituitary controls so many hormones. This imbalance caused severe loss of energy and full body inflammation.”

“Then, in 2011,” she says, “I was in a bus accident resulting in severe neck and back injuries from whiplash. It felt like someone had stuck a piece of wood into my shoulder blades, and the pain made it hard to function.”

Since then, Priscilla says, she has been trying to get her pain levels down using holistic solutions.

“Being a Pacific Islander,” she relates, “I was able to reach back into my roots and find some traditional herbs that I felt could replace the conventional medicine, and they had helped, but had not brought my pain down to a level I could manage.”

She learned how this powerful food can fuel the body, giving it more energy to repair and regenerate, and that it takes 60 pounds of rare, heirloom purple rice from Thailand to make just one pound of powerful MPR powder.

Priscilla took the plunge in December and ordered her MPR in time to start on New Year’s Day, she relates.

“When I try a new natural product,” she says, “I like to try it for at least six months to a year to really give it a chance to work.”

“The first thing I noticed,” she relates, “was that within three days, my pain level started to go down, and on my second or third day I started to feel a lift, a looseness — and a bit of pain relief in my neck and joints.”

“About a week after that, I noticed my flexibility was improving, and I was about 80 percent pain free — a big change!”

“I’d had blood work done back in September, which gave me a baseline,” Priscilla relates, “and then recently I had it done again. My biggest concern was for my thyroid function and hormone levels.”

“Well, I had to call Kare to share the excitement, because I was so thrilled when I saw my recent blood work. Everything was excellent! My doctor said, ‘This is amazing! And you’re not taking any medicines?’ I told her no, absolutely not. All I did differently during that time was to add the MPR. I can’t shut up about the results, because they’re just phenomenal!”

“I’d been trying to recover from achiness from being on statins for cholesterol before that,” Priscilla says. “They’re so bad for your body, bad for your bones and muscles. It took me a while to get over that achiness after I stopped taking them.”

“The higher energy level started at about a week in,” she says. “When you have that balance, you have more clarity, and your energy is sparked even higher.”

“Another thing I’ve noticed is really good sleep. One of the downfalls with pain is that you can’t sleep. Since I’ve been on MPR my sleep has improved a lot. Everything falls into place when your body becomes balanced — when you have energy. And on days when I overwork, I recover faster.”

“MPR has also made me calmer and helped with my hypertension,” Priscilla relates. “In the beginning of last year I was suffering from anxiety due to hormone imbalances, but I calmed down with help from MPR.”

“My flexibility has improved dramatically as well,” she says. “Due to my injuries I was not able to make a fist, and my hands were like claws, but now I can clasp things just fine — pretty amazing, really!”

“In the past I’ve had to use a lot of pain meds to manage,” she says, “but since starting MPR I haven’t had to use any. That’s huge!”

OTHER FAMILY MEMBERS USING IT TOO!

“My husband and daughter are using MPR as well,” Priscilla says, “and lots of friends are on it too. My husband’s energy level has renewed, and he’s not as tired when he comes home from work. He lifts weights, and now he’s lifting more than he had been.”

“I work with a lot of holistic practitioners and medical practitioners in my business,” Priscilla says, “and I decided to introduce this to them. I know what it feels like to be sick and in pain, so I just want to be able to share it with people so they can feel better!”

“I believe our bodies were designed to heal themselves with the right nutrition, and MPR is a big help. I also believe God leads us to things that are good for the body, and that’s why I was led to Micronized Purple Rice.”

“Some people say MPR is a bit pricy,” she concludes, “but I’m willing to make sacrifices in other areas of my life to make sure I always have it. To invest in having good health, in not having any pain — to me that’s so worth it!”