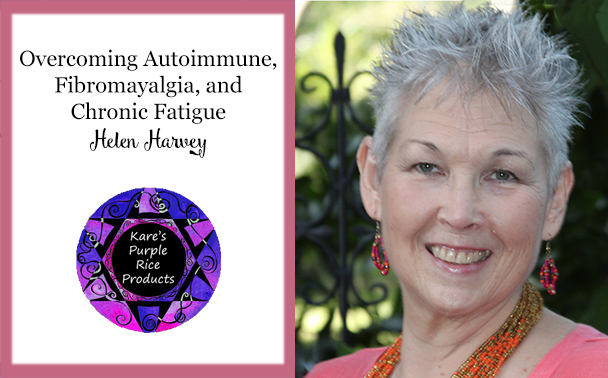 With her warm and compassionate nature, and her amazing story of recovery from car accident injuries and autoimmune disorders, Helen Harvey is a natural as a health coach for Kare’s Micronized Purple Rice.

“I absolutely love being a health coach!” Helen beams. “I really love people, and I’m a true Southerner, so I love to talk. I’m interested in hearing people’s stories and sharing my experiences with them. It’s all about that human connection, and just letting them know you care and you’re interested in their progress. It’s a huge, huge blessing!”

“Now we also get to keep in contact with these people in the Kare’s Purple Rice Eaters Facebook Group,” Helen adds. (www.facebook.com/groups/karespurplericeeaters) “That’s what I love about the Micronized Purple Rice (MPR) and being a health coach. It gives people their lives back — it gave me my life back. Everything about my life has changed 180 degrees!”

“The accident resulted in major injuries and ended my career in advertising sales,” she relates. “I had three back surgeries, a 3 level fusion and 12 knee surgeries, which resulted in 24 years of chronic, debilitating pain.”

“Several years after the accident, I started experiencing neuropathy in my feet, and it got progressively worse,” Helen says. “At times it was difficult to walk. My feet would be numb, yet burning and tingling at the same time.”

“It got so bad I had to sleep with my feet outside the covers,” she says, “because I couldn’t stand to have even a sheet touching them. Then six weeks after I began eating MPR, I awoke one day to find my feet covered up, which was absolutely astonishing to me.”

“And now, after having eaten MPR for about 11 months, my neuropathy is over 80 percent better. There are times I forget I even have it — as compared to this same time last year, when my feet felt like they were on fire all night long! For it to have improved that much is, to me, a miracle. But then, I’ve had a lot of miracles!”

“About 10 years ago I was diagnosed with fibromyalgia and chronic fatigue syndrome,” Helen says. “I was like, ‘Isn’t it enough that I’m in such pain?’ Often chronic pain leads to autoimmune disorders; it disrupts so many things within the human body.”

“I’ve seen so many different doctors and natural practitioners, taken many supplements” she says, “but nothing helped. I’d get short-term relief, but then the pain and fatigue would be right back.”

The 18 months before she started eating MPR, Helen says, “I was in bed pretty much the whole time. I was either in severe pain or didn’t have the energy to get up — or both. I kind of existed between my recliner and my bed, and, quite honestly, I couldn’t really take care of myself. It was one of the most depressing periods of my life.”

“Then after about the 3rd month of eating MPR,” she says, “I realized one day that I didn’t have the fibromyalgia pain anymore. Fibro pain is an all-over pain — it’s like every inch of you hurts: joints, muscles, everything. Since that three-month period, I’ve had no symptoms of chronic fatigue or fibromyalgia. It’s like they have just left my body!”

Eczema had long been a problem for Helen, too, she says. “Ever since I was a teenager, I’ve had really bad eczema on my hands and legs. I avoided certain soaps that irritate it. My hands would crack and bleed and get really raw. It took six months or more on MPR for that to go away, but now it is completely clear.”

“We’ve been friends for many years,” Helen relates, “and Kare said, ‘Hey, we miss you, and we want you to come talk with us about Purple Rice and maybe coming to work here.’ Well, I started laughing and said, ‘Go to work with you? I can’t even get out of bed!’ ”

“I went for a visit and left with a bottle of MPR. I promised to return the following Monday and start work. But I didn’t know how that was going to happen, because it took everything I had just to go for a brief visit.”

While visiting Kare, Helen learned that it takes 60 pounds of this heirloom purple rice from Thailand to make just 1 pound of this powerful food.

Helen began eating the MPR as soon as she got home, she says.

“Between Tuesday and Saturday, it was like a light switch had flipped on in my body, and I suddenly had energy! It was vibrant energy, like when you’re young and healthy. I know now that it was all about that ATP production, lighting up our mitochondria.”

The following Monday, she went to work in Kare’s office. “I could only work three hours a day because I still had pain,” she explains. “The energy was there, unfortunately so was the pain. The pain didn’t start to go away for two to three weeks. Over the next couple of months, I got better and better and was able to work more hours each day.”

“After a few weeks, I slept through the night for the first time in years. I’d been having trouble falling asleep and staying asleep because of all the pain. It was so exciting to fall asleep and sleep straight through for eight hours!”

“I was pretty shocked at how quickly my body was recovering,” she says. “It was so incredibly fast with the Purple Rice. In the past, overdoing it a bit would have taken me to bed for weeks, but now my body recovers quickly.”

FEELING GOOD, THANKS TO M.P.R.!

“These days I have energy all the time, even if I’m in pain,” Helen says. “Ever since I was three days into starting on MPR, the energy has been consistent.”

“You also have to be conscientious about what foods you’re putting into your body,” she says. “We all do. It’s such a battle for so many of us these days, and often we don’t know what we’re putting into our mouths because of misleading labeling laws.”

Back in 2011, Helen says, after a breast cancer scare, she completely changed her diet, eliminating gluten, dairy, sugar, soy, corn, and, in fact, all processed foods.

“Because of my pain and inflammation, I also avoid nightshades — potatoes, tomatoes, eggplant, and peppers — even though we have wonderful tomatoes here in Florida, and eggplant is one of my favorite vegetables.”

“I also drink a lot of good pH balanced water,” she adds. “Drinking extra water helps the MPR get through our whole body and keeps our cells hydrated and the cellular wastes carried away.”

Helen even has her cat on MPR, she says. “My gray tiger cat, Chip, is 16, and a while back he stopped eating and drinking. I rushed him off to the vet, and they did tests but couldn’t find what was wrong. They wanted to put him on medication, but I said no, I’m going to put him on MPR. I handed the vet Kare’s book, and she didn’t know what to think.”

“But I started giving Chip the MPR, and he perked right up. Today he’s pretty healthy for a 16-year-old cat! The vet was shocked when she saw how much better his new blood work and urinalysis had improved after a few months. His mobility has improved, and he walks much better.”

Life is looking bright indeed for Helen these days!