Why Oprah is Wrong About Bread 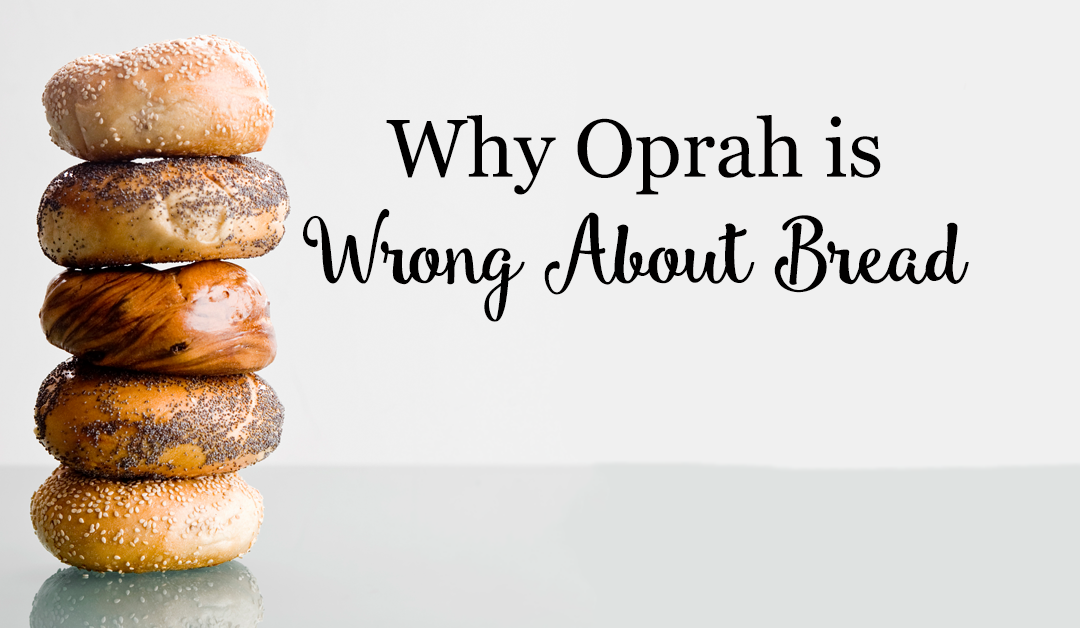 And while grains can be hard to resist, from fancy artisan bread with rosemary baked into it to a steaming plate of spaghetti topped with meaty tomato sauce, unfortunately they’re addictive and cause a slew of health problems.

So while Oprah tells you it’s okay to have bread every day, I suggest you limit your grains.

Now, you may be asking, if grains are so bad, what about rice, and specifically, what about Kare’s Micronized Purple Rice?

First, rice in general is the least problematic of all the grains. Unlike corn and soy, most of which is genetically engineered, most rice is not.

And rice does not have any of the three problematic aspects of wheat: gluten, wheat germ agglutinin, or amylase trypsin inhibitors.

Wheat is the most problematic of all the grains because of these three factors, and more and more people have problems with wheat because of changes in modern agriculture.

The second reason Kare’s Micronized Purple Rice (MPR) is healthful despite being made from grain is that this powerful powder comes from only the heart of the purple rice grain. The husk and most of the starch are eliminated, and only the precious nutrients remain. MPR comes from an heirloom strain of purple rice grown in Thailand, a country that doesn’t allow GMOs — genetically modified organisms. (The whole purple rice sold in stores often comes from China, and much of it contains contaminants such as arsenic from pesticides.)

Every batch of Kare’s Micronized Purple Rice is meticulously tested. It is processed in Thailand and bottled in the United States, in an FDA-approved facility. This is the purest food you can put in your body. I’ve been eating it for two years, and I’ve done nothing but anti-age and improve my health!

It actually takes 60 pounds of purple rice to get 1 pound of these precious nutrients!

Then, and this is really the big secret to why it works so well — it is milled down to the size of a micron using a multi-million-dollar machine. And as new cells are generated, they are healthier, which helps our bodies become healthier and improves many conditions.

It comes down to this: Eat your Micronized Purple Rice, but limit all other grains.

1. High fructose corn syrup is made from corn. This heavily genetically modified grain tops the list of foods the U.S. government pays farmers to grow. And guess what is made from corn? High fructose corn syrup (HFCS).

Government subsidies make corn dirt cheap — much cheaper than sugar — so manufacturers of processed foods use it extensively, because it’s much more profitable.

The obesity epidemic can be linked directly to this cheap sweetener. HFCS is found not just in sweet foods, though, but is also in nearly every processed food available today — everything from ketchup to soup and juice drinks. It’s even found in medicines such as cough syrup!

2. Most corn and soy are Genetically Engineered.

According to the USDA’s latest figures, 94 percent of soy and 88 percent of corn grown in the United States are genetically engineered. The reason GMOs are bad for you is that GE food relies on dangerous pesticides and herbicides, and increases corporate control over the food supply.

Monsanto’s Roundup (glyphosate) herbicide works in tandem with “Roundup ready” GMO crops — crops that are genetically engineered to withstand this toxic herbicide. It is sprayed heavily on food crops, and then the weeds die but the crops don’t. Problem is, glyphosate is a known carcinogen, and has been strongly implicated in leaky gut syndrome and other health problems as well.

GMOs have been outlawed in many parts of the world, but due to corporate lobbying and government corruption, they are still used heavily here.

Many people think whole wheat bread is good for them, and for years that’s what nutritionists taught. But in fact, it’s not much better than white bread. The glycemic index of whole wheat is higher than that of a candy bar!

As you probably know, high-glycemic foods cause a rapid rise in blood sugar and insulin. This causes inflammation and increases your risk for cancer, heart disease, Alzheimer’s, fatty liver, and diabetes.

4. Whole wheat can even cause heart disease!

And what is one of the worst culprits in raising your small dense LDL? Wheat! That’s because it contains amylopectin, a starch that triggers an increase of these dangerous small dense LDL particles, which can clog blood vessels.

A study published in JAMA (the Journal of the American Medical Association) showed that people with higher levels of small dense LDL have a 300 percent greater risk of heart attack!

Many doctors believe it’s the number one risk factor for heart disease in the United States.

That’s because in addition to the rapid increase in blood sugar, wheat also produces specific compounds that bind to morphine receptors in the brain.

In addition to creating that well-fed feeling of slight euphoria, these opiates cause a repetitive cycle of cravings – for more grains!

One study showed that people who eat wheat consume an average of 400 more calories per day. That translates to a possible weight gain of as much as 40 pounds per year!

Remember that 94% of soy is genetically engineered. But that’s just for starters.

Soy also contains high levels of goitrogens, compounds that inhibit the thyroid’s ability to use iodine. This can lead to hypothyroid conditions. Many women especially suffer from hypothyroidism. It can lead to weight gain, low energy, and lowered immunity.

Soy also contains plant estrogens in the form of isoflavones, which raise estrogen levels and lower testosterone levels. This can lead to many health problems, including cancer.

I want you to know these facts—so you can make intelligent and informed decisions about how these foods impact your health.  And next time you’re craving pizza, you may decide you and your health are worth skipping it for more natural, less processed foods that will support your health and wellness.

As always, I’d love to hear from you.

Are you limiting your grain intake?

What’s the number 1 reason why?

Let me know in the comments.