“Newlyweds thrive with a little help from KPR” 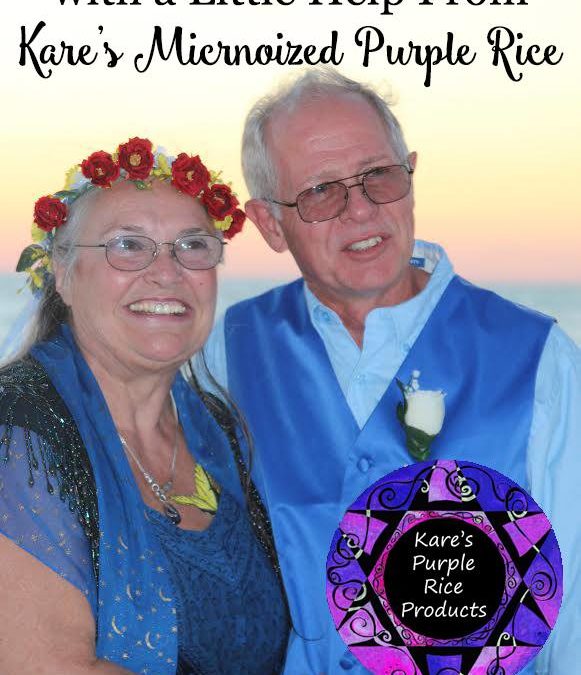 Bonnie McClelland (now Oaks) never expected to find the love of her life in her 60s, but she did. And thanks to Kare’s Micronized Purple Rice (MPR), she and her husband Ron, 62, are thriving!

“We met via a dating service,” Bonnie says, “but not an online one, which is kind of funny because we lived nearby. We both lived in the same part of Florida for many years, but had never met!”

“Ron worked for the school board as a cabinetmaker and recently retired, and I’m a massage therapist and colon hydrotherapist. So our paths probably would have never crossed.”

WEDDING ON THE BEACH!

“In October 2014 we got married,” Bonnie beams. “We had a beautiful beach wedding, and in the pictures I have the most humongous smile plastered on my face. We both just glow!”

“So yes, we’re newlyweds — they saved the best for last! Ron’s awesome. We both said we’d never get married again, and I hadn’t been married in 30-odd years, but when the right person comes along, you just know it. I want to spend the rest of my life with this man.”

GETTING STARTED ON MPR

Bonnie has been a massage and colonic therapist for many years, she says. In fact, that’s how she met Kare Possick.

“We met in a waiting room about 25 years ago,” Bonnie explains, “and because of my work and hers we kept running into each other all the time and then eventually became friends.”

Bonnie had noticed how much better Kare’s husband, Charles, was doing during his therapy session … and when she asked him what he was doing different…he told her all about MPR not long after he had started eating it himself in 2014.

He told Bonnie how this powerful food facilitates healing in the body, and that it takes 60 pounds of heirloom purple rice from Thailand to make just one pound of MPR.

“When I first started eating MPR, right after our wedding, I was pretty exhausted from all the festivities, and my energy levels were down. That was really the first thing I noticed after I started eating it — the pickup in my energy. I’m very attuned to my body, so I noticed a difference pretty quickly.”

“I’ve used MPR externally, too,” Bonnie adds. “It works very well on cuts, bites, etc. One time I had a rash on my foot, and I mixed MPR with frankincense oil in a coconut oil base. It took away the blistering almost immediately. I noticed a big difference the next morning.”

“I’ve known Kare’s husband Charles for almost as long as I’ve known Kare, and I think that for age 74 he is doing fantastic! He’s been through so much, with his kidney and all. I’ve been amazed at how much his health has improved, including even coming off his diabetes meds after having it for 35 years!”

USING MPR IN A MOST UNUSUAL WAY

“I’ve been using MPR in colonics,” Bonnie says, “just for myself and my friends, not for my clientele. And boy does that help tremendously in getting the bowels to move, and you just feel fantastic overall.”

“It also feels good drinking MPR,” she says, “but it works even better taken with an enema. The rectum has more receptors than any other area, so if you want to get something into the body quickly, the fastest means of delivery is via the rectum. Also, when you bypass the stomach, you bypass that high acidity, so the MPR doesn’t have to make it through all that — it goes directly into the bloodstream to where the mitochondria need it most.”

“If you’re not feeling good,” Bonnie says, “I’d highly recommend giving yourself an enema with MPR in it. You can use an enema bag with warm water and about 1-2 teaspoons of MPR — the same amount you’d normally use orally. You’ll be amazed at how much better you’ll feel pretty quickly.”

“When I eat MPR, I run it through my teeth,” she adds, “because gum health is so important. I would rather drink it in the powdered form than take capsules, and my husband and his parents prefer it that way as well.”

“Ron’s parents are in their 80’s,” Bonnie says, “and his dad had open heart surgery in October 2014. With help from MPR, he made it through with flying colors! Before he started on it, I noticed he wasn’t getting up from the table as fast, and he was complaining about aching all over.”

“Since they both started eating MPR on a regular basis,” Bonnie says, “we don’t hear them complain as much. Don’t get me wrong — they’ve never been big complainers — but now they just don’t mention any health issues.
They get around a lot better and are feeling much better overall.”

“Ron had never known about alternative health care until he met me,” Bonnie says.

“He used to be in pain all the time, but not anymore. He was in a bad car accident in his 20s, and his low back was just a mess. But he’s been having chiropractic treatments and a lot of massage work and has definitely improved. I believe MPR has played a big role in that, too.”

“He’s been able to lower his blood pressure meds, too,” she adds.

“Our love life has improved thanks to the MPR, too,” she says. “We’ve noticed that our lovemaking seems to last longer than before. When I noticed that, I told Ron, ‘Oh, you’re going to get MPR every day, baby!’ ”

CRUISING INTO A BRIGHT FUTURE TOGETHER

The fun-loving couple went on an extended RV trip for their honeymoon, Bonnie says.

“We also went on a cruise to Alaska for about a week and forgot to take our MPR with us. We’d gotten out of the habit of eating MPR and weren’t even thinking about it. Well, we both caught a cold — in July!”

“So as soon as we got back to our RV, the first thing we did was start eating our MPR again, twice a day. We both kicked the cold in a day or two. It was amazing how quickly we both flipped around and felt better.”

“That was the incentive for us, so we’ve been pretty regular with eating our MPR ever since then.”

“After that we went on another cruise,” Bonnie concludes, “but this time we brought our MPR!”