“From needing help up the stairs to RUNNING with KPR” 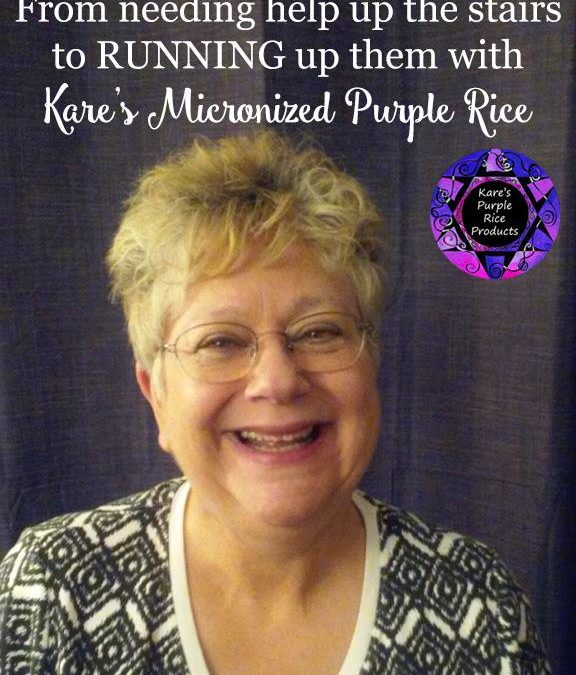 Debbie Crowe Duffy, 63, has given her celiac disease a swift kick, thanks to Kare’s Micronized Purple Rice.

She’s gone from needing to be helped up the stairs, to being able to RUN up them!

“The Micronized Purple Rice (MPR) has lightened the load for me in so many ways,” says Debbie, who also suffers from osteoarthritis and heart trouble, among other things. “It gives you a better quality of life with what you have.”

Debbie and her husband Tom live in Michigan with their cat Nikki, and they’re all on the rice — even Nikki!

After first hearing about MPR back in April, Debbie wanted to know more. She learned that it takes 60 pounds of heirloom purple rice from Thailand to make one pound of this powerful wellness product. The most nutritious part of the rice is milled so fine that its concentrated nutrients can be absorbed through the cell membrane, where they light up the ATP in our mitochondria (cellular batteries), and assist in cellular regeneration.

She’s been on it for seven months now, but remembers all too well just how bad things were before.

“I’d been having lots of pain from celiac disease,” she explains. “I’m allergic to gluten, and even a few bread crumbs could set it off.”

Celiac is an autoimmune disease that causes people’s immune systems to attack their own cells. “Any time I’d get contaminated with gluten,” Debbie says, “it would affect all my joints and bones. Sometimes I couldn’t walk; I could barely move. I had brain fog, too, and pain, pain, pain. Plus I have a bad back and osteoarthritis, so that didn’t help.”

Her husband Tom has a potato chip delivery route, and Debbie often helps him. “When I’d get home,” she says, “I could barely do anything. I could hardly get up the flight of stairs to my bedroom — he’d have to help me get out of the car, get me up the stairs, and get me undressed and into bed, because I always had so much pain.”

“When I read Kare’s article on Facebook back in April,” Debbie says, “I thought, well, let’s try it. Within a couple weeks, the MPR had already started to work. The first thing I noticed was more energy. And the second thing — no more headaches! I used to have terrible sinus headaches just about every day, but that was one of the first things that cleared up.”

Debbie has several walkers and wheelchairs, she says, “so if we’d go anywhere, Tom would have to put me in a wheelchair if it required much walking. But that improved quickly. I got my first order of MPR on April 20, and we went to my grandmother’s 100th birthday celebration down in Georgia on May 5 — Cinco de Mayo. On the way back we stopped at a flea market, and I walked for over two hours! Normally I couldn’t have walked more than 10 or 15 minutes without needing to sit down. That’s how quickly the purple rice started to work for me — about three weeks!”

“I could now sleep through the night,” she adds, “whereas before I was usually up three or four times a night to pee. It took care of that ‘girl bladder’ problem — when you sneeze or laugh too hard. I don’t have that anymore.”

The MPR even helped her lose weight!

“I lost 15 pounds in just a couple months, because it had curbed my appetite. Before, I always ate and ate, because I was always hungry. But with the purple rice, I didn’t need to eat at night anymore. I also didn’t need as much per serving, and I didn’t want seconds after meals.”

Debbie fondly remembers a very special day. “One time Tom watched me as I was coming downstairs, and he looked up at me with a big smile on his face and said, ‘You look different!’ I asked him how, and he said, ‘I can’t quite put my finger on it. A glow!’ ”

Tom is feeling much better now too, she says. “We used to have to sleep in separate bedrooms because of his snoring and restless leg syndrome, but now we’re back in the same bed. His snoring is much improved, and he’s not tossing and turning. The thin areas in his hair are filling in, too.”

“I went to a dentist after I’d been on the rice for about six months,” she says. “Well, it turned out I had no tartar, no plaque, no cavities. The dental hygienist went gaga over this! She said, ‘I have never seen a patient not have ANY tartar or plaque!’ And it had been a year since I had been been to the dentist!”

“Also, my eyes are getting better,” she says. “I have cataracts, but they are improving. I seem to not need my glasses and can see my TV better.”

“I look better, too,” she beams. “My face has toned up, and I don’t have turkey neck! I was starting to get it, but it’s gone now. My eyebrows used to be very sparse, but now they are full, and they’re growing back dark, not gray.”

Her hiatal hernia is much improved, too. “I have hiatal hernia, but I haven’t had an attack since I’ve been on purple rice! A hiatal hernia attack is like a heart attack — you’re on the floor panting, and the pain is indescribable. It’s right behind the breastbone, so you might think it’s a heart attack, but it’s not. I had a heart attack three years ago, and there’s a big difference. My heart’s good now, except I had high triglycerides and cholesterol before starting MPR. I’m going back for more blood work next month, so I’ll find out if that’s improved.”

Probably the biggest thing Debbie has noticed, though, is how quickly she recovers now.

“Before, it used to take me a full week to recover from a gluten contamination. Now it takes 24 hours. I also have a bad back, and when it would go out on me it used to take four to eight WEEKS to recover. Now it only takes four days. The last time it happened was in September. I still had pain, but it wasn’t that unbearable ‘I can’t move’ pain. And it was gone in four days!”

Recently Debbie started feeling worse again, she says, but it was because she had cut back to just a teaspoon a day.

“Kare told me to add more MPR and drink more water,” she says, “so I decided to give my body a big boost. I’m now taking a tablespoon three times a day for a while, and I’m seeing a huge difference. It feels great to give my body that extra shot, to recharge my batteries, so to speak. I started drinking infused water, too, and it’s delicious, which makes it easier to drink more. That helps the MPR do its job.”

Debbie says her cat Nikki is doing much better thanks to MPR, too. “Nikki will be 14 on Valentine’s Day, and she even has a heart-shaped spot in her fur! She runs around like a kitten now, but she almost died last year. She had a growth that had roots wrapped around her jugular, and she had to have major surgery. I give her a quarter teaspoon of MPR every day — she loves it! I mix it in water and spray it on her dry food.”

“I will NEVER stop using the purple rice,” Debbie concludes. “If I wasn’t taking it, I’d be spending money on medicines and who knows what all else. I feel better now than I have for years. It’s worth every penny!”

For more information about Kare’s Micronized Purple Rice, and to watch the videos and get the e-book, check out: www.karespurplericeproducts.com