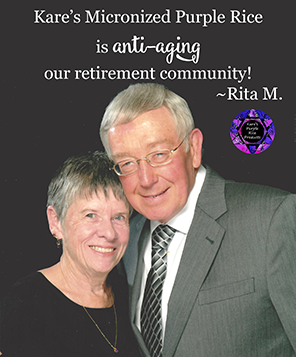 At 75, Rita Mannebach is teaching people in her retirement community about a natural way to anti-age and feel younger … and she is living proof that what she is teaching really works!

“I love to facilitate groups and interact with people, so I am back in the saddle again!” beams Rita – who was a school social worker and elementary school principal before retiring with her husband Al to Stonecrest, an adult community in central Florida.

These days she is excited and happy to be doing a different kind of teaching—about how to grow young and vibrant—something nearly everyone in her community has an interest in.

She and Al started eating Kare’s Micronized Purple Rice Product about five months ago, after Rita saw an article about it at the doctor’s office.

“I was excited and hopeful after reading the article,” Rita says, “and Al agreed he would do it with me.

We loved it and began telling our friends about the purple rice. I really didn’t plan for any of this to happen, but now I’m teaching people about health and wellness!”

When they had quite a few of their friends eating the rice, Rita and Al invited Kare Possick to come out to their community center for a talk. Kare shared how the product had recharged, repaired, and regenerated her husband, herself, and so many of their friends.

Kare also brought along a doctor from the company who explained how the Micronized Purple Rice nourishes the mitochondria (or cellular batteries) so they can begin functioning like they did when they were younger.

The body has the ability to heal itself when it is properly nourished but today very little nutrition gets into the cell – the Micronized Purple Rice does!

“About 80 people came out, so it was a big success,” Rita says, “and many of them are now eating the Purple Rice!”

She and Al followed up with a small, informal gathering recently so they could support each other and tell about their experiences with the Purple Rice.

“One of the women that had come to Kare’s talk came back last week, and at first I didn’t recognize her!” said Rita.

“She introduced herself, and I said, ‘Oh! You had glasses on last time, didn’t you?’ I thought maybe she was wearing contacts.

She got this little smile on her face, and she said, ‘Well, after I’d been eating the rice for a while, I was wearing my glasses and my vision was blurry. But when I took them off, my vision was clear! I’ve been able to stop wearing glasses!’ ”

“As for me,” Rita says, “I feel a younger kind of energy, more stamina, and just a general sense of well-being. My triglycerides dropped over 50 points. Also, my digestion has improved, and now I can eat peppers and onions again.”

Al had been having problems with ankle swelling, she says. “It was not severe, but noticeable. He used to wear a magnetic ankle bracelet that was getting way too tight. After two weeks on the rice, that swelling hasn’t been an issue anymore.

His doctor also had him on diabetes medication. Now he’s taking only a third of the medication he had been on, and hopes to be off it soon. He also doesn’t have the craving for sweets that he had before. And… his barber even commented on his thicker and shinier hair, too!”