“MPR literally gave me my life back!” 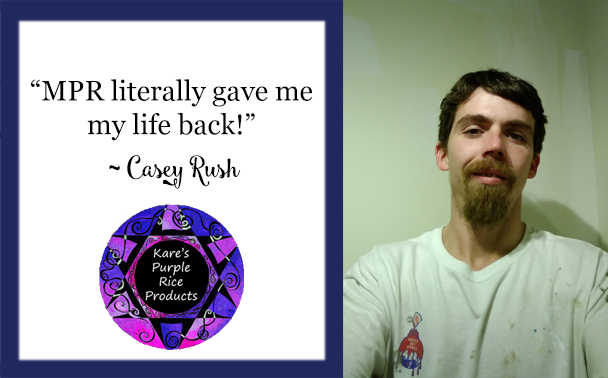 Casey Rush, 30, of Arkansas is a healthy young man today, but before starting on Kare’s Micronized Purple Rice (MPR) powder, he was sick for more than two years, weighing as little as 115 pounds.

“At one point I was vomiting every day, a couple times a day,” Casey recalls. “All kinds of things started going wrong, and my doctors couldn’t figure out what was ailing me.”

“But MPR has helped me tremendously,” he relates. “It literally gave me my life back!”

“I lost a lot of weight while I was sick,” he explains, “and was looking very unhealthy. I’m six feet tall, and I normally weigh around 155 to 160, but I’d gotten down to about 115 to 120. Now I’m back up to my usual weight again. It’s been a complete turnaround.”

CASEY’S BOSS TOLD HIM ABOUT MPR

“I paint houses for a living,” Casey relates. “My boss, Les Bradford, who’s also a good friend, was very concerned about me. So about seven months ago he asked me if I would try MPR to see if it would help.”

“Frankly, I was ready to try anything,” Casey recalls, “because I really needed help. I was barely able to work four or five hours a day, and I had no energy. After working five hours, I’d be so exhausted that I was falling asleep trying to drive home.”

With help from Les, Casey learned how this powerful food can fuel the body, giving it more energy to repair and regenerate, and that it takes 60 pounds of rare, heirloom purple rice from Thailand to make just one pound of powerful MPR powder.

“I’m not really sure what caused my drastic weight loss,” Casey says. “I was having blood sugar issues and acid reflux, but there were so many other things that just hit me one after another that I don’t really know which one it was. I know I lost my appetite for a long time. I had no appetite at all. But I do now!”

“The first thing I noticed was my acid reflux improving,” Casey remembers. “It went away completely after just a few weeks! Occasionally I’ll get a little bit of burning, but I just burp and it’s gone.”

“I eat a lot of fast food,” he admits, “pretty much every day, sometimes two or three times a day. I’m always going, so I don’t really have time to eat right.”

“But despite that, my health began to improve soon after I started MPR,” he says. “I wasn’t even finished with the first bottle before I started feeling better!”

“I take five capsules a day (one serving). That’s less than most people need, but I think it’s because I’m young and don’t have as many health problems as older people do.”

“Before I got sick, I’d always been really healthy,” he adds. “I never had any health problems before that, except for the acid reflux, which started in my teens. If I’d bend over, I’d either throw up a little bit or cough for 10 minutes or so because it would burn so bad in my throat.”

“But other than the acid reflux, I’d always been really healthy. Then all of a sudden I got sick, and it lasted for at least two years.”

CASEY IS FEELING MUCH BETTER NOW!

“Anyway, now here it is seven months later, and I’m feeling much better,” Casey says. “I’m back up to my normal weight, and MPR has given me energy again!”

“Now I can work eight hours or more and still have energy when I get home, to spruce up around the house or do yard work,” he adds. “That’s how I was before I got sick, too, but while I was sick I could hardly do anything.”

“And, when I went to my doctor after using MPR for three months, he told me my blood results were the best he’d ever seen. The only thing that was low was my vitamin D!”

“A lot of people have commented on how much better I’m looking these days,” he says, “and asking what I’ve been doing. I’ve talked to quite a few people about MPR and told them what great results I’ve had.”

“I told Les that as long as they’re making it, I’m taking it,” Casey concludes. “I never want to be without my MPR!”