“Mom and I are feeling warm and energetic again!” 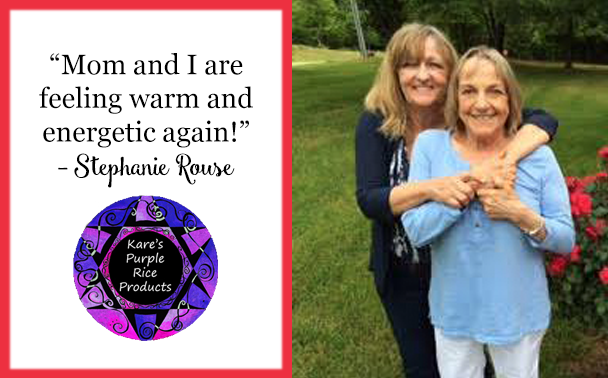 After dealing with an autoimmune disease for over 20 years, Stephanie Rouse, 60, of North Carolina is feeling so much better, with help from Kare’s Micronized Purple Rice (MPR) powder.

The energetic retired mortgage banker is now better able to play with her 4-year-old grand niece and cheer for her husband at his band gigs, she says.

And her 81-year-old mother, Barbara Moquin, is feeling so much better these days that she’s cleaning out her closets instead of sitting in her recliner under a blanket!

“When I was first diagnosed with a rare autoimmune disease at age 42,” Stephanie says, “I found out my body was attacking its own red blood cells, and it made me anemic. My hands were so cold they’d go numb, and my nose would turn black.”

“I always felt so cold, and so tired. When I’d get cold, my face and especially my nose would become so discolored that I couldn’t even go to the grocery store without covering up.”

“I’ve had this for almost 20 years,” she adds, “but I’ve lived with it. I’d keep hand warmers with me, blankets, socks, extra coats — I learned to be prepared. But I don’t need to worry about that now!

“I discovered MPR while doing some research for a friend,” Stephanie relates. “He’d contacted me because he knew I was into alternative health. He had peripheral nerve damage from medication and wanted to see what I could find to help him.”

“In my research, I found MPR,” Stephanie says, “so I dug a little deeper and realized it’s food  for your cells. I had a little aha moment as it dawned on me that this might help me as well!”

Stephanie learned how this powerful food can fuel the body, giving it more energy to repair and regenerate, and that it takes 60 pounds of rare, heirloom purple rice from Thailand to make just one pound of powerful MPR powder.

The most nutritious part of the purple rice grains is extracted and milled to the size of a micron. The smaller the nutrients, the easier it is for them to be absorbed through the cell membrane and fuel the mitochondria (cellular batteries), which then produce ATP, or pure light energy.

HER FRIEND’S MPR WAS GIVEN THROUGH A FEEDING TUBE

“My friend needed to have his MPR administered through a feeding tube at first,” Stephanie relates, “because he couldn’t swallow. That’s one of the reasons I was interested in MPR, because it is a concentrated food powder that can be mixed up and put in a feeding tube.”

“He told me when he started using it his feet began feeling better and better,” she adds. “And he said administering it through the feeding tube worked well, but he felt it got into his system faster once he could swallow again. He’d been on a feeding tube for two years, and is now able to eat normally again.”

“My body temperature heating up was one of the first things I noticed since I began eating MPR,” Stephanie relates.

“Before, my body would get cold from sweating, and when my temperature went down I’d turn deep purple,” she says. “But at my 60th birthday party, I danced the whole night long and didn’t turn purple. I’d only been eating MPR for a month at that point!”

“Also, for more than 20 years, whenever I’d get my blood tested they’d have to heat the tubes because my blood would clot so fast due to my disorder. The tests would say invalid.”

“But when I had my blood tested a month ago, everything was normal, and they didn’t even have to heat the tubes!”

OTHER THINGS IMPROVING FOR HER, TOO

“The numbness and weakness in my hands have gone away, too,” Stephanie adds. “Before, I couldn’t even hold a large drink without using both hands.”

“Other things are improving, too,” she adds. “It’s like I tell my husband — you don’t even realize things are changing, but then all of a sudden you notice you don’t have that problem anymore!”

“Some of the things I’ve noticed are that my skin is getting softer, and I feel more rested when I get up. And for 30 years I had trouble with constipation, but now I have normal bowel movements!”

HER MOTHER’S DOING GREAT ON MPR!

“My mom is using MPR too,” Stephanie relates. “She’s 81 now and is doing so much better!”

“I gave her my first free bottle to get her started because she had no energy. She was sitting around in her recliner all the time with her blanket on. She was cold all the time, and she had a rash breaking out on her legs. She’d always been very active before.”

“Mom started on MPR about a month after I did,” Stephanie recalls. “She’s feeling better and better.. I called her one day and she said she was freshening up all the coats in the closet — she was cleaning the house and looking for things to do!”

EVEN HER 13-YEAR-OLD SHELTIE DOG IS THRIVING

“Charley, my 13-year-old Sheltie, is on it too,” Stephanie relates. “He has joint stiffness in his hips, but it’s gotten a lot looser since I started giving him MPR.”

“He’s moving around a lot better,” she adds. “When he was younger, he’d always go over to his basket and get a toy. He hadn’t done it for two years or so, but now he’s back to playing with his toys!

“And my mom and my dog are feeling so much better, too. I’ve become a real proponent of MPR — I plan to continue using this amazing product for the rest of my life!”