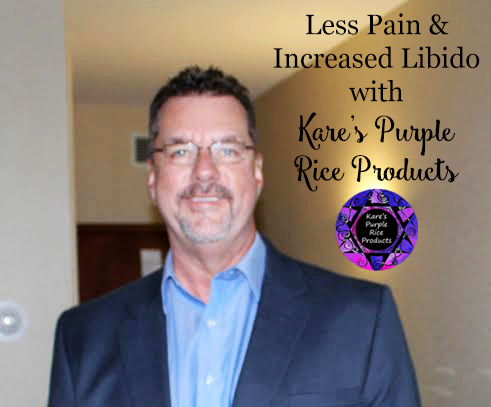 Prescription painkillers had dampened Rick’s libido for months, but Kare’s Micronized Purple Rice turned that around quickly, and today he is raring to go!

“If this keeps up, my wife will have to put a padlock on the bedroom door!” laughs Virginia contractor Rick Hugill, 60.

“You can’t be a cuddly bear when you’re in constant pain,” Rick says. “I had become a cranky, grumpy old man who was miserable to be around.”

His wife Peggy agrees. “This is ridiculous,” she had told him. “We have to find some way to manage this pain.”

Rick had been suffering pain for about five years, he says. “My back had spondyloslisthesis, which is when a vertebra slips out and puts pressure on the spinal cord, causing awful sciatica pains.”

He also had terrible foot pain. “The doctors thought it was diabetic nerve pain (neuropathy), so they tried several medications—but they were no help.”

Rick went to several podiatrists, and eventually tried heavy-duty anti-inflammatory steroids. “They helped a little,” he says, “but after a couple days the pain would come right back.”

He and Peggy had entered the contracting business 10 years earlier, after being downsized from their corporate management jobs.

Today Peggy runs the back office, while Rick works in the field and manages their employees. Because of the physically demanding work, he developed knee and shoulder pain as well.

“To do a standard tub refinishing job, I make about 8 to 10 trips in and out of the house, up and down steps, carrying heavy equipment. And I’m on my knees and elbows while I’m working on the tub. It’s really a lot of wear and tear on my body.”

Rick had tried everything his doctors recommended, to no avail. So Peggy started researching natural pain management solutions.

That was when she found Kare’s Micronized Purple Rice. She learned how it is milled so fine that its powerful nutrients are able to be absorbed through the cell membrane, fuel the mitochondria (the cellular battery), and regenerate the cells. Rick started taking it in September, and Peggy started soon after.

“After about seven or eight days, my foot pain stopped,” Rick says, “and soon every pain in my body went away.”

Rick no longer needs the anti-inflammatories or prescription pain meds he used to take. “For the first time in 5 to 10 years, I am 100% pain free, all over,” he says.

“It’s been a huge change,” Rick agrees. “I’m much calmer, and I feel more focused. I don’t feel clouded by the narcotic painkillers I was on—it’s changed my personality and made me a happier person again.”

He saw a significant change in his urinary tract problems as well. “I tested it recently—I drank three big 20-ounce glasses of water right before bed, and I only had to get up once! Usually I’m up 8 to 10 times a night.”

“I had been thinking I must have a prostate problem, but I had a PSA test and everything came back normal. So it wasn’t my prostate, but whatever it was, it’s gotten 100 percent better.”

He is starting to see other changes, too. His beard has less dandruff and seems to be getting a bit darker, his eyesight is improving, his energy is up, and he’s sleeping better.

Rick wants to let other men know about the Micronized Purple Rice. “It’s helped me so much,” he says. “I kept thinking, the men are missing out here! So I just want to tell all the women Purple Rice Eaters to let their husbands and boyfriends know about this amazing health product!”

For more information about the Micronized Purple Rice, click: www.karespurplericeproducts.com/purple-rice