“KPR was an answered prayer for Eleyna and her 24 Yr old Dog!” 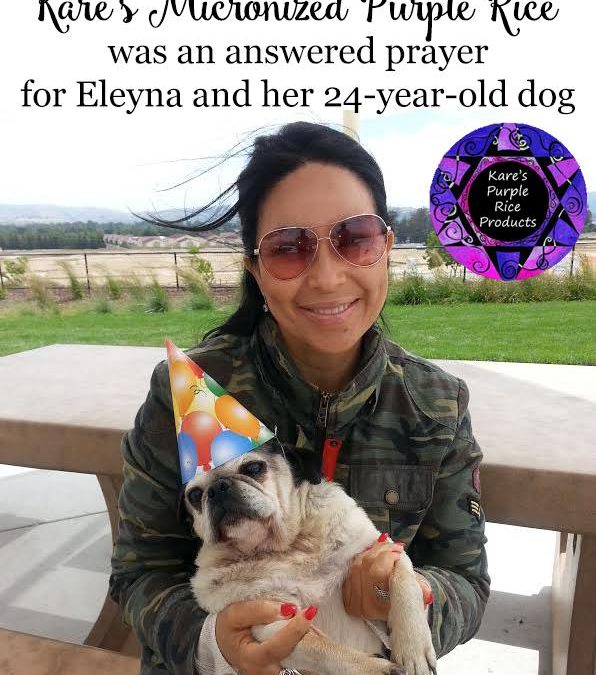 Kare’s Micronized Purple Rice has been a godsend for California animal lover Eleyna Felix and her record-setting pug, Julio. At 24 years old, Julio is one of the oldest dogs in the world!

“Kare had told me you can feed the Micronized Purple Rice (MPR) to pets,” she remembers. “My sweet dog wasn’t able to walk at that point because of severe arthritis in his legs and back. I had to carry him to the potty, and I couldn’t take him on his walks anymore.”

“My vet said to measure him for walking wheels,” she says, “but something told me to hold off. We started on the Purple Rice shortly after that. I put him on a quarter teaspoon, twice a day.”

“I know it sounds unbelievable,” Eleyna says, “but Julio got up maybe an hour and a half later, and started walking! I didn’t personally see it because I was taking a shower, but my boyfriend John called out to me and said, ‘Eleyna! You have to come see this!’

At first I panicked; I thought maybe something had happened to him. I came out and said, ‘Oh. My. God.’ Julio was walking! We just looked at each other, and I started crying, because he’s my baby.”

“I took him out to the courtyard, and he started following me,” Eleyna says. “And he even started galloping! I called Kare and said, ‘He’s walking now!’ She was so happy for us. I was in tears — of joy! My sweet Julio has been walking ever since then.”

“I also have a Chihuahua, Izabela, who is 8 years old,” Eleyna says. “I give her a quarter teaspoon once a day. Julio gets that amount twice a day because of his advanced age. I have two cats, too: April, 9, a female, and Skye, 11, a male. They are not on the MPR yet, but will be soon.”

Eleyna had first found out about the rice after praying for help, she says. She had been experiencing terrible menopause symptoms and other health issues, and she felt she couldn’t take it anymore.

“About three years ago I started menopause,” she says. “That turned my whole world upside down. I was depressed, fatigued, and had severe hot flashes, irritability, insomnia, and night sweats. I was at the point where my depression was so bad I was actually suicidal. I was in such a dark place.”

“I was having an intense hot flash about every 40 minutes, and each one lasted about a minute.”

“The worst part, though, was that I would get terrible anxiety with each one. I would know one was coming because I’d feel like my heart was going to beat out of my chest.”

“Often I was not able to drive because of the anxiety,” she says. “I was shaky all the time, and if I saw a bridge I’d be so anxious I’d almost have to pull over to the shoulder of the freeway. I live in the San Francisco Bay Area, and we have a lot of bridges here, so that was not good.”

“Poor John was in panic mode all the time because he didn’t know how to handle it,” Eleyna says. “I was not myself — crying all the time, and overly sensitive about everything. I became like this Jekyll and Hyde person, you know?”

Eleyna had been suffering from a number of other health problems, too, she relates.

“I’ve been dealing with many issues throughout my life. Nothing very chronic, but still very painful health issues, from Raynaud’s disease to vertigo to bad sinuses, restless leg syndrome, joint pain, thyroid issues, spider veins, degeneration in the C3 disc in my neck, acid reflux, low stomach acid, seasonal affective disorder (SAD), back and knee pain. I made a list when I first started on the rice, so I could keep tabs on my improvements.”

“I was in a lot of pain from the disc degeneration in my neck,” she says. “I asked the doctors if they could just do surgery to fix it, but they said it was too risky.”

Eleyna started studying holistic medicine a while back, she says, looking for answers.

“I researched a lot, and did everything the holistic doctors recommended, but nothing helped. So I kind of gave up at that point.”

One day everything changed.

“I’m a Christian,” Eleyna says, “and one day I was on my knees in my bedroom. I cried and asked the Lord to help me. I said, ‘I need some serious healing. I can’t do this alone.’”

“Right after that I went to my computer,” she says. “I went to my Facebook page, and right then, Kare was on! I tell this to everybody — God answers prayers. Seriously. I saw Kare’s article and read about her Micronized Purple Rice.”

After doing her research, Eleyna learned it takes 60 pounds of heirloom purple rice from Thailand to make one pound of this powerful food.

The most nutritious part of the Purple Rice is milled so fine that its concentrated nutrients can be absorbed through the cell membrane, where they can fuel the mitochondria (cellular batteries) which then produce ATP, or pure light energy. The cells are then recharged, repaired and regenerated.

“Since I’m into natural solutions, I was really excited,” Eleyna says.

“I followed Kare for three or four days, and then I told John, ‘I’m just going to order it — I have nothing to lose at this point.’ I had tried everything else, and nothing worked. I spoke to Kare and two of her health coaches, Helen and Bonnie, and they told me about other people’s successes with menopause and thyroid. I was really excited! Something in my heart told me this was going to work because God had answered my prayers so quickly!”

“So I started eating it in May,” Eleyna recalls. “The first thing I experienced was a burst of energy. I noticed it immediately, and I was like, ‘Whoa!’ because I had been so fatigued all the time, so I liked finally having some energy.”

“I continued eating the MPR,” she says, “and I felt subtle changes, like I was able to sleep better. My hot flashes got better, too. After about three weeks, they had lessened quite a bit, and the anxiety was nearly gone.”

“Eating the rice has helped me so much with my menopause symptoms,” Eleyna relates. “It’s been life-changing. Now I only have like maybe one subtle hot flash at night. My anxiety is gone, I sleep really well, and my mood swings are much better. I just feel like I’m normal again! My naturopath said my thyroid is balanced now, so I’m sure that has helped a lot with my symptoms.”

“And my doctor told me she’s been practicing medicine for 40 years but has never seen cholesterol readings as good as mine!” Eleyna exclaims. “She joked that I was going to live to 300!”

“My skin is really soft now, too,” she says, “and my hair — I’m Latina, a mix of Brazilian, Lebanese, French, Mexican, and Spanish, so I have very thick hair already, but it is even thicker now. I don’t have to touch up the gray as often, either. Also I think my eyesight is improving! My contacts seem a bit too strong now.”

“Since I’ve had such good results, I started sharing the MPR with everyone. I had asked the Lord to bring me that healing, and I felt that now he’s saying, ‘I want you to help others to heal.’ So that’s become my mission.”

For more information about the Micronized Purple Rice and to get a FREE copy of Kare’s E-Book, click:www.karespurplericeproducts.com