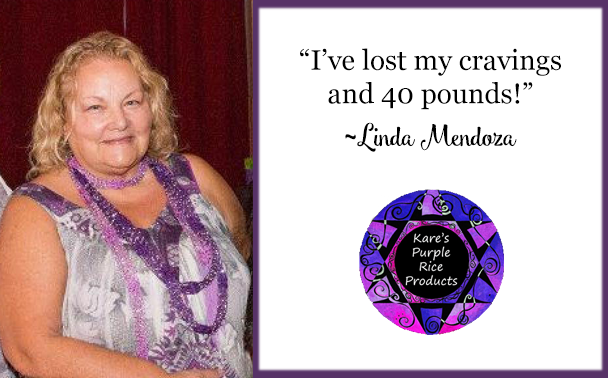 “Before I got started on MPR,” Linda says, “I was so lethargic that all I wanted to do was lie around. My husband would take me on a trip, and I’d just sit in the car. But these days I’m going to the gym just about every day, which for me is a real accomplishment!”

“I found I had more energy with MPR,” she relates. “It took a while before I felt that increase, though — pretty close to three months. I had a gym membership, but I wasn’t going. But as I began to feel better, I started wanting to work out again.”

“At first I was going every other day,” Linda says, “and then every day for quite a while. I lost a good 40 pounds. I still have quite a bit more to lose, but I’m well on my way.”

“At the gym I do cardio, and I’m trying to do more resistance training,” she says. “I’m incorporating weights now, because I found that once I lost weight I was flabby, so I’m working on tightening up.”

“With all my extra energy, I’ve also been happily cleaning and reorganizing, which is really great,” Linda relates. “Before, my home was getting pretty out of hand, with stuff piling up everywhere.”

STARTS ON MPR IN JANUARY

“I started on MPR in January, after seeing one of Kare’s Facebook ads,” Linda says. “I was intrigued, because I wanted to be as healthy as possible, and I wanted to get my weight down.”

“When I saw the ad, I thought, I really need to focus on this and see what it’s all about,” she adds. “I was super interested, because I was talking to lots of people in my mother’s retirement community about health.”

Linda learned how this powerful food can fuel the body, giving it more energy to repair and regenerate, and that it takes 60 pounds of rare, heirloom purple rice from Thailand to make just one pound of powerful MPR powder.

“One of the first things I noticed,” Linda says, “was that it helped with cravings. I’m kind of a junk food junkie, and I love my cookies and candy. My weight has always been up and down, ever since I was a child. Well, I stopped craving junk food! That made a huge difference.”

“My mother is 87 and in great shape,” Linda says, “and I’m very interested in staying healthy so I can keep up with her. She only quit Waterski Speed Racing last year! We both want to be as healthy as we can, for as long as we can.”

“I was living with her for about four months,” Linda says, “and we talked a lot about health with the other ladies down there where she lives. It’s a golf community, with lots of retired people. They have a workout room, and my mother and I would go and work out and do lap swimming.”

“These days I’ll call my mother and ask her, ‘Are you eating your purple rice, Mom?’ and she’ll say, ‘Oh, yes, very faithfully!’ ”

“Now she’s back to line dancing,” Linda relates. “Her friends have been asking her, ‘Alice, what’s your secret? Your skin looks so healthy!’ She tells them, ‘My daughter and I are using Micronized Purple Rice powder!’ ”

“Not only that,” Linda adds, “but she is driving again! She proudly told me, ‘I drove to Costco alone to pick up more veggies!’ ”

“She had also been having a problem with her hair falling out. All of my aunts have really thin hair, and so do I, but it’s not as bad as theirs. Well, hers was thinning, but now she’s seeing growth spurts, especially in the front.”

HAS HER CHIHUAHUA ON IT, TOO!

“My five-year-old chihuahua, Coco, is on MPR too,” Linda says. “He was really overweight before — 22 pounds, although he’s only supposed to weigh 12. Now he’s back down to a healthy 14 pounds. He plays with his toys and has more energy now. He goes running and jumping, with his ears flying, when he hears his dad come home!”