“My insides are getting younger!” 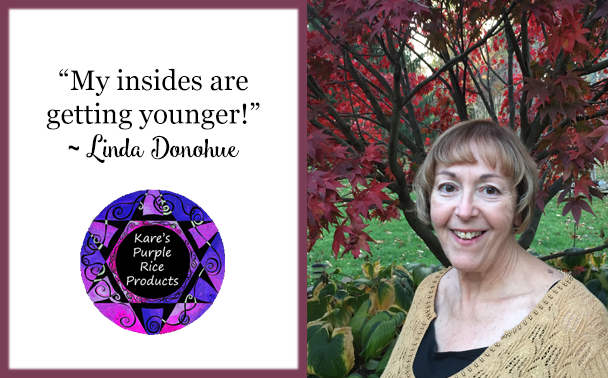 After 41 years in nursing, Linda Donohue, 63, of Pennsylvania was suffering from sleep trouble and other health issues. But now, thanks to Kare’s Micronized Purple Rice (MPR) powder, she outworks nurses half her age — and they call her the Energizer Bunny!

Linda has been using MPR for just over a year now and has noticed big improvements in not only her sleep, but also her vision, blood lipids and sugar, nerve pain, bowel movements, and joint pain, she relates.

“I’ve always worked full-time,” she says, “and after my five kids were grown, I indulged myself with work. For eight months out of the last year, for instance, I was working 60 or 70 hours a week.”

“It was interesting that during those eight months, even though I was working like crazy, I didn’t gain weight,” she says, “whereas the last time I did that, before MPR, I gained 50 pounds. I was never sick a single day this time, either.”

“The other nurses I work with are in their thirties,” she adds, “yet I was working twice as many hours and seeing twice as many patients as nurses half my age. They started calling me the Energizer Bunny!”

LINDA STARTED ON MPR 13 MONTHS AGO

“I started reading about it two or three months before I ordered, as I was a bit skeptical in the beginning,” she says.

“But I read lots of testimonials, especially about people experiencing good results with some of the things I was having problems with, and finally I decided to try it.”

“I’ve never cared for pharmaceutical drugs,” she adds. “I prefer something more natural to help the body heal.”

Linda learned how this powerful food can fuel the body, giving it more energy to repair and regenerate, and that it takes 60 pounds of rare, heirloom purple rice from Thailand to make just one pound of powerful MPR powder.

“I wanted to give MPR a fair trial,” Linda says, “because I know natural products take longer to work than drugs — but they don’t have the side effects that drugs do. So I decided to give it three months. After that, I decided to keep going because I was seeing great results!”

“I had been using sleep medication at night,” Linda remembers, “but I was always tired during the day due to lack of sleep.”

“Well, better sleep was the first thing I noticed after starting MPR,” she says. “I started sleeping better within my first week. I stopped using the sleep aid after just a few days, and by the end of my first month, I wasn’t taking naps in the afternoon anymore because I wasn’t tired in the middle of the day.”

“My joint pain was the other thing that improved relatively quickly,” she recalls. “I was getting injections for knee pain, and taking painkillers and rubbing creams on my knees twice a day. Now I don’t take the painkillers anymore, and I only use the creams occasionally.”

HER VISION IS IMPROVING, TOO!

“My vision was getting worse before I found MPR,” Linda recalls, “so that was one of the important things on my list that I was hoping would improve. I had cloudy spots on my eyes, and the doctor had said I was probably going to need surgery on them.”

“Well, when I went to my eye doctor after a year on MPR,” she says, “he told me my glasses prescription wasn’t good anymore because my vision was improving. And the cloudy spots had started to shrink — I would no longer need surgery!”

HER OTHER HEALTH ISSUES ARE RESOLVING AS WELL

“I had nerve pain from my blood sugar problems,” Linda says, “and that has improved substantially, along with my average blood sugar test results.”

“Also, I was having chronic problems with my bowel movements and was having to use a natural laxative every day to go to the bathroom. I don’t need to do that anymore!”

“When I got my blood results after a year, and had my eye doctor appointment, I realized my improvements had to have been from the MPR. I wasn’t doing anything different.”

“The doctor said all my numbers were better,” Linda explains. “I had been exercising like crazy and eating omega-3s before, but I couldn’t get my numbers to budge. But after being on MPR, everything was dramatically improved, so I was thrilled with that!”

“People I haven’t seen for six months or a year are asking me what I’m doing,” Linda says, “because they’re saying I look much younger!”

“I was at a family wedding recently,” she relates, “and people were asking me all about it. I’m not one for pushing things, but now I have proof that I’ve been doing something and something internal has really changed.”

“My insides are getting younger,” the hard-working nurse concludes, “and I would never want to be without my MPR!”