“Improvements in Arthritis, Bursitis, and Candida” 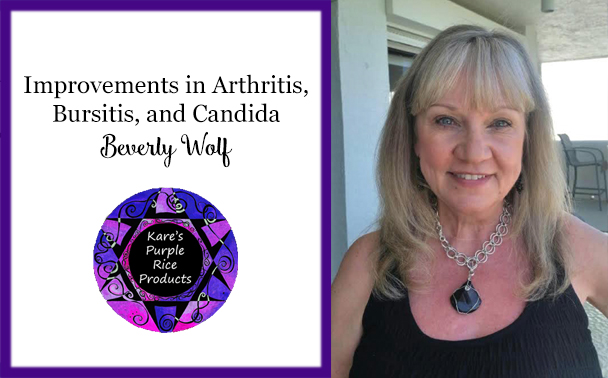 Better energy and improvements in her arthritis, bursitis, and candida were just the tip of the iceberg for Beverly Wolf, 63, of Connecticut, thanks to Kare’s Micronized Purple Rice (MPR)!

“Around Christmastime I went to a church fair,” she says, “where I ran into a friend I hadn’t seen in a few years. She told me how much younger and healthier I look. She thought I’d had a facelift!”

Beverly relates how, as a young woman, she got started on the path to natural alternatives.

“After having cancer at age 24,” she says, “I realized there had to be a better way to get well than taking chemicals and drugs. That realization started my long journey to better health and wellness.”

“When I came across Kare’s ad on Facebook,” she says, “it really resonated with me. It took me about four months of investigating MPR before I tried it. I firmly believe, as Kare does, that if you give the body what it really needs, it will heal itself!”

Beverly learned how this powerful food facilitates healing in the body, and that it takes 60 pounds of heirloom purple rice from Thailand to make just one pound of MPR.

“I started my MPR journey in May of 2015,” Beverly says. “My main focus was more energy, feeling better, and anti-aging.”

“After eating MPR for just one week,” she says, “my brain fog started lifting! I felt a real shift in energy, less fatigue. And a calmness had come over me. It’s hard to explain, but I felt like I could take on the world!”

“My memory seemed to be improving, too, and I was sleeping more deeply.”

Then, after two weeks, she relates, “I noticed that my skin was getting soft and smooth, and soon people were telling me I was glowing! A big skin tag fell off after a shower, too.”

“Also,” she laughs, “my feet felt like a baby’s heinie! My callused, rough, dry feet became velvety soft — it was just amazing!”

“My appetite was decreasing as well,” she adds, “and sugar cravings were lessening. The more healthfully I ate, the more I actually seemed to crave healthful foods.”

Beverly reports that her digestion was improving, too.

“One night I ate some ice cream, which normally would have affected me badly. Well, my stomach was just fine — no ill effects whatsoever!”

“After six weeks,” Beverly says, “my energy kept improving, and focusing became easier. The arthritis in my wrist and knee was getting better, and not feeling as achy.”

“Then, after six months,” she says, “I noticed my nails were stronger, not chipping as much. My hair was getting thicker, too, and I had all these little wisps of new growth underneath! My hairdresser even commented on it!”

Her bloodwork was improving, too, Beverly adds.

“My platelet count went down 64 points from the year before. That was actually good, because the platelet count shows how thick or thin your blood is, and I guess mine had been on the thicker side.”

“And then, after nine months, my hip bursitis finally got better!” she says. “That seemed to take the longest. I walk two to three miles a day with my daughter, and it used to really bother me. Going up and downstairs used to hurt a lot, too, but not anymore.”

Beverly’s arthritis has greatly improved as well, she says.

“I’m writing a book,” she explains, “and I find that I’m now able to write longer with my right hand. I had a touch of arthritis in my right wrist, and before MPR I could write for only about two minutes before I had to put down the pen. Now, a good half hour is nothing!”

Beverly reports that she experienced candida overgrowth after her cancer chemotherapy as a young woman, and she recently had a recurrence.

“My stomach felt bloated and hard, and it ached badly. My candida had gotten bad again, so I upped my MPR from two teaspoons daily to three. What a difference! It took a month or more to improve my intestines, but I feel lighter and better now. I believe the MPR helped to get rid of my candida. I take probiotics, too, so that probably helped as well.”

FAMILY AND PETS IMPROVING, TOO!

“My sister had fatty liver and gallstones,” she says, “and they are gone now, and she has normal blood results!”

“Also, my 29-year-old daughter has a rare type of pituitary tumor that was discovered when she was 15. The doctors operated, because she was getting intense migraines and they were afraid she could lose her eyesight. She had the brain surgery, and all went well, but now she has diabetes insipidus, which is caused by a hormonal abnormality because part of her pituitary was removed.”

“Her pituitary tumor has been stable all the time she’s been eating MPR. She just had an MRI recently, and it showed that the tumor hadn’t grown, so everything was good. I’m not 100 percent sure that’s because of MPR, but I believe it has helped.”

Beverly says her family’s pets are improving, too, thanks to MPR!

“My nine-year-old cat, Baggie, eats MPR too,” she says. “His biggest improvement is his energy level. Also, two years ago we almost lost him to kidney stones, but so far, so good. Also, he has a fatty cyst on his neck, and it has gone down to half the size it was!”

“My daughter’s dog Ollie is on it as well,” she adds. “He’ll be three in June. He’s a shelter dog, so he has a lot of anxiety, and we’ve tried to help him with that. I think the emotional baggage is really hard for him, but I firmly believe MPR helps him on an emotional level, because it affects the brain and the mind.”

HELPING OTHERS GET WELL

“I so look forward to the future,” Beverly says, “and am excited to see what else improves with this miraculous superfood!”

“I thank God for finding Kare on Facebook,” she adds, “and following through with my intuitive hunch to contact her. Thank you, Kare!”

“All my life, I’ve enjoyed helping others,” Beverly concludes. “I want to help people anti-age, improve their health conditions, and become their beautiful selves. I try to do this by listening to what people tell me and by sharing what I know, what I’ve been feeling on MPR.”