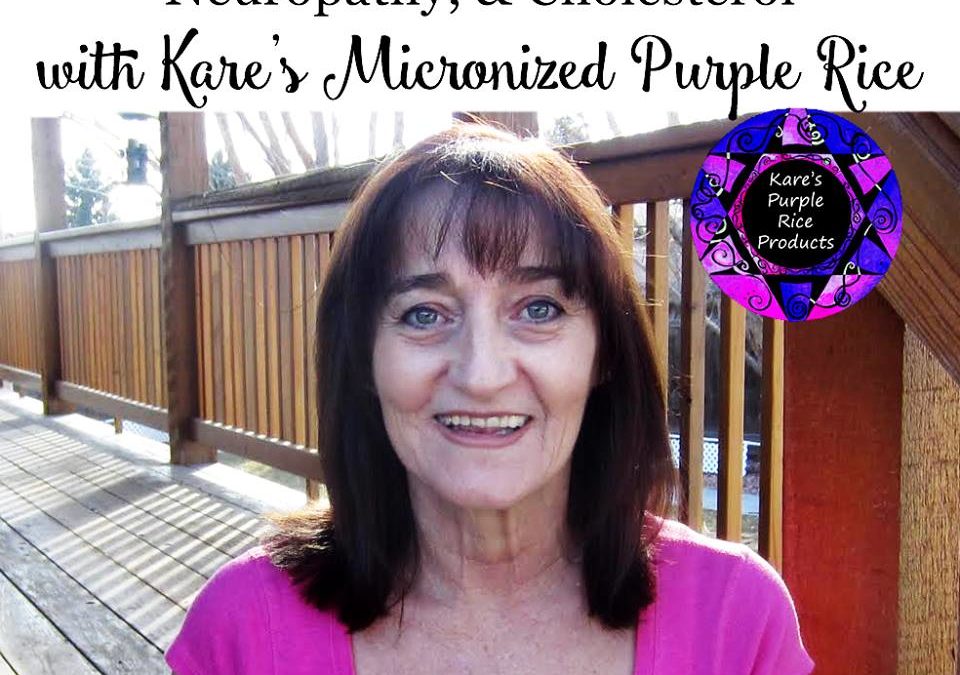 Janelle Lajaunie Vance, 55, has lowered her cholesterol naturally with Kare’s Micronized Purple Rice (MPR) — and she and her family have experienced lots of other benefits as well!

“My cholesterol was getting higher every year,” Janelle relates. “I didn’t want to keep taking drugs for the rest of my life, so I started looking for a natural solution.”

“My school buddy from Louisiana, where I grew up, told me about MPR back in December,” she says. “Hearing about the great results she and her family and friends were having with MPR, I decided to give it a try!”

Janelle learned that it takes 60 pounds of heirloom purple rice from Thailand to make just one pound of this powerful food.

After starting MPR on Dec. 28, Janelle reports, she had bloodwork done in early February. She was happy to learn that her LDL cholesterol had dropped from 150 to 113 — a big drop after having eaten MPR for just over a month!

“My blood pressure went down, too,” she adds, “and my doctor said I’ll be able to get off my BP meds soon.”

DRY CLIMATE HARD ON HER SKIN

Janelle and her husband Jay live in Colorado. They’d dated in Louisiana, she says, and then married after he got a job in Colorado a few years ago.

“Living out here in Colorado, the air is very dry, so my neck looked like that of a 90-year-old woman,” Janelle says.

“Well, a couple weeks after I started eating MPR, I noticed I didn’t have those big crevices in my neck anymore, and my skin didn’t have that crepey look. I’ve always used a facial moisturizer on my neck, and I haven’t changed that. The only difference was the MPR.”

Janelle sent pictures of her neck to her sisters, she relates, “and they said, ‘Oh, I gotta have some of that!’ That improvement in my neck was the first big thing I noticed.”

“My sister in Nebraska has asked me for more of Kare’s books, because she says, ‘Everybody wants to read about this!’ She’s already given them all out and is asking for more!”

“Not long after I noticed the improvements in my neck,” she says, “I was using my magnifying mirror to put my eyeliner on. I noticed that when I’d look in the mirror it was blurry. I thought, ‘Oh, my goodness! My eyes are getting worse!’ But then I tried looking at a regular non-magnified mirror, and I was surprised to discover that I could see clearly. My vision had improved!”

After that, Janelle says, she started to see lots of other improvements.

“My heels had been very cracked and dry, with calluses. I’m not a girly girl —I don’t do the lotion on my feet and such. But these days my heels feel like the inside of my elbows. The difference in my feet is dramatic!”

Janelle relates that her nails and hair started growing faster, too.

“I wear bangs, and I have to cut them like five times a month now,” she says. “I trim them myself because I can’t always get to the hairdresser. My hair’s so shiny now, too — and I don’t even put products in it!”

“My sleep has also improved,” Janelle says. “I was a bad insomniac before — I’d wake up four or five times a night. Now it’s down to once or twice, but I go right back to sleep after waking up.”

“My aches and pains in my hip and legs have improved as well,” she adds.

“I have COPD,” Janelle relates, “which makes it hard to exercise, but I’ve noticed the MPR is helping my breathing. When I go up and down the stairs, I’m not as winded as I used to be.”

“He has severe neuropathy, and it got so bad the doctors had him on three different drugs for it, but even that wasn’t doing a lot. Well, just a couple weeks after starting on MPR, he no longer needed one of the drugs. He hardly has pain anymore, so he’s going to talk to his doctor about discontinuing the other two as well.”

“Every time I’m on the phone with somebody about MPR,” Janelle adds, “Jay’s there saying, ‘Tell them about my feet! Tell them about my varicose veins going away.’ He’s normally very skeptical, so for him to do that is like a miracle in itself! I mean, he wouldn’t even take a probiotic — that shows how much he doesn’t believe in that stuff.”

“Jay has varicose veins on one of his legs, and they’ve gotten very faint since he started eating MPR,” Janelle says.

“He’s also pre-diabetic,” she adds, “and has been on medicine for that for years. I’m really looking forward to seeing his bloodwork soon to see the improvements!”

“Our two dogs eat the Micronized Purple Rice as well,” Janelle says. “Jayce is a rat terrier, and Jhella is a lab mix.”

“Jay and I were laughing a few days ago,” she says, “and he told me, ‘You need to quit giving that purple rice to those dogs!’ I said, ‘Why?’ and he said, ‘Because they’re crazy! All they want to do is play all the time!”

“With all these improvements we’re seeing,” Janelle concludes, “I can’t wait to see what the future will bring!”