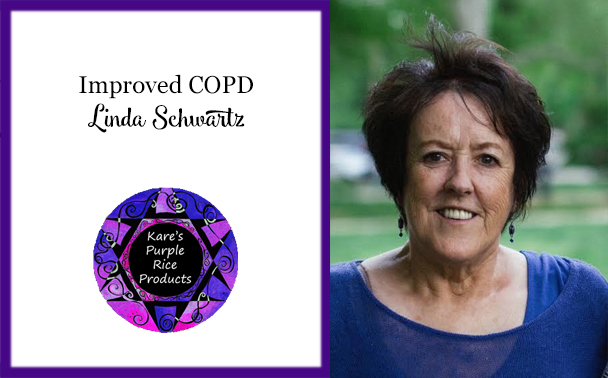 Linda Schwartz, 70, of Pennsylvania has suffered from lung problems for most of her life, but thanks to Kare’s Micronized Purple Rice (MPR), she’s seen a lot of improvement.

“It all started when I was just two years old,” Linda recalls.

Growing up in England after the war, she says, she was surrounded by smokers, “and my mother was probably smoking even while I was in the womb. They didn’t connect any of that to my lung problems, though.”

“Because of my lung condition, I was in hospital with pneumonia every year. My parents never took me to a specialist because they were told by a general practitioner that I had asthma.”

“After the doctors kept me in hospital for six months and observed what was going on, they diagnosed it as bronchiectasis. It’s still called that, but today they’ve grouped a number of lung conditions under one umbrella called COPD, or chronic obstructive pulmonary disease.”

“Basically, I had hardening of the lungs,” Linda explains. “One doctor said it was caused by RSV, a respiratory virus children get. The same virus recurred 5 years ago when I had the flu, and it nearly killed me.”

“I spent pretty much the first 27 years of my life sleeping in a sitting/lounging position,” she says, “so my lungs could drain. The lower parts of my lungs were removed when I was 11 or 12.”

“I grew up in England,” she says, “but I wanted to travel and get away from home, so I came to the U.S. and got a job as a live-in au pair at age 27. Later I married and had a family, and I’ve been here ever since.”

“By the time I was 19 I realized the doctors weren’t making me better or curing me,” she says, “so I took my health into my own hands. My parents were pretty oblivious and thought doctors knew everything.”

“Over the years I’ve seen a number of specialists and tried many alternative therapies. I’ve also eaten a very healthy diet for over 40 years. And I don’t take drugs if I can help it.”

“Today I’m 70 years old,” she says, “and I’ve had this lung condition since I was 2, so there are layers and layers of things to heal.”

“I found out about Kare’s Micronized Purple Rice (MPR) on Facebook,” Linda says, “and read about it in the Kare’s Purple Rice Eaters Facebook group. I’m always looking for natural solutions, so I thought it sounded promising. But I’m pretty skeptical, so I read about it for about 3 months before I finally ordered.”

“Also, I struggle a bit financially,” she adds, “so that’s another reason why I waited quite a while to order. But I’m very glad I went ahead and got started on it, because I’ve found that the money balances out over time since I don’t need as many vitamins and my hair needs coloring less often.”

Linda learned how this powerful food facilitates healing in the body, and that it takes 60 pounds of heirloom purple rice from Thailand to make just one pound of MPR.

“But I had some strange things happen during the first few days,” she adds, “that I attribute to my body getting used to MPR. The first is that during meditation, I had uncontrollable tears without any particular thoughts to provoke them. I figured it was an emotional detox.”

“Then, after two weeks,” she says, “I experienced intensified arthritic pain in my left middle finger and thumb joints, which were red and swollen. This lasted 10 days and I’m sure was another detox level. I don’t medicate unless it keeps me awake, with ibuprofen.”

“After this, the pain and swelling were reduced down to half. Occasionally those joints flare up again, but I have had this for over 30 years and I think it has to go away in layers, like peeling onion skins.”

“The first improvement I noticed was better sleep,” she says. “I used to get up four to five times a night to go to the bathroom, but the first week I ate MPR, I soon slept through the night and only got up once. However, my cough took a while longer to start clearing up.”

“I feel like when I sleep well, more healing is happening,” she says, “so I’m very grateful to MPR for that.”

“Next I noticed my nails were getting stronger, and not flaky. I have to keep them short because I do clay sculpting, but they are hard.”

“Soon my hair stopped falling out,” she says, “which was a side effect from my blood pressure medicine. That was the only drug I was taking when I started on MPR, but recently my doctor reduced it to half of what I took before. I monitor my BP every day, and it’s very steady, at about 122/77 almost every time now.”

“After that, the next thing I noticed was that my eyebrows and eyelashes started to grow back. My eyebrows had been down to the inner third, but now they’re spreading out a bit.”

“I’m experiencing less arthritis and back and hip pain, too,” she says, “and MPR has cleared my sciatica, so that’s been a huge relief!”

“These days I very rarely cough, and I don’t produce a lot of phlegm, but when I do it’s usually because I ate something I might be allergic to, or ate something with sugar or dairy in it.”

“I went to my GP again recently,” she says, “and he lowered my bioidentical hormones, so now I don’t need as much estrogen or progesterone — almost a whole milligram lower.”

Linda has had dramatic improvements in her eyesight, too, she says.

“Before I started eating MPR, I had eye surgery for cataracts in February of last year. That caused my eyes to be very dry and irritated. Well, I started eating MPR in August, and by fall my eyes stopped being dry and my vision seemed to improve. I have not worn glasses since about a month into it!”

CONCENTRATING ON HER ART NOW THAT SHE’S FEELING BETTER!

“I didn’t start doing it until I was 62,” she says, “when I started hand building pottery. I did that until I was 69, and then I started doing sculpture. Out of the blue I realized I could do that! I had always wanted to, but I’d never tried.”

“Most of my work is tabletop size,” she says. “I do a lot of half-nude bodies using found objects, with clay, wood, rusty iron, things like that. I love doing it, and the people I work with. We just went to Lancaster recently to look in old antique barns for stuff to use in sculptures.”

Thanks to Kare’s Micronized Purple Rice, Linda can focus on her art rather than spend all her time in doctor’s offices!

“I just had my 70th birthday party Costa Rica trip,” she concludes, “and nobody believes I am that age. I feel 35. I will not stop taking MPR!”