“I’m smiling now and have more patience with the kids!” 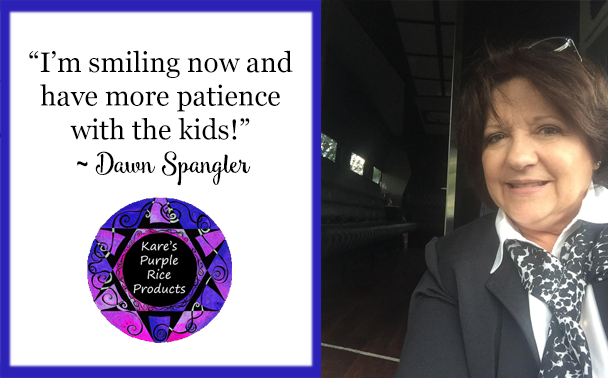 Acid reflux was keeping school bus driver Dawn Spangler, 55, of Ohio awake at night, but with help from Kare’s Micronized Purple Rice (MPR) powder, her stomach issues are a thing of the past.

“Driving a bus can be stressful,” Dawn relates, “but I’ve found that when I’m feeding my cells MPR, I sleep much better, so I have more stamina and am more patient with the kids. I smile more, too!”

“I was married for 33 years,” she adds, “and I have five kids of my own, including twins. After my divorce I became vitamin D deficient, and my blood results were getting worse. I was having hormonal issues, my metabolism was slowing down, my hair was falling out, I was depressed, and my joints ached.”

“I got to the point where I was desperate,” she admits. “I was ready to try anything to help me feel healthier.”

“I found Kare’s site on Facebook,” Dawn recalls, “and followed it for a while before ordering. I read the testimonials and what people were saying about it, and finally I decided to order.”

“When I got my MPR, I made a commitment to do exactly what Kare said, including drinking lots of water,” Dawn says.

She learned how this powerful food can fuel the body, giving it more energy to repair and regenerate, and that it takes 60 pounds of rare, heirloom purple rice from Thailand to make just one pound of powerful MPR powder.

“I like the fact that MPR makes your cells work better so you can get more benefits from the nutrients you take in,” Dawn says. “It helps every cell in your body.”

“You have to be diligent and use it consistently, though,” she says. “I treated it like my life depended on it, and it really helped.”

“The first thing I noticed,” Dawn remembers, “was my acid reflux improving. I had started getting it bad about a year after my divorce, and I didn’t want to take medicine for it — I wanted to heal it naturally. I’d tried antacids, but they didn’t help.”

“I was waking up in the middle of the night with it, and it’s very painful. It burns your throat really bad — I was afraid I would lose my voice from all the burning acid coming up out of my stomach.”

“My stomach was often bloated, too,” she recalls. “I could take two bites of food and be bloated.”

“Well, just one week after starting MPR, my acid reflux was gone,” she says. “Totally gone! That really sold me.”

HER BLOOD RESULTS IMPROVED, TOO

“For my bus driving we do yearly physicals,” Dawn says, “and my doctor had been concerned for years as my readings were getting worse. He had me taking medicine, but it wasn’t helping.”

“Well, I recently had new blood tests, and after eight months on MPR, I’m pleased to report that my results have improved dramatically! I was ecstatic because my numbers weren’t dropping before that, no matter what I did. My doctor was thrilled, too!”

HER SKIN AND HAIR ARE LOOKING BETTER AS WELL

“My skin has more of a glow and isn’t as dry,” Dawn relates. “I’ve also noticed that other people my age seem to have a lot of age spots on their arms, but I don’t have any yet.”

“I went to cosmetology school recently in order to start a new career,” she says, “and we learned a lot about skin. You need to be healthy on the inside to have pretty skin on the outside.”

“Your health is reflected in your hair, too,” she adds. “Thicker, shinier, healthier hair means you’re doing all the right things.”

“I took a picture of my hairline before starting on MPR, and I noticed little hairs popping up everywhere. My hair was getting thicker again.”

“I get a lot of compliments on how young I look,” she adds, “and I credit taking care of myself and eating the right things, including MPR.”

“People think MPR is another gimmick, but it’s the real deal,” she says. “Taking care of your cells helps you feel younger, gives you nicer skin, and helps your hair thicken up again.”

“Now that I’m taking better care of myself,” Dawn concludes, “I’m feeling so much better overall. I’m a customer for life!”