“I’m able to digest my food now…and I can walk again!” 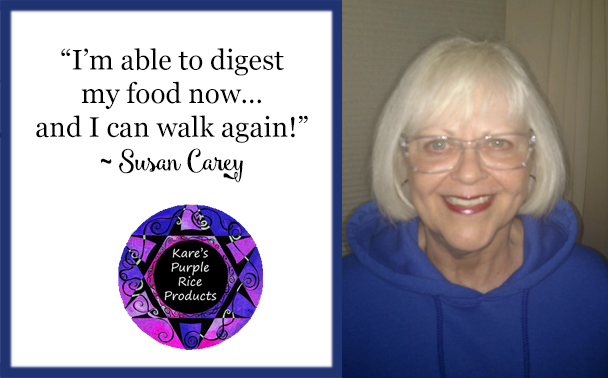 Susan Carey, 66, of Ohio has finally found relief from her lifelong digestive issues, thanks to Kare’s Micronized Purple Rice (MPR) powder. Her injured feet are healing much more quickly, too!

“I’ve had severe digestive issues my entire life,” Susan says. “I couldn’t fully digest my food and absorb the nutrients. I had stomach aches all the time and was always in the bathroom. It was so unpredictable that some days I couldn’t even leave the house.”

“As a result, I was allergic to many foods,” she says. “My hair started to gray prematurely in my 20s, and I had many health problems. So, to finally get those nutrients absorbed at the cellular level has made a huge difference in my health — and in just three months!”

“I’ve spent a lot of money on doctors over the years,” she adds. “They called my condition by a lot of different names, but they never really did much to heal it.”

“My hairdresser, whom I’ve known for many years, was the one who told me about MPR,” Susan recalls. “I’d noticed that her skin was looking much better than the last time I’d seen her a few weeks earlier, and I asked her what she was doing differently.”

“She told me she’d started using Micronized Purple Rice powder, so as soon as I got home I went online and ordered. After I read all the testimonials, I figured I couldn’t go wrong!”

Susan learned how this powerful food can fuel the body, giving it more energy to repair and regenerate, and that it takes 60 pounds of rare, heirloom purple rice from Thailand to make just one pound of powerful MPR powder.

FOOT INJURIES HAD LEFT HER UNABLE TO WALK

“A few months ago I dropped a heavy shower head on my foot and severely injured it,” Susan says. “It swelled up like a pumpkin. Well, I already had two broken toes on my other foot from an earlier injury, so I literally didn’t have a foot to stand on!”

“My doctor said my feet probably would not be completely healed until spring,” she says, “but after starting on MPR they’re healing much faster than expected, and I’m already up and around. The MPR also kept me calmer during the month that I had to sit around and convalesce.”

“Also, I was planning to have elbow surgery, as I had broken my elbow and it wasn’t healing after a year and a half,” she adds. “But now I’ve gone from about 60% range of motion to around 90%, and my pain level has been cut by about two-thirds. My doctor is going to be shocked with that when I send him his Christmas card. No more operations!”

HER SKIN IS IMPROVING DRAMATICALLY DESPITE WEIGHT LOSS

“I was on a weight loss program before starting on MPR,” Susan relates. “Over the past year I’ve lost more than 80 pounds! Usually that kind of weight loss would leave you with a lot of wrinkly, saggy skin, but the MPR is helping to tone and tighten my loose skin and decrease the cellulite.”

“I’ve gone down 10 jeans sizes!” she beams. “I donated my old jeans to a homeless shelter, so I got a blessing both ways.”

“Once I noticed how well my skin was bouncing back, I took a closer look at the rest of my body to see what else was improving. I noticed my legs are shaping up and I could see the muscles again.”

“I haven’t had legs like this for 25 years — and I used to be a bodybuilder,” she relates. “Now I can put my legs up against a 40-year-old’s. I was just telling my husband that I think I’ll be able to wear a bathing suit next summer!”

“I’ve also seen wonderful changes in my face,” she adds. “I don’t even need makeup now. I have lipstick on in this picture, but that’s it! My husband keeps commenting on how I’m glowing now. That’s very special for someone like me who was really, really sick before.”

“I’ve also noticed that my hands look much better. They don’t look like old lady hands! They’re not all wrinkly, and the veins aren’t sticking out.”

SHE’S A TORNADO OF ENERGY NOW, TOO!

“I also noticed that my energy levels, in spite of everything, started picking up right away,” Susan relates. “Within just a few days things started happening. The scope has been so vast in just a short amount of time, and I had been so ill before, that the comeback is dramatic.”

“MPR gives me a lot of energy and helps me be more mindful of what else I’m putting in my body. You don’t feel like messing around eating junk when you’re getting the best!”

HER HAIR LOSS HAS STOPPED, AND HER HAIR IS EVEN GETTING DARKER!

“My hair had been falling out really bad before,” Susan recalls, “but now it’s thickening up again.”

“And, it had been mostly white for decades, but my husband noticed it was coming in darker on the back of my head!” she adds.

“My hairdresser was shocked — she had never seen anything like it — and she’s been doing my hair for many, many years. That really proved to me that it was working.”

SHE’S TELLING OTHERS ABOUT IT, TOO!

“Now I’m like a crazy person — I have to blab about it to everybody!” Susan beams. “I became a distributor because of that. I’m walking proof that it works. Literally!”

“My husband recently started on it, too,” she adds. “He’s normally very skeptical, but after seeing the changes in me, he’s looking to see what it will do for him, too. I’ve turned into a tornado of energy, and he wants some of that for himself.”

“The family members who haven’t seen me since last Christmas won’t know me this Christmas!” Susan concludes.