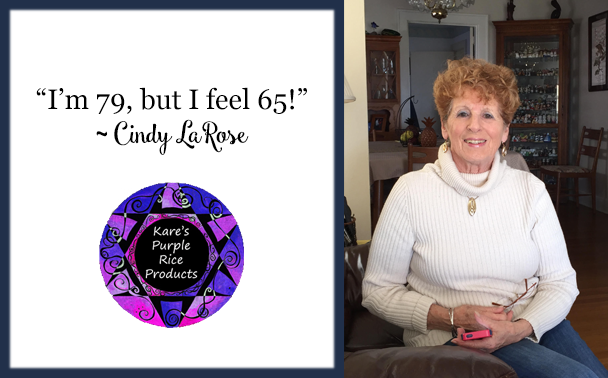 After having two strokes, Cindy LaRose, 79, of Virginia would panic when talking to strangers because her speech was unclear. But with help from Kare’s Micronized Purple Rice powder, she has her confidence back now!

“I was pretty desperate when I called my dear friend in Mississippi, Christine Rodriguez, to ask for her help,” Cindy says.

“Christine is a naturopath, and studied nutrition. I called her because I had had two strokes in three months, which destroyed my secondary memory. It was very embarrassing. I was having trouble conversing — I’d have to stop because I couldn’t get out what I wanted to say. My tongue would twist.”

“Christine spent time on the phone with me and told me all about Micronized Purple Rice powder,” Cindy says.

Cindy learned how this powerful food can fuel the body, giving it more energy to repair and regenerate, and that it takes 60 pounds of rare, heirloom purple rice from Thailand to make just one pound of powerful MPR powder.

“I’d been using another natural product,” Cindy recalls, “but it didn’t seem to be doing much, so I decided to drop it and give MPR a good trial for a few months and see what would happen. I’m so glad I did!”

“Now I don’t panic around strangers anymore, because my speech is so much better. In conversation I find that I can respond without getting too nervous.”

“I got started on Kare’s Micronized Purple Rice powder a few months ago because I was desperate for help with my memory issues,” Cindy recalls.

“After learning about MPR from Christine,” she adds, “I spoke with Kare, and she told me about how it had helped with her husband’s memory issues, so that bolstered my confidence in it, too.”

“I’ve been using MPR at least twice a day,” Cindy says, “and it has helped a lot. It seems to help me feel a lot clearer, where I don’t even worry about my speech anymore.”

“My memory is better now, too. My driving has improved as a result, because I’m better able to remember where streets are and where I’m supposed to be.”

“My memory issues started to improve after about a month,” Cindy recalls. “I was at the mall one time, and I thought to myself, ‘Oh yeah, I remember that street now!’ It was very gratifying.”

HER ENERGY IMPROVED QUICKLY, TOO!

“I was reading about so many people on Facebook who were saying it helps with their energy levels, and I found that to be true for me as well,” Cindy relates.

“I had been having energy problems before I started,” she adds, “but now I can keep going all day! Suddenly I noticed I felt like cooking and cleaning more. My energy level is consistently better now.”

“My agility has improved, too,” she adds. “I’ve been getting outside and walking a mile a day, and I’m trying to work up to two miles a day. Before my strokes, I used to walk four miles a day.”

“I’m very family-oriented and love to travel,” she adds. “I have five children, five grandchildren, and five great-grandchildren, the youngest of whom is 8 years old. We like to go to Florida, Arizona, Connecticut, and other places.”

“I’ve also noticed that when you’re feeling better you tend to have a better sense of humor and a better attitude overall,” she says.

“I had been having pain in my right knee from an injury, but I don’t feel that pain anymore,” Cindy says.

“My son Michael saw how much I’ve improved with MPR, so he recently ordered some, too. He’s in his fifties and goes to the gym a lot, but he recently hurt his knee too, and he’s working on some other health issues as well.”

“Another improvement I’ve seen was in the brown spots on my legs,” Cindy says. “They seem to be getting lighter.”

“I’ve been working with my doctor on cutting back on some of my medications, too,” she relates, “because of the side effects. One was memory loss, which I didn’t need on top of my issues from the strokes.”

“I was starting to see skin damage, too, as another side effect from a medication. I’m so glad I found a natural alternative.”

“I just love sharing natural things like this with people,” Cindy concludes, “because we’re all trying to get healthier! I’m telling everybody about Micronized Purple Rice powder. I’m 79, but I feel like I’m 65, and I couldn’t be happier!”