My husband’s memory and life force are coming back! 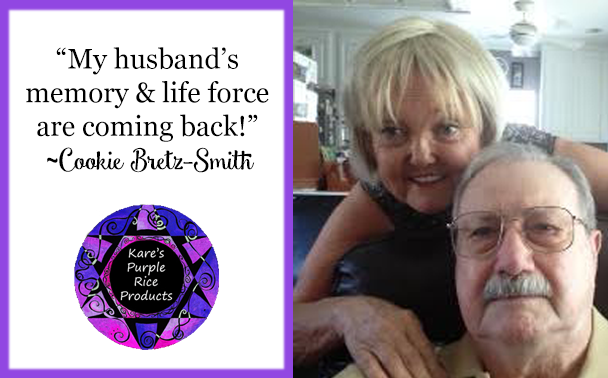 Cookie Bretz-Smith, 69, of California is thrilled to see the changes in her 86-year-old husband, John, thanks to Kare’s Micronized Purple Rice (MPR) powder.

John worked for a large aircraft manufacturer for many years, Cookie says, and he’s been retired for about 20 years now and is experiencing some age-related mental decline.

“They’ve tested him for both dementia and Alzheimers,” she explains, “but really it’s just that he’s 86 and he bought into it.”

“There are certain things,” she says, “like if he tries to cook something in the microwave and it’s supposed to be set for 30 seconds, he might put it on 30 minutes, which would be a disaster. Things like that have happened more than once, so I have to watch him pretty closely.”

“I also administer his meds,” she adds, “and I take care of the household decisions and expenses since he can’t quite put it all together. He’s not at the point yet where he needs full-time care, but he can’t be left alone for very long.”

STARTS ON MPR IN JULY

Cookie relates that she and John got started on MPR powder in July, after learning about it from John’s sister-in-law, Carolyn.

“Carolyn texted me saying I should take a look at Kare’s site,” Cookie explains. “She told me she was out camping with her family, whereas before starting on MPR she could barely step outside and get in the car!”

“Carolyn knew about John’s health problems,” Cookie says, “and she thought MPR could help him. So I started watching Kare’s videos and learning as much as I could about it.”

Cookie learned how this powerful food can fuel the body, giving it more energy to repair and regenerate, and that it takes 60 pounds of rare, heirloom purple rice from Thailand to make just one pound of powerful MPR powder.

“Kare’s site was like an encyclopedia,” Cookie says. “I thought, I’m gonna do it. I’d been feeling lousy for years. I was very fatigued and never got good sleep. Two weeks after starting on MPR, I was able to sleep through the night every night!”

“I love calling in to Kare’s health coach line,” she adds. “They’re all so helpful, and I never need to worry about them trying to upsell me. I talked to Helen first, and she was very positive and helpful. It just made sense to me.”

GETTING EXCITED ABOUT LIFE AGAIN!

“People are noticing that John’s wonderful sense of humor is coming back,” Cookie says, “and he’s been going out to the garage to work on projects instead of watching TV!”

“He used to love to play golf and was very good at it,” she adds. “He hasn’t played for three or four years now, but lately he’s been looking at his golf clubs again, and even doing some putting in the back yard, so we’re going to start going out to the driving range soon. I’m excited about that!”

“I’m such a big fan of this purple rice,” Cookie says. “Everyone’s seen a big change in John over the last couple months. His daughter hadn’t seen him for a while, and she said, ‘Boy, Dad, I don’t know what you’ve been doing, but you look great.’ She noticed his color was coming back, too.”

“My doctor saw my bloodwork and wanted to know what the heck I’d been doing!” Cookie says. “My GFR (kidney function test) had gone up 5 points to 65, which is very good for my age. I’m hoping John’s improves, too, because if it gets any worse he’ll need dialysis or a kidney transplant.”

Cookie reports that her cholesterol and blood pressure improved as well.

“My LDL and total cholesterol dropped,” she says, “and my HDL good cholesterol went up. I haven’t changed my diet; the only change was starting on MPR. My blood pressure was 120/70, whereas it’s usually 140/90 even with my medication.”

“I’m looking forward to being able to get off my BP and cholesterol meds soon!” Cookie adds.

“One thing that caught me by surprise,” Cookie says, “is that John and I both have lost a little weight. I’ve lost ten pounds, and he’s lost six.”

“We’ve only been on MPR a couple of months, and haven’t changed our eating habits, but I think it’s just from having more energy to do more. It makes a big difference!”

Cookie has noticed that their skin looks better, too, she says. “Those brown age spots are fading away, and my skin looks a lot better. John’s color has improved, too. He looks so much healthier now!”

“I’m such a big fan of this purple rice,” she concludes. “I’m planning to be on it for life!”