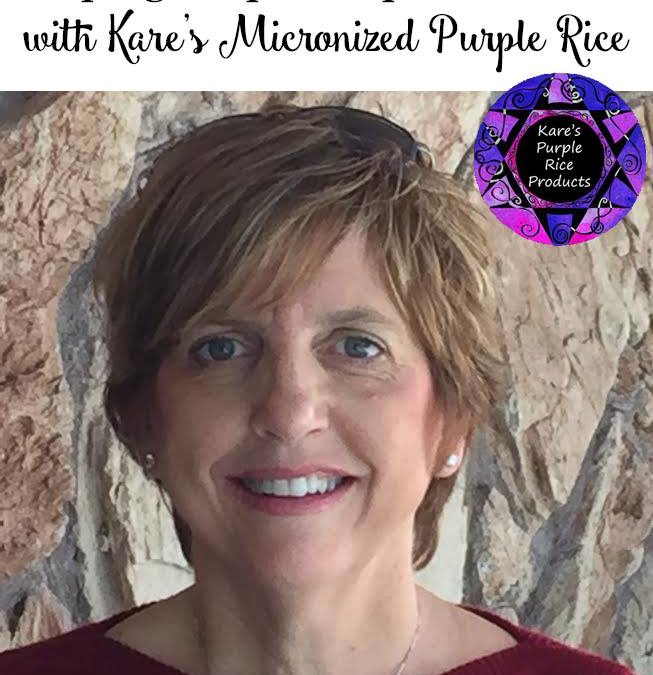 “Helping people is what I am all about!” beams Teresa Rappmundt, 54, of Louisiana.

“I started eating Kare’s Micronized Purple Rice (MPR) on October 15,” she says, “and I now have 15 people eating it with me because they’ve seen what it has done for me and my family. We’re seeing some absolutely amazing results already, and I love how it can help so many people to help themselves.”

“My sister is eating it with me,” she adds, “and we’re starting a support group here in our community where people can get together maybe once a month or so to see how it’s helping people and answer their questions.”

“There’s a girl I work with who was having a lot of acid reflux problems,” Teresa says, “and she told me her reflux is gone now. The wrinkles around her eyes and mouth are gone, too!”

“Another girl had surgery a couple months ago. Well, she said the first day she ate MPR, her scar was itching like it was healing.”

“I’m just loving the way I feel,” Teresa beams. “The energy level is unreal. I get up at 4 o’clock in the morning and walk three miles, do one hour of Body Pump, work eight hours, plus help with my two grandkids, ages 4 and 5. I’m so excited because I’m not tired and I sleep like a baby!”

Teresa first found out about MPR on Facebook, she says.

“I’d been looking for years for something to help my son, who has muscular dystrophy,” she explains, “and my sister, who has diabetes.”

After doing her research, Teresa learned it takes 60 pounds of heirloom purple rice from Thailand to make just one pound of this powerful food.

After learning about MPR, Teresa says, she called Kare’s health coach line, 727-798-8764, because she had some questions.

“I talked with Helen on the phone for over an hour. I thought I’d try it myself before recommending it to my son.”

“I don’t want to go into too much detail about my son’s struggles because of privacy concerns,” she says, “but I will say that he has limb-girdle muscular dystrophy.”

“At first he was skeptical and didn’t want to try the MPR,” Teresa says, “but he did a lot of research on it, and now he’s eating two bottles a month. His skin coloring looks much better now, and his bloodwork has improved.”

“Before MPR, he was falling four to ten times a week, but now he is able to walk without his cane! And today he walked a mile and a half!”

“He’s 32 and has two children, ages 4 and 5,” she says, “that he and I take care of. The increased energy from the MPR has helped a lot with that!”

“One morning when I took my grandkids to school, I had so much energy I hopscotched down the hall. A friend of mine saw it and said, ‘If I hadn’t seen that with my own eyes, I wouldn’t have believed it.’ And I was like, ‘I’ve got the energy! I can move. My back doesn’t hurt, my feet don’t hurt — I’m good!”

The first thing Teresa noticed was that the plantar fasciitis in her feet had improved, she says.

“About three weeks in, I was in church and my aunt was telling me about the weather changing and how her arthritis was kicking in. It was then that I realized that the plantar fasciitis in my feet wasn’t bothering me anymore. I could get out of bed and walk, and I didn’t even notice my plantar fasciitis. My feet don’t hurt anymore!”

“About a week after that I noticed my hot flashes were gone,” she says.

“That was major. I actually turned on the heater! It was crazy — I had been having hot flashes for 15 years, after having a hysterectomy at an early age.”

Teresa’s figure has improved, too, she says.

“I’ve been exercising for years and had not lost any weight,” she says, “but since I started eating MPR I’ve lost 8 pounds. I’m thinking this must be what I needed to give me a jump start, because the energy is unreal.”

“My stomach was very bloated,” she explains, “and I had this big old pooch. Nothing I did would get rid of it. I mean, I walk three miles a day and do an hour of Body Combat or Body Pump, or a core workout, and I still weighed 138, no matter what I did. Not that I wanted to lose weight — I just felt that my pooch should disappear.”

“What the MPR has done,” she says, “is redirect my diet to healthier foods. The water helps a lot, too — it makes me want to eat less. I tell people, you have to be able to drink water to make this work.”

“I’m drinking a lot more water now, which I was not a big fan of before, and I just feel so good! The key to all this is water — the better hydrated you are, the better able your body will be to flush out metabolic waste, then the more energy you’ll have.”

“My body feels so good — it’s hard to describe, but it’s like everything is in balance. And I sleep like a baby now!”

Teresa says her sister is feeling better these days, too.

“She’s going to the doctor soon for her diabetes,” Teresa says, “and I’m looking forward to seeing what her doctor says. This has helped her so much with eating better, drinking the water, and watching the numbers go down.”

Teresa’s nails have improved dramatically, too, she says.

“One day I treated myself to a pedicure. The girl had difficulty cutting my toenails because they were so hard! My fingernails were, too. They always used to split, and they looked jaundiced. Now they’re white. Before they were yellow — and I’m not a smoker.”

“My feet are a lot softer, now, too,” she adds. “They were so rough before. When the girl said, ‘Oh, the lotion I gave you for your feet is really working,’ I told her no, it’s the Micronized Purple Rice!”

“The next thing I noticed was my hair,” Teresa smiles.

“One day a girl at work said to me, ‘Your hair looks so good! Did you just have it highlighted?’ and I said, ‘No, I haven’t highlighted it since September — I just had it cut!’ My hair is a lot fuller and healthier now, and my color is staying longer.”

“Now my husband Paul is eating the MPR too and is starting to see improvements as well,” she says.

“It has helped my gums, too,” Teresa adds. “Normally when I go to the dentist, my gums bleed. When I had a temporary crown taken out recently, my jaw didn’t hurt, and my gums were not irritated or swollen after two and a half hours of being worked on.”

“I really feel I found the missing link,” Teresa concludes. “My energy level is amazing. So thanks, Kare Possick. I so love hearing how well people are doing on this amazing micronized food — it is the best thing I have ever found!”