“My grandson loves his MPR better than any other food!” 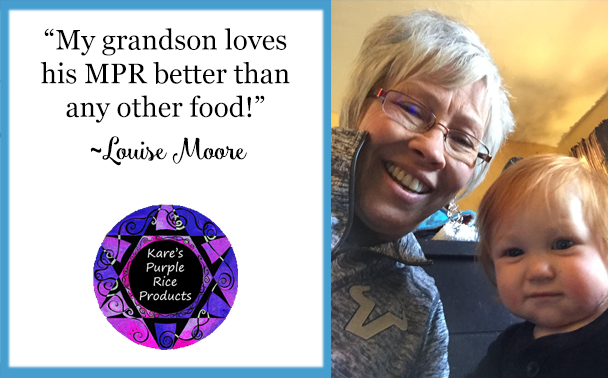 Louise Moore, 67, of Texas was experiencing such bad back pain that she didn’t know how she would be able to help with her new grandson, Jack. But after using Kare’s Micronized Purple Rice (MPR) powder for nearly a year, Louise and her husband are thriving… and so is baby Jack!

“One of the first things I noticed after starting on MPR was my back pain improving,” Louise says. “I wasn’t expecting that, because we had started on MPR for other things, so I was over the moon happy about that!”

“My back had gotten so bad that if I stood for more than five minutes, it would start burning like fire,” she explains. “I was afraid I might not be able to care for our new grandson. But pretty soon after I started using MPR, I noticed that even when my back tightens up a little, it doesn’t hurt anymore. What a huge relief that has been!”

“Our grandson Jack is 10 months old now, and he’s very active and getting into things,” she adds. “So I’m really glad to have the extra energy to keep up with him, and glad my back isn’t acting up anymore so I can play with him and pick him up!”

LOUISE AND HER HUSBAND STARTED ON MPR

NEARLY A YEAR AGO

“My husband, whose name is also Jack, and I started on MPR four days before little Jack was born,” Louise recalls.

“Jack is 69 and works as a carpenter,” she says. “He also makes yard art, and I paint it. We sell essential oils, too, and I love to talk to people about their health and anything I can do to help them. That’s a real passion of mine.”

“We first got introduced to Micronized Purple Rice powder through some health-conscious friends,” she adds. “They had seen some amazing results with it, and knew we were into holistic things too, so they told us all about it.”

The Moores learned how this powerful food can fuel the body, giving it more energy to repair and regenerate, and that it takes 60 pounds of rare, heirloom purple rice from Thailand to make just one pound of powerful MPR powder.

“My husband had been diagnosed with a tick-borne bacterial infection a couple years ago,” Louise says. “He’s been able to control the symptoms pretty well with essential oils, but we thought maybe MPR would help, too. I had also had a colon problem in 2006, so I’m always looking for ways to improve my health and stay healthy.”

“My husband, because of the infection, was having depression and emotional issues, and that improved almost immediately after we started on MPR,” she says.

“Before that he was always tired when he’d come home at night, and he just didn’t feel up to par. But now he can work all day and still have energy at night. His energy is much improved.”

“My grandson Jack just loves his Micronized Purple Rice powder,” Louise beams. “He gets all excited when I give it to him — it’s so cute! I give him a heaping quarter-teaspoon twice a day. We started him on it when he was five months old.”

“Little Jack was born with congenital joint contractures,” she says, “so his hands and arms have been a bit limited, but through physical therapy and possibly help from the MPR, he’s gotten much better.”

“When he was born he couldn’t use his arms, shoulders, or wrists, but now he’s crawling, which is amazing,” she says. “His strength has built up to where he can put his body weight on his arms while crawling. He looks pretty close to normal now.”

“One of the things he’s always done is that when he gets excited about something, since he didn’t have full arm movement, he would kick his legs in a frenzy,” she relates. “Well, that’s what he does when I say, ‘Let’s go make some purple rice!’ ”

“Now he can move his arms,” she adds, “so he does that, and his face lights up. We go to the kitchen and mix it up together and I give it to him — he just loves it!”

“Jack loves to eat, but he really doesn’t like baby food — he prefers what everyone else is having. And MPR is his favorite — he absolutely loves that, more than anything!”

OTHER THINGS IMPROVING FOR LOUISE TOO!

“I’ve also seen improvements in a number of other areas,” Louise relates.

“One is my circulation. I had a spot on my leg that was bulging like a varicose vein. Well, it went down and is smooth now. It had been there for more than 20 years! Also my ankles were almost black with spider veins, but now most of them have disappeared. I’m thrilled because this means my circulation has improved.”

“Another thing is that I’ve had pain in my big toe that would flare up periodically, and it was just excruciating,” she says. “I’ve never had it diagnosed, but I believe it was joint pain from excess uric acid. It has gone away as well.”

“I’ve also had nodules on my neck for quite a while that I could feel. Especially if I ate gluten or GMO foods, they’d enlarge. They’re pretty much gone now.”

Even the family dog is feeling much better, Louise relates!

“We have a little Shih Tzu dog named Bella who’s 8,” she explains. “I give MPR to her, and she’ll get to running and running around the house, so I know she’s got more energy than she had before.”

Thanks to Kare’s Micronized Purple Rice powder, the Moores and their little grandson — and even their dog! — are thriving.

“We’d never be without our MPR!” Louise concludes.