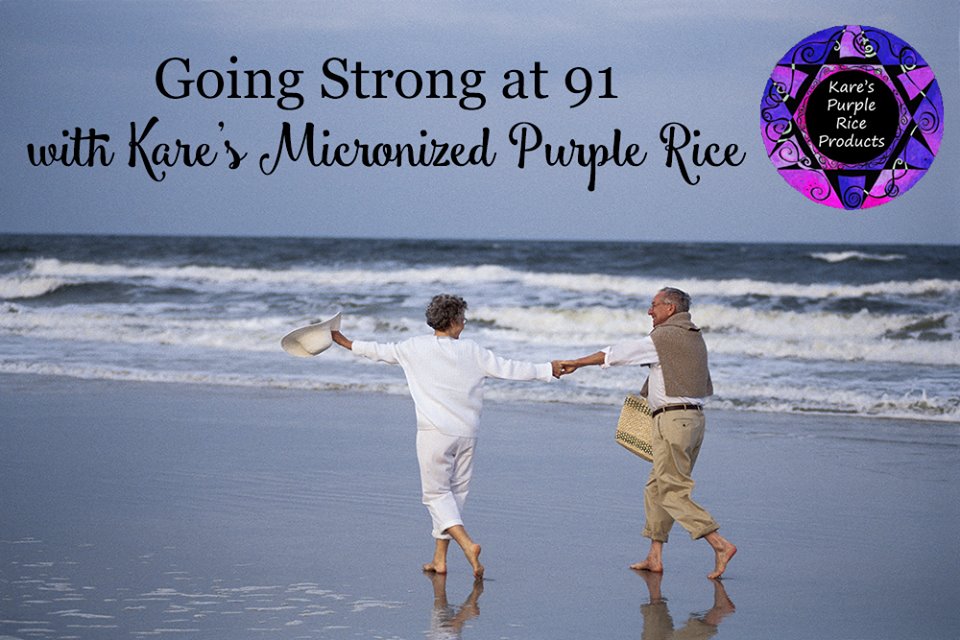 At age 91, Virginia Dickey of southern California is the living embodiment of healthy aging and independent living, thanks in no small part to Kare’s Micronized Purple Rice!

After recovering from heart surgery last fall, Virginia says, she has experienced improvements in her memory, energy levels, mobility, and general wellbeing.

“I’ll pass older ladies on the street,” she says, “and I’ll overhear them saying things like, ‘My doctor says this about my thyroid or that about my blood pressure,’ and it seems they actually enjoy talking about ill health. Personally, I’d rather focus on wellness!”

“My mother was Adventist,” Virginia adds, “and she advocated simple living. I was 16 before I ever tasted mayonnaise. So, I think I was blessed between growing up that way and being given a healthy body to work with.”

Gratitude and a positive attitude, as well as a curious mind and ongoing learning and social engagement, seem to be an integral part of this vibrant senior’s longevity.

“Life is so good — we are all so blessed,” she says. “Often we don’t stop to think about just how many blessings we have.”

“Last October I had to have heart surgery,” Virginia says, “and that slowed me down some.”

“There are four veins that go to the heart, and three of them were blocked. Because of that, I wasn’t getting enough oxygen to my heart and brain. The doctors put stents in to open up my veins and get the blood flowing again.”

“I was overly optimistic,” she laughs, “and thought I was going to go out and run a six-mile marathon afterward, but it doesn’t work that way. It takes a while to recover.”

Virginia found out about Micronized Purple Rice (MPR) through a health magazine shortly before her surgery, she says.

“I was curious about it and called Kare. I was very impressed with her and her husband’s health improvements from using MPR, and I read their story on her website. It was so clear how much she cares for Charles — it must have been such a blessed, happy experience for her when his health improved so dramatically!”

“I talked to Kare about my surgery and recovery,” Virginia adds, “and she was very helpful. She told me it would probably take quite a while to recover and to start seeing results from the MPR, but I’ve been quite pleased with my progress.”

“If I’m going to spend money on something,” she adds, “I like to find out as much about it as I can. So I did a lot of research on Micronized Purple Rice before trying it.”

Virginia learned how this powerful food can fuel the body, giving it more energy to repair and regenerate, and that it takes 60 pounds of rare, heirloom purple rice from Thailand to make just one pound of powerful MPR powder.

“I started on MPR to feel better,” Virginia says. “I wanted more energy, because as you get older you tend to lose vitality. For a number of months before my heart surgery, I’d been feeling very weary. The MPR helped with that quite a lot during my recovery.”

“Recently I increased my MPR powder to two heaping teaspoons in the morning and two in the evening,” she says, “because I’m impatient — I wanted a little bit more pizzazz. It goes pretty fast that way, let me tell you!”

“I’ve also noticed my memory is better,” Virginia says, “which was quite a concern to me. Memory is so important — if you don’t have that, you don’t have much of anything!”

“A doctor explained memory to me in layman’s terms,” she says. “He told me each year is like a filing cabinet. The older you get, the longer it takes to go through all those files to find the information you want. Well, my filing cabinet is working better these days!”

“After using MPR for about two months,” she says, “I noticed my recall time was quite a bit faster. Especially words and names — I’m remembering those a lot better now. MPR has been very helpful in that regard. My memory is a lot better than it was before.”

“This year we’re doing something called the Socrates Club,” she relates. “We discuss current affairs and politics. One guest speaker, a retired history professor, was leading an in-depth discussion recently about how the electoral college works, so that was very interesting. The class starts back up in August, and I’m looking forward to it.”

“It takes me an hour to get there by bus,” Virginia says, “even though it’s only a couple miles away. I see these older people that come to class with walkers or wheelchairs, but I don’t need any of that. I’m very blessed that way. The only time I needed assistance for a while was after having a hip replacement years ago, but ever since then I’ve been fine.”

CAT AND DOG ON MPR, TOO!

“I give MPR to my rescue German shepherd, Heather, too,” Virginia says. “As far as I’m concerned, anything that’s good enough for me is good enough for her, too! She’d already been abandoned once, and I didn’t want that again, so I asked for an older dog. She was 5 when I got her, and now she’s about 11. I think the MPR has made her friskier.”

“I tried giving it to my cat too,” Virginia adds, “but she said forget it. She’s not too enthusiastic about the purple rice, but I may have to sneak a pinch into her food now and then and see if she notices. But Heather will eat anything.”

“As soon as school starts back up I’ll start telling people about my great results with MPR,” Virginia says. “A lot of people would rather take a pill or a shot, because they think they’re going to get immediate results, but it doesn’t work that way. As Kare often says, ‘It’s not a quick fix, but it’s a REAL fix!’ ”