“From floxed to fantastic with KPR!” 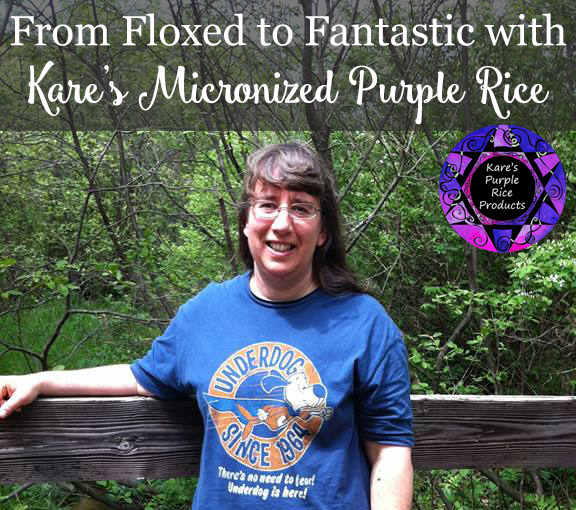 After a devastating reaction to an antibiotic, Ruth Young’s life was turned upside down. But Kare’s Micronized Purple Rice has helped her recover physically, mentally, and spiritually.

In February 2014, Ruth, 47, of Wisconsin, was “floxed” — a term referring to fluoroquinolone (FQ) toxicity syndrome. Her doctor had prescribed the antibiotic chemo drug Cipro (Ciprofloxacin) for a sinus infection. There are a number of similar drugs in the same class, such as Norfloxacin and Levofloxacin, all of which have serious side effects.

Ruth took only seven pills, but they caused horrible damage to her central nervous system.

She assumed the side effects were temporary, however. “I had read the long list of possible side effects, but I was not told they could become permanent and were evidence of actual damage being done to my central nervous system.”

But since her sinus infection had started to clear up after the first pill, she took another. And another.

One day, the terrible effects of the drug became clear to her. She had been playing organ in church every Sunday for more than 20 years. But that day, when she attempted to play, she says, “it felt like my feet were too far from my brain to play the pedals. That told me something was drastically wrong, but I was already in this weird, detached, emotionless place where nothing seemed real.”

Over the next few months Ruth tried to overcome her FQ toxicity with various drugs and natural remedies, including magnesium, antioxidants, and probiotics. She had some improvement and began sharing her story to help other floxies on a website called floxiehope.com.

“The worst thing FQ’s can do to you is to damage your mitochondria,” she says. So she started looking for drugs or supplements that address mitochondrial health.

One day in March 2015, she learned about Kare’s Micronized Purple Rice through an article on Facebook.

She learned that it takes 60 pounds of heirloom purple rice from Thailand to make one pound of MPR. The most nutritious part of the rice is milled so fine that its powerful concentrated nutrients can be absorbed through the cell membrane, where they light up the ATP in our mitochondria (cellular batteries), and assist in cellular regeneration.

“MPR’s polysaccharides, polypeptides, and antioxidants are just what our mitochondria need, making it the perfect food to help floxies recover,” Ruth believes.

“Kare explained to me that it’s not a drug — it’s just food. It’s milled so small that it gets into our damaged cells, and that’s what I have — damaged cells. I feel safe taking this product for the rest of my life.”

After she started taking it, three things happened within two weeks: “My left Achilles’ tendon stopped hurting when I ran uphill as part of my workouts, my blood pressure dropped to normal and my blood sugar levels came down to normal instead of pre-diabetic. I started to feel really, really relaxed. I also felt happier. And my sleep got a lot better.”

Ruth has been on MPR for about eight months now, and continues to reap the benefits. “I have noticed that I am cognitively sharp now. I regained all I lost, and although I frequently had brain fog and memory issues before, I don’t have those issues now, thanks to MPR.”

She even has her cat Monty on Purple Rice, too! “Monty has been getting PR for quite a while now, and I notice he wants to play more and he hunts more outside.”

Ruth is feeling much stronger physically as well. “I do a lot of walking and some strength training every week. My standing and walking tolerance is excellent.” She is able to do heavy lifting again, working with fireworks, doing heavy cleaning, and so on. “I used to do heavy work before being floxed, and it feels so good to be able to do it again!”

“I always feel triumphant when I get a little more of my life back,” she concludes. “Thanks to Kare’s Micronized Purple Rice, I am well on my way to full recovery!”

For more information about the purple rice, check out my website here: www.karespurplericeproducts.com and hear from lots of others who are eating the rice in my Facebook Group here: www.facebook.com/groups/karespurplericeeaters <3