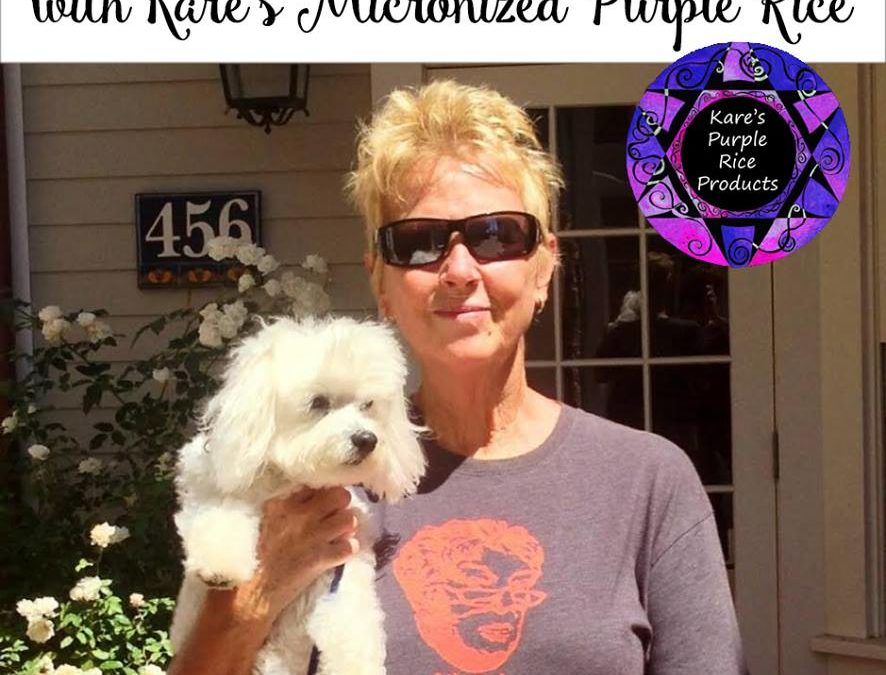 At 66, health coach and world traveler Suzen Fields is as healthy and vibrant as ever, thanks to Kare’s Micronized Purple Rice (MPR). And so is her 13-year-old Maltese, Annie!

“I’m very fortunate to be super healthy,” says Suzen, who lives in Florida, “and I don’t really have any aches or pains or other issues, so I eat MPR mainly for its anti-aging benefits and cellular repair.”

“This is the most important age preventer I could possibly put in my body.”

“This is the very best thing I can do for my body, at a foundational level. I also eat a very clean diet, exercise regularly, and drink lots of pure water.”

HELPING HER DOG GET HEALTHY, TOO

“My little Maltese, Annie, a 13-year-old bundle of love, has been eating the Micronized Purple Rice twice a day for nearly a year now,” Suzen says.

“I just sprinkle it on her food each time she eats. She had low energy when I started her on it. She never wanted to go for a walk, and didn’t play with her toys. AND she was diagnosed with bladder cancer in May 2015.”

“The doc gave her 6 months,” Suzen explains, “but now, 9 months later, Annie looks better and definitely feels better! She runs to the door to go for a walk, has torn the legs off her stuffed animal from playing self-fetch and throwing it around, and she even buried a toy bone!”

“Oh, and even though the vet says she still has bladder cancer, it is NO worse than it was nine months ago!” Suzen adds.

GETTING STARTED AS A HEALTH COACH

Suzen first met Kare a number of years ago at a vision board making workshop, she says. The two of them hit it off and have been friends ever since. And many of the things on their vision boards have come true!

After learning about MPR and seeing the amazing results that Kare and her husband Charles were having, Suzen started eating MPR over a year ago.

“I love working with Kare and being a health coach,” Suzen says, “because I love hearing from people getting great results from this powerful natural food. I hear amazing stories all the time about how people are looking better, feeling better, and healing their bodies naturally.”

ANTI-AGING AT ITS BEST!

“I believe you can get healthy at any age,” Suzen says.

“Some people will ask me if they can get a sample, or try just a little bit,” she says, “but I tell them they’re not going to get results that way because it’s not a magic bullet, and change doesn’t happen overnight.“This is a food that begins working at a very deep cellular level – recharging, repairing, and regenerating – most people have to eat it for 2 or 3 months before they begin seeing significant changes.”

“By all means, don’t make a decision after the first bottle,” she adds. “That’s just not enough time.”

Suzen is an excellent health coach because she really listens to her customers and helps them figure out how the Micronized Purple Rice can help them.

“I tell people the proof is in the pudding,” Suzen concludes. “I can tell you all day long what it’s done for me or for other people, but it’s really about what the MPR will do for you, how it will make you feel. You won’t know until you try it!”