“I felt so personally cared for!” 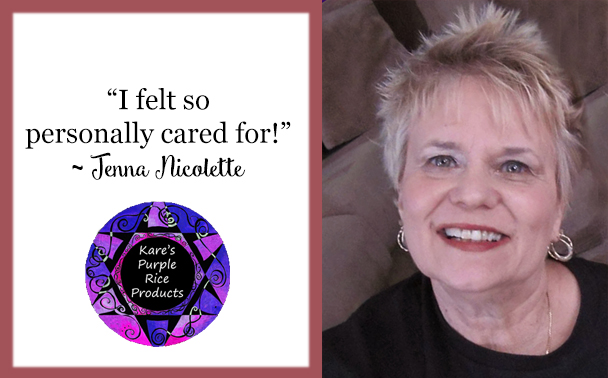 Jenna Nicolette, 69, a semi-retired hair stylist from Maryland, was so sick with previously undiagnosed thyroid trouble that she was literally prepared to die — until Kare’s Micronized Purple Rice (MPR) powder helped her recover.

“At one point last summer I had my things laid out, with people’s names on everything, to give to my loved ones if I died,” Jenna recalls. “That’s how close I came. My bag was always packed to go to the hospital. I never knew when — or even if — I’d come home.”

Jenna had lost 35 pounds in two months from being unable to eat, she says.

“My thyroid T3 had gone so high that it shut down my whole digestive system to where I couldn’t eat or swallow anything. And when I did swallow water, it went right out the other end. The doctors couldn’t figure out why my T3 was so high.”

“After they released me from ER, I couldn’t take care of myself,” she relates. “I could barely go from my bed to the couch.”

“But then one day Kare’s video popped up on my Facebook,” she says. “It felt like she was talking right to me, and she asked me if I wanted to get my life back. It shocked me — I was losing my life! I actually said, out loud, YES! I felt like if something didn’t happen soon, I wasn’t going to make it.”

“I called Kare’s health coach line and spoke with Teri,” Jenna says. “She was kind and helpful, and I remember telling Kare later that it felt like sitting down and having a cup of tea with someone. I felt cared for rather than being sold to.”

“Teri put me in touch with Kare, who had also had thyroid trouble, and I explained to her how I couldn’t keep anything down. Rather than taking a cookie cutter approach, Kare really listened to me and helped me figure it out.”

Jenna learned how this powerful food can fuel the body, giving it more energy to repair and regenerate, and that it takes 60 to 100 pounds of rare, heirloom purple rice from Thailand to make just one pound of powerful MPR powder.

“I later learned I have a disorder that attacks the thyroid,” Jenna says, “but it hadn’t been diagnosed at that time, when I was so ill. It all makes sense now.”

“I started at a smaller than normal amount of MPR,” she says. “My diarrhea went away slowly after about a week, and then I was able to eat solid food again. After just a week I was passing formed stools. The diarrhea was gone!”

MPR has helped Jenna in other ways as well, she relates.

“I had gum disease, with very deep pockets,” she recalls. “Well, I just recently had my teeth cleaned, and my gums were not bleeding. The pockets are greatly improved, and my dentist said my gums look the best they have in a long time.”

“My fingernails have also improved,” she relates. “They’re hard now, whereas before they were splitting and unhealthy because I was malnourished since I couldn’t digest my food or take vitamins. My hair is better, and my sleep has improved as well.”

“My big cat LeeLee and little cat KeeKee are on it, too,” she smiles. “They’re both 6. LeeLee weighs 27 pounds, and KeeKee is only 7 pounds! LeeLee was losing hair on his belly, but now it’s coming back in, and he has slimmed down. I put about half a teaspoon on his wet food every day, and just a pinch for KeeKee. He has a bad eye that used to weep, and now it has cleared up. They both love it!”

“I can’t emphasize enough about how I was treated personally, according to my needs. That really means a lot to me. I was so very ill, and the doctors had put me through so many hoops without helping me. I was glad not to be treated in a cookie cutter fashion, and that’s what won my friends over, too. They were so afraid I wasn’t going to make it.”

“I am retired, but I have a beauty shop in my basement,” she adds. “I lost most of my clients when I was sick, but now I’m back to doing hair. MPR helped me have the energy to where I could take a shower and put clothes on and go down to my shop.”

“It has been a true life saver for me,” Jenna concludes. “I never want to be without it!”