“I felt drawn to KPR and it turned out to be a blessing!” 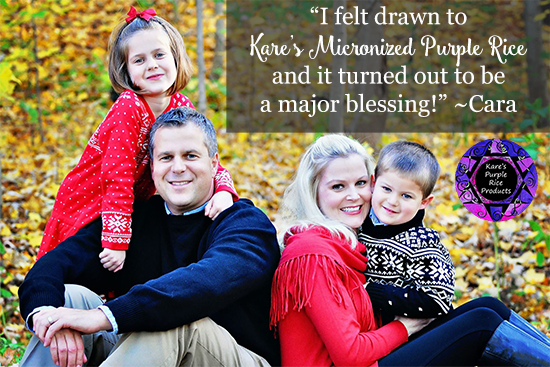 Cara Carver Olson, a young mother from Indiana, experienced huge changes after increasing her Kare’s Micronized Purple Rice (MPR) from one to three servings per day!

Cara, 37, has been on MPR for nearly a year and a half, but prior to June she was eating only one serving a day. At that time she not only increased the amount but also switched from capsules to powder, for faster absorption.

A licensed clinical social worker and mental health therapist, Cara is always on the lookout for health-promoting foods.

Before starting on MPR last year, she had been suffering from adrenal fatigue and narcolepsy and was looking for something that would give her more energy. With two young children — a daughter, 7, and son, 5 — she needs all the energy she can get!

Cara’s doctor had put her on medication, but it was making her feel ill, so she started looking for natural alternatives. That’s when she found Kare’s Micronized Purple Rice.

“I’m a spiritual person,” Cara says, “and I believe everything happens for a reason. I felt drawn to Kare’s site, and it turned out to be a major blessing!”

She learned that it takes 60 pounds of heirloom purple rice from Thailand to make one pound of Kare’s Micronized Purple Rice. It is milled so fine that its powerful concentrated nutrients can be absorbed through the cell membrane, where they light up the ATP in our mitochondria (cellular batteries), and assist in cellular regeneration.

“Other than the fatigue and narcolepsy, I was in pretty good shape before starting on the rice,” she says, “although I had a bit of scoliosis and resulting sciatica pain.”

While using one bottle of capsules per month for nearly a year, she saw slow but steady improvement.

“I noticed my sciatica was getting better,” she says, “and by March 2015 the spider veins in my legs were almost gone. I had had laser treatments on them in the past, but they came back. I was told I would need surgery to fix them, but after being on MPR they faded considerably. Now I no longer need surgery!”

In June, after reading the many exciting posts in the Kare’s Purple Rice Eaters Facebook group, Cara decided that one bottle a month was not enough. She wanted to experience the dramatic changes people were talking about in the group.

So she committed to three bottles a month. And boy is she glad she did!

“My skin appears to be glowing!” she says. “People have been asking me what I’ve been doing differently to look so much better.”

Her eyelashes have gotten incredibly long, too, she says.

“I had such long eyelashes in my twenties that guys would often ask me, as a pickup line, if my lashes were real. But as I got older, they got shorter and thinner. Since I increased my MPR, though, they are getting super-long again. My top eyelashes are so long now that they touch the ridge of my brow. I still have to use mascara on them because they’re so pale, but now they’re full and thick again like when I was in my twenties. My eyebrows have filled in, too.”

Cara’s jawline has tightened up considerably, she says, “and my hands and feet have warmed up.”

“My nails are super strong, my hair is growing thicker and faster, and my hair stylist has commented on its color looking richer. I’m sleeping more soundly, and my sciatica is a lot better.”

She reports emotional enhancements from the increase as well: “My mood is more even keeled, and I don’t get overwhelmed. My sugar cravings have decreased dramatically. My hormones are pretty even, too.”

In August, two months after she increased her MPR, her bloodwork improved, and, she says, “I was able to go off some of the very expensive supplements I had been taking. I was very happy to be able to save money that way!”

“E.J. has been using two bottles a month since June,” Cara says. “He has ruptured disks in his back, and the resulting pain has gone down dramatically. His gray hair is getting darker, too! Before starting on the rice, he had a lot more gray on the sides than he does now. These days he’s working out and is in better shape than ever. He has a lot more energy and is very strong!”

Even the family dog, Penny, is on Kare’s Micronized Purple Rice. Penny, a standard poodle, will be 7 soon. She weighs around 40 pounds, so Cara gives her a teaspoon a day.

“She was starting to get some filmy cataracts in her eyes,” Cara says, “but after we put her on MPR, the cataracts are less pronounced. She has more energy now, so I need to walk her more often. She really likes her MPR!”

Cara and her beautiful family are a true testament to the power of Kare’s Micronized Purple Rice!

For more information about how you can get the Micronized Purple Rice for yourself or your family, click: www.karespurplericeproducts.com