“I feel like I could turn cartwheels in the street!” 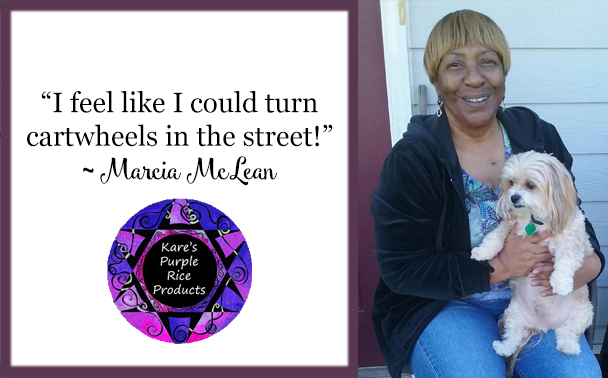 Marcia McLean, 65, of Kentucky, and her little dog Jaycee, 8, are both feeling amazingly good these days, with help from Kare’s Micronized Purple Rice (MPR) powder! “Jaycee is a shih tzu yorkie mix that doesn’t know he’s a dog,” Marcia laughs. “He thinks he’s one of us. He loves to dress up, and he’s spoiled rotten!”

“When I first learned about MPR,” she recalls, “I felt I couldn’t afford it, but in August I had a heart attack. After that my health went down and I was feeling awful — so tired all the time and just lying around on the couch.”

“I thought, ‘I’m going to try it.’ So I took money I didn’t have and bought it — I just did it. I was really tired of not being able to do anything.”

Marcia learned how this powerful food can fuel the body, giving it more energy to repair and regenerate, and that it takes 60 to 100 pounds of rare, heirloom purple rice from Thailand to make just one pound of powerful MPR powder.

“As soon as it arrived I measured 2 oz. water and 1.5 teaspoons MPR and drank it down,” she recalls. “I went to bed, and when I woke up I realized I had slept through the night without having to get up once!”

“The way I feel when I wake up has really got me excited,” she adds, “because I hadn’t slept well in years. Now when I lay my head on the pillow at night, I sleep straight through until my eyes pop open at 6, and I wake up with a smile on my face. It’s the best feeling in the world!”

“And because sleep helps our bodies heal, my energy levels are up, and I don’t have to nap on the couch anymore,” she says. “I feel good all day.”

“I also feel like I’m losing weight,” Marcia relates, “since I’m not craving sweets anymore. I’m really looking forward to seeing my blood results, too, because I feel that everything has improved. I feel like I could turn cartwheels in the street!”

“Jaycee likes to have everything I have,” she smiles. “He always cocks his head to the side, like, ‘What are you doing? I want to do it too.’ So I gave him a spoonful and he licked it right off the spoon and looked at me for more. He’s a very finicky dog, so I was amazed that he licked it clean.”

“He loves to jump up on the couch,” Marcia says, “but in the last few years he started having trouble with it. But since he’s been on MPR he springs from the recliner to the couch to get in my lap, and he does a little dash through the house to get his treat. I think his joints were hurting before, but now he’s feeling so much better that he just wants to run and jump and play.”

“Joint pain relief is one of the things I’ve experienced for myself as well,” she adds. “I had surgery for torn cartilage back in the 1990s, and that knee had been bothering me. I couldn’t even step down on the sidewalk from the car before, but now I don’t even think about it — I just do it, with no pain.”

“I was having joint pain in other areas too,” she adds, “but now I have no joint pain at all. I even had a knot in my wrist, but now it’s gone!”

“So many people say they can’t afford it, and they’re not willing to take a risk and try it. I’m on social security, but I don’t see any way that I’m going to be without it, even if I have to sell my car. I’m a purple rice eater for life!”

“I want to get the word out,” Marcia concludes, “that if you want your body to heal properly, this is what you need. I want to let people know there’s hope and you can heal if you help your body to help itself.”