“I feel like I have my husband back again!” 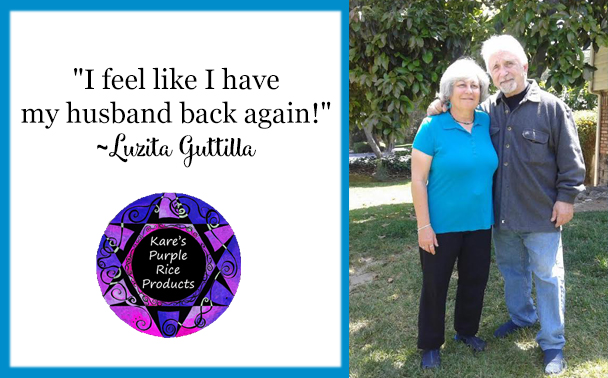 When Luzita Guttilla’s husband Peter started having mini strokes, she knew she had to find something natural to help him. Kare’s Micronized Purple Rice turned out to be the answer.

Peter, 72, and Luzita, 64, live in southern California, where Luzita works at a school district, helping special-needs kids. Peter is a well-known writer who specializes in paranormal activity.

“About two years ago,” Luzita says, “Peter had his first mini stroke, or TIA (transient ischemic attack). The doctor told us he has atrophy in the back lobe of his brain, and he was diagnosed with first-stage dementia.”

“For a writer and someone who speaks a lot — he’s been on radio and TV for years — this was devastating for Peter.”

“It was very hard on me as well,” Luzita adds. “Suddenly my partner of 44 years was not communicating like he used to, and was very foggy brained. He was also lethargic and shaky on his feet.”

“He’d become rather confused,” she adds, “and had balance issues, mood swings, and depression. I felt as if I’d lost my husband, friend, and companion of over 40 years.”

“I didn’t want to give him any drugs,” Luzita says, “so I started looking for natural alternatives.”

STARTS ON MPR IN FEBRUARY 2016

“I was amused by the ‘Purple Rice Eaters’ name — it drew me in,” she laughs.

“I read a lot of the testimonials, and was very intrigued. I called and spoke to health coach Jan Stern, who was super friendly and helpful. Then I had a nice talk with Kare after that.”

Luzita learned how this powerful food can fuel the body, giving it more energy to repair and regenerate, and that it takes 60 pounds of rare, heirloom purple rice from Thailand to make just one pound of powerful MPR powder.

“After learning about MPR and speaking with Jan and Kare, we decided to try it. What did we have to lose?”

“Well, after just one month, Peter’s brain fog lifted,” Luzita says. “He’s become more communicative and is much steadier. He’s conversing with me, and I feel as if I have him back again!”

“Everyone has noticed he’s so much clearer now,” she adds. “I’ve been giving him extra MPR lately, and that seems to help.”

“I am feeling much better now,” Peter agrees. “Looking forward to seeing what else the Micronized Purple Rice does for us!”

“We’re also getting our bloodwork done soon to compare our numbers from January,” Luzita says. “We’re looking forward to seeing the improvements in our blood pressure and cholesterol.”

“My own experience with MPR began with better sleep,” Luzita says. “I’ve been sleeping more soundly, and I have more energy throughout the day. Also, my eliminations are easier, and I feel a strong sense of calm.”

“My skin tags have all but disappeared,” she adds, “and my hairdresser said my white hair seems to be coming in darker underneath. Now that’s definitely anti-aging!”

“Like most people, I’m carrying a bit of extra weight,” Luzita says, “but I feel like I’m eating less and not wanting as much food. I’m also drinking more water now, since it helps to flush out the cellular wastes created by the healing process.”

“I don’t get cravings much anymore,” she adds. “I can have one or two cookies and not want more. It has helped me with my appetite, and now I’m satisfied with less. Used to be you’d put a plate of cookies in front of me and they’d be gone, but now I’m making conscious, healthy food choices.”

“Even though I still get depressed at times from all the things going on,” she says, “I’m not using food as a remedy. I think that’s been a major thing in my life.”

Luzita experienced a bit of emotional detox in the beginning, she adds.

“When I was eating MPR three times a day, which we did for about two months,” Luzita says, “my emotional level for a while there was really ‘shrieky,’ as Peter put it — super sensitive, crying over everything. But I’ve gotten over that now, and these days I feel a nice steady calmness that’s just wonderful.”

“Things are so much better for both of us now, and we are looking forward to seeing what else improves!”