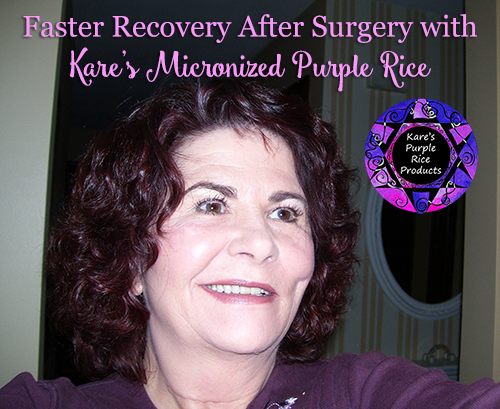 After 43 years as a hairdresser, Denise Shepherd needed major neck surgery. And thanks to Kare’s Micronized Purple Rice (MPR), she came through it with flying colors!

Denise, 59, had developed degenerative disc disease from her years of working as a cosmetologist in Grand Rapids, Michigan.

“Being a busy hairdresser is grueling,” says Denise. “You’re on your feet all day. It’s very hard on your body, and stressful on your mind, too, because you’re always ‘on.’ All the chemicals don’t help, either.”

She’d been having terrible pain and migraines for several years, she reports.

“I believe God guided me to the MPR,” she says, “because I was in so much pain all the time, and I was begging for help.”

She learned that it takes 60 pounds of heirloom purple rice from Thailand to make one pound of this powerful wellness product. The most nutritious part of the purple rice is milled so fine that its concentrated nutrients can be absorbed through the cell membrane, where they can fuel the mitochondria (cellular batteries) which then produce ATP, or pure light energy. The cells are then recharged, repaired and regenerated.

“I studied the MPR for three months before I decided to do it,” she says, “because if I was going to make a commitment, I was going to go all the way. I’ve tried a number of other things in the past, and there’s just no comparison.”

Denise’s surgery was on September 15 of this year, she says. “Kare helped me through it and counseled me on what I should do to prepare beforehand.”

Starting on MPR three months earlier, on June 20, gave Denise time before her surgery to prepare physically as well as mentally, she says.

“I ate MPR three times a day until my surgery, and I also took her company’s minerals to help prevent staph infection. Also, to help with my low energy and headaches, I drank her special anti-stress juice that helps the body adapt to physical, mental, emotional and chemical stressors. I followed Kare’s directions so I could keep working.”

“I had to pass a pre-op physical before I could have the surgery,” she adds, “and I passed it with flying colors, thanks to the MPR.”

On the day of her surgery, she was ready.

“The doctors cleaned up my bone spurs, reshaped the bones, and did a triple discectomy fusion. They restructured my whole neck — removed the discs and replaced them with donor discs, held together with plates and screws.”

Denise credits Kare’s Micronized Purple Rice for getting her through the surgery and helping her recover faster than expected afterward.

“I was able to take off the neck collar after just two days,” she says. “I pushed myself to heal quickly because I needed to get back to work as soon as possible since I have no other income. They had told me it would take up to three months before I’d be able to return to work, but with help from MPR I was back in just six weeks.”

“And, after only five days,” she says, “I was walking a mile, escorted by a friend. Carefully, mind you! But I figured it was my neck that was injured, not my legs. I am now about 80 percent improved, pain-wise. My headaches are minimal now, and the MPR helps me to not be tired.”

She’s seen great improvement in other areas as well, she reports.

“I had high blood pressure, high cholesterol, high triglycerides, and massive body aches and migraines. My blood pressure was through the roof — around 180/111 at its highest. Now it’s 127/72 — and my triglycerides dropped 83 points!”

Her night blindness, sinus irritation, rashes, heartburn, and sleep problems have greatly improved, too, she says.

“Even my gums are better,” she reports. “There’s no bleeding, and no issues with my teeth anymore. My knee pain has decreased about 90 percent, too, and my other joints are much improved as well.”

Denise has started a number of her friends and clients on MPR, too, she says.

“When they saw my improvements, like my saggy skin tightening and my hair roots growing in less gray, my customers went nuts. Now I only color my hair about half as often as I used to — about every two months instead of every three weeks! The new growth blends into the colored hair much better because it’s not nearly as gray.”

“I also have steady clients who’ve watched me go through all this intense pain, and now they see me as a new woman. I’m back to me again — and I tell them it’s the MPR! Sure, the surgery helped too, but I had to have the MPR to get through the surgery.”

“People with graying hair — I tell them if it’s improving your gray hair, think what it’s doing inside! They’re smiling and happy and saying, ‘Thank God I trusted you!’ and that’s making their family members want to use it, too!”

Denise has even lost weight, she reports. (Some of it was before MPR.)

Her cat Charlie eats it too, she says. “Charlie has serious liver and pancreas problems. I’m giving him as much raw food as he’ll eat plus the purple rice, and he craves it. I give him a quarter teaspoon a day, and he’s getting better. He’s 10 or 11 now, and I’m seeing fewer side effects of his liver and pancreas ailments.”

“I really think the purple rice has saved me,” she concludes. “And I think the whole world needs to be on this, with all the pollution and garbage that we have in our food. We all need it.”

To learn more about the Micronized Purple Rice, watch Kare’s videos, and get her FREE E-Book, click: www.karespurplericeproducts.com