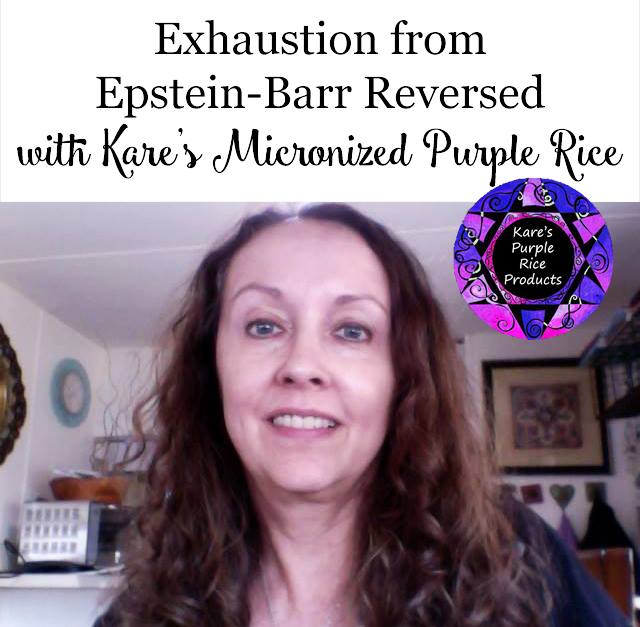 Deane Malaney, 61, has gone from feeling like her life force was ebbing away to living a vibrant life full of stamina and strength, thanks to Kare’s Micronized Purple Rice (MPR).

“I had suffered from Epstein-Barr virus off and on for many years after having mononucleosis as a teen,” says Deane, who lives in California. “I felt like I was dying, and I was desperate for a solution.”

“The Epstein Barr virus made me feel completely wiped out, like my life force was ebbing from my body. No energy. Completely drained.”

Asthma was making her life miserable, too, she relates.

“In 2007, I was diagnosed with severe adult-onset asthma. I was taking a prescription-strength allergy pill and a steroid inhaler twice a day just to control it.”

Deane remembers being admitted to the emergency room, where she was given IV steroids and continuous nebulizer treatments, as well as large doses of oral steroids.

“I was so tired of being sick!” she says. “I had tried everything, including adapting a vegan diet. But I was beginning to think and act like an elderly woman. Something had to change.”

That was when her friend Kare Possick contacted Deane, excited to tell her all about Micronized Purple Rice.

“I figured if this rare food could help lower Kare’s cholesterol by 73 points in one month, and help normalize her husband Charles’ blood sugar in 90 days, then surely something miraculous could happen for me, too,” Deane relates.

Today, nearly two years after starting on MPR, Deane’s life is much different.

“MPR far exceeded my expectations,” she relates, “and it continues to pleasantly surprise!”

“The first thing I noticed after I started eating MPR was that my energy came back,” she says, “and I felt a greater sense of well-being. I could now sleep soundly and awaken feeling refreshed. My skin was starting to glow, and I had only been eating this raw, vegan superfood for a week at that point!”

Deane has seen huge improvements in her asthma, too.

“After just three months of eating MPR,” she says, “I came off all meds with the exception of my rescue inhaler. My symptoms went from severe to occasional mild episodes of wheezing. On rare occasions I still use an albuterol rescue inhaler, but only when the pollen or mold is really heavy, and not daily like before.”

Regarding her blood pressure, Deane says, “I think one of the most profound changes is that I was able to come off a BP med that I had been on since my early 30s, and have remained off for nearly two years now.”

After three months, her results were impressive:

And after 12 months, they were even more impressive:

And today, Deane says, “My energy level, stamina, and endurance are just incredible!”

“This is only thing I’ve ever come across that I can say for sure delivers on what it says,” Deane concludes. “Some people have a mindset that says, ‘This sounds too good to be true.’ This IS true, but the only way to know is to try it for yourself.”