“I am even hearing better!” 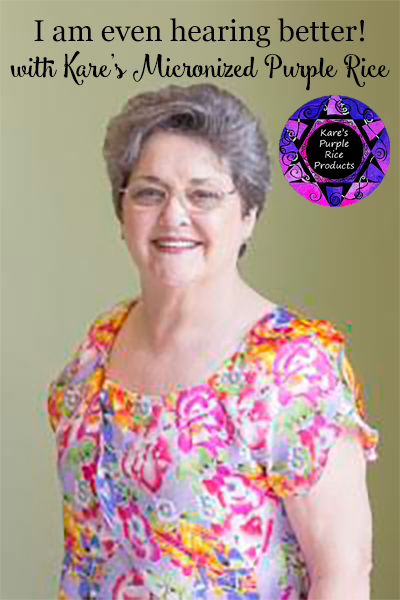 Jeannette Wilson, 65, of Louisiana tried for years to lower her cholesterol with medications, but they made her ill. Thanks to Kare’s Micronized Purple Rice, though, she is finally bringing it down — naturally!

“I’ve been battling high cholesterol for quite a while,” Jeannette says. “It’s been well over 300 at times.”

“I’d tried various cholesterol medications in the past,” she relates, “but the best result was a drop of only 10 points. Finally I got to the point where the medication made me feel so bad, and ache so much, that I quit taking it.”

Jeannette’s doctor was not happy about that, she says.

“My doctor told me, after doing blood work last year, that I would HAVE to go on cholesterol medication again. But I told her, ‘All I HAVE to do is pay taxes and die, and if Jesus comes back beforehand, I don’t even have to die — I can just go right on up with Him.’ ”

“Well, she got kinda frustrated with me,” Jeannette sighs, “but I told her I was going to try some natural things instead.”

“I called a very dear lady by the name of Ms. Christine Rodriguez, who also lives in Louisiana, and asked her what I could do to help lower my cholesterol naturally.”

“Ms. Christine is a natural health practitioner,” Jeannette says, “and she told me, ‘Well, I’ve got this product you can try, called Micronized Purple Rice, or MPR.’ ”

Jeannette learned how this powerful food facilitates healing in the body, and that it takes 60 pounds of heirloom purple rice from Thailand to make just one pound of MPR powder.

“At first I was very, very skeptical,” Jeannette says, “especially since I’ve been eating rice all my life. It’s very big here in Louisiana.”

“Normally I wouldn’t try something like this,” she adds, “but because I know Ms. Christine so well, I told her I’d give it a shot.”

“When I went back to my regular doctor for the results of my recent blood work,” Jeannette says, “she told me my total cholesterol had dropped 40 points. She couldn’t believe it! That was after four and a half months of eating MPR. Other than that, I did nothing different.”

“I made a copy of my blood work to show Ms. Christine,” Jeannette says, “because that’s the proof in the pudding.”

“When my doctor told me that,” Jeannette relates, “I was so ecstatic that I was jumping around like a 20-year-old! I’m not saying the MPR made me feel that much younger, but I was just excited and happy about my results.”

“Other than my cholesterol,” she says, “my doctor told me I’m very healthy.”

“The nurse in the doctor’s office even asked me where she could get some MPR,” Jeannette says. “I keep information about it with me, so I gave her a copy of Kare’s book, “You’re How Old? How to Recharge, Repair and Regenerate Every Cell in Your Body!”

MORE ENERGY AND IMPROVED HEARING, TOO!

“Not only that, but my skin is not as dry as it was. Before MPR, I would rub my forehead and it looked like it was snowing, my skin was so dry. It’s not like that now.”

“Also, I had a huge bunion on my foot,” she adds. “I’m not saying it went away, but it’s definitely getting smaller.”

Jeannette’s hearing has improved, too, she says!

“When I would watch TV at night,” she relates, “I used to keep the volume around 65, because I had trouble hearing it. Now I’m keeping it around 40 because it’s too loud at 65.”

“The day I went to the doctor to see my blood work results,” Jeannette says, “I had made up my mind that if there was no improvement, I’d quit. But after seeing that 40-point drop, let’s just say I’m amazed, I’m impressed, and I’m a believer. I’m so excited about MPR — I’ve been telling everybody!”