“Even our 7-year-old grandson has noticed the difference!” 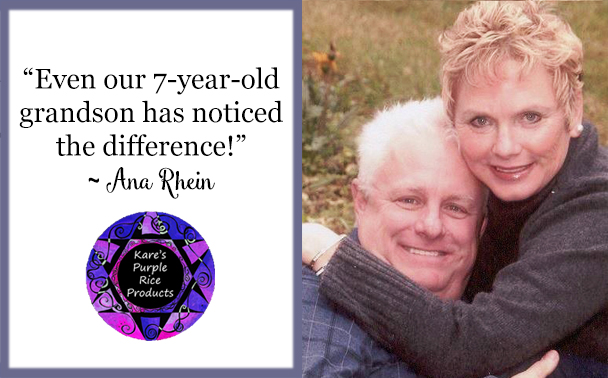 Ana and Alan Rhein of southern California were fed up with medical procedures and decided to get healthier the natural way, with Kare’s Micronized Purple Rice (MPR) powder.

Ana, 66, and her husband Alan, 70, had been through a lot in recent years, Ana relates.  “Alan was diagnosed with an incurable lung disease three years ago, and I was suffering from the effects of a bad car accident. I was in pain every day from that, and I felt hopeless. Also, since age 35 I’d been wracked with hormone-driven migraines, and I had knee pain and other issues from having been a competitive athlete in my youth.”

“Alan is on a new drug that costs $80,000 a year,” she says. “He’s been on the medication for three years now, but his lung disease has not improved. We read a testimonial from a woman who has the same disease, and MPR is helping her, so we were hoping it would help him, too. Since he’s been on it, his condition hasn’t gotten any worse, and his immune system seems to be getting stronger — he hasn’t caught the flu even with our grandkids around all the time. We’re still praying.”

“I’ve had a lot of painful procedures done on my back,” Ana says, “and I got fed up and decided to get healthier naturally. That was when I found Kare! I read her book, studied her website, watched her videos, and followed what people were saying in the Purple Rice Eaters group on Facebook. People are so helpful in there! I knew we had to try MPR. That was about eight months ago.”

Ana and Alan learned how this powerful food can fuel the body, giving it more energy to repair and regenerate, and that it takes 60 to 100 pounds of rare, heirloom purple rice from Thailand to make just one pound of powerful MPR powder.

“Right away the first thing I noticed was my eyes,” Ana recalls. “I didn’t need my glasses so much anymore. I had kept my old glasses from years past as extra backups, and I found I could no longer wear my newest prescription anymore — it was too strong! I had to go back to my glasses from 5 to 7 years ago, or even longer. My eyes continue to get better. Now I can get on my smart phone and text and read without my glasses, which is huge.”

“Another thing I’ve noticed is that my weight has shifted,” she says, “and I lost 25 pounds without really trying! I’m eating healthier foods now, and my surgeon put me on the Paleo diet. It’s really a lifestyle for me because it’s all about inflammation. I avoid sugar and refined carbs, dairy, and processed foods. You can’t eat junk at my age and expect to feel good.”

“My skin is so nice now, too — it has done a natural lift!” Ana concludes. “I told Kare that even my 7-year-old grandson has noticed the difference. He said I’ve got happy cheeks now, and my face is glowy and isn’t all gray anymore.

I love telling people about MPR, and I’ve been giving out Kare’s books like crazy!”