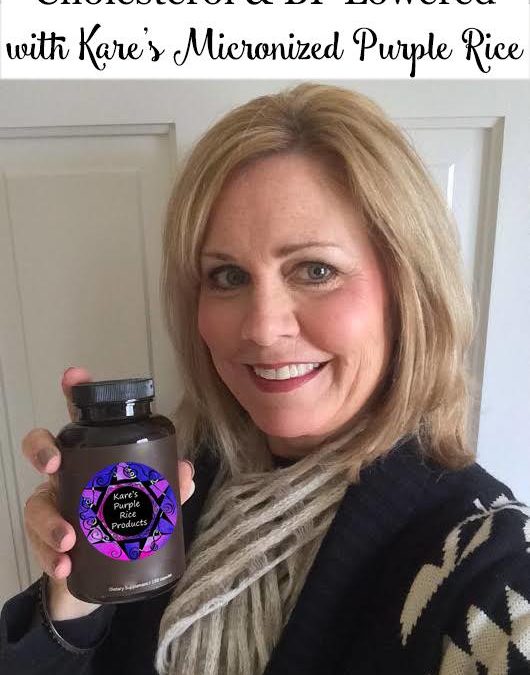 With a family history of heart problems, Trish Drendel of Illinois was elated to find a way to lower her cholesterol and blood pressure naturally with Kare’s Micronized Purple Rice (MPR).

Trish, who’s 54, has always had a sensitive system that doesn’t tolerate medication well, she says.

“With my cholesterol near 300, my cardiologist prescribed statins,” she explains, “but they gave me such horrific leg cramps that I had to go off them in less than two weeks. Shortly after that, I found MPR.”

“About 12 years ago I had a full hysterectomy,” Trish explains, “and from that point on my blood pressure and cholesterol just kept climbing. I’d never had problems with them before that.”

“I exercise three to five times a week, drink lots of water, and eat healthy foods,” she adds, “but by the time I started on MPR last year my total cholesterol had climbed to nearly 300. I knew I needed to find a natural solution, and I’m sure glad I found MPR!”

“With my low energy, high blood pressure, and skyrocketing cholesterol,” she says, “I was desperate to find something that wasn’t medicine, because my system is so sensitive to everything.”

“I’ve had a sensitive system all my life,” she adds. “Doctors put me on so many antibiotics as a child with ear infections that by the time I started getting sinus infections as a young adult, I needed the strongest antibiotics available just to clear them up. That threw my body off balance.”

“And ever since my hysterectomy, I felt like I was so depleted — my hormones, everything. I needed to find something to get me back on track, to make me feel more like myself.”

BEGINS EATING MPR A YEAR AGO

“In addition to my cholesterol and blood pressure issues,” she says, “I was dealing with sinus infections, headaches, disk problems in my back, and low energy. So I thought I’d give MPR a try.”

Trish learned how this powerful food facilitates healing in the body, and that it takes 60 pounds of heirloom purple rice from Thailand to make just one pound of MPR.

“Within the first couple of weeks after I started eating MPR,” Trish says, “my blood pressure started to come down and my energy improved, so I was excited about that!”

“Other than that, one of the first things I noticed was the calmness that came over me, and to this day I still feel that. Before MPR, I could get kind of hyper.”

“I’m still having some disk problems with my neck and back,” she says, “so I go to a chiropractor for that.”

“My atlas gets off whack — that’s the top vertebra of the backbone, kind of what your skull pivots on. It must be from something I did as a child and don’t remember. I still get tension headaches from that, but they’re not as bad, and I don’t get them all the time now.”

“I feel my immune system has been strengthened by the MPR,” Trish says, “because I used to get sick a lot, from whatever was going around. Now I don’t.”

After six months of eating MPR, Trish says, her cholesterol had come down only a little bit. But today, after a year, it is in the normal range.

“Six months ago I had my cholesterol checked, and it was 286 — still pretty high,” she explains.

“But I just had bloodwork done again recently, and everything had come down,” she says, “including my total cholesterol, which was down to 225. Six months ago my good cholesterol (HDL) was 50, and it has gone up to 56. My triglycerides were 172, and they’ve come down to 146. And my bad cholesterol (LDL) has come down a lot, from 202 to 142. I was so excited with these results — I had to call Kare right away and let her know!”

“My calico cat Callie eats MPR, too,” Trish says. “I give it to her about four times a week with her wet food. She’ll be 14 soon but acts like she’s 5!”

“One thing I’ve noticed is that in winter, when the heat comes on, Callie would scratch her ears and all the fur would come off. That has stopped since she’s been eating MPR, and the fur has grown back in.”

With all the good results she’s having, Trish says, she’s committed to eating MPR for life!