“My cataract has reduced by 80% & I no longer have issues with my feet!” 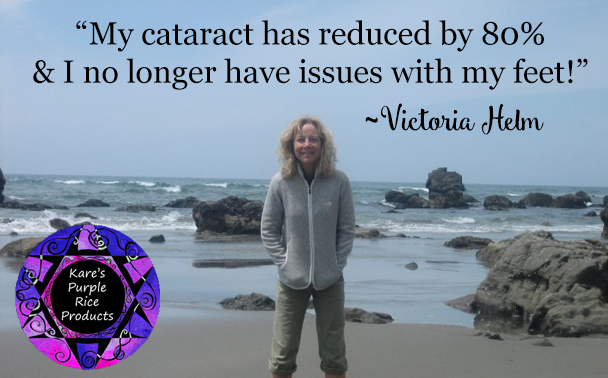 Life transformation coach Victoria Helm, 64, of California and Colorado has experienced an 80 percent reduction in the size of her cataract, thanks to Kare’s Micronized Purple Rice (MPR) powder!

Vicki relates that she’s also seen improvements in her plantar fasciitis, heel spur, and scoliosis, as well as feeling even better energy than before.

“I’ve eaten a very clean diet for at least 30 years,” she says, “with everything organic, nothing processed. I make everything myself, and I eat really well. I run and lift weights, too.”

“But despite all that,” she says, “I had a huge floater in my left eye, and I was very concerned because it was getting bigger. I was taking eye supplements and eating foods that support eye health, but nothing was working.”

“Then, back in October of last year,” she says, “I started on MPR powder. One of my clients had told me about it six months before that, but because I don’t do grains, I had thought it wasn’t for me, so I kinda blocked it out.”

“Then when this client and I did a phone session again in October (she lives in Florida), she was going on and on about it again, so I muscle tested it and got a yes. I thought I’d look at Kare’s site and get an idea of what MPR powder is and what it can do.”

Vicki learned how this powerful food can fuel the body, giving it more energy to repair and regenerate, and that it takes 60 pounds of rare, heirloom purple rice from Thailand to make just one pound of powerful MPR powder.

“Well,” Vicki says, “the very first thing I saw in Kare’s Facebook Group was a testimonial about cataracts going away! The woman had gone to a doctor who said her cataracts needed to be removed. But she was on MPR, and her cataracts were getting smaller. I took that as a sign.”

“After a couple months on MPR powder,” Vicki says, “I started noticing my cataract was getting smaller. There’s still a small floater, but now I’d say it’s reduced by about 80 percent. There’s nothing else I can attribute this improvement to. I was taking all kinds of eye supplements, but they hadn’t been doing the trick.”

“I also had plantar fasciitis and a heel spur,” Vicki says, “and I have pretty severe scoliosis, but I’ve always worked with it — I do yoga, and I run and hike, and so I keep it pretty well under control.”

“I’ve had the plantar fasciitis and heel spur on and off since 2008,” she adds, “but it had been really bad for the year before I started on MPR.”

“Now my feet are back to normal,” Vicki says, “and I’m running in the morning again, lifting weights, and doing cardio, and I don’t have any issues with my feet anymore.”

USING MPR PASTE FOR A SPOT ON HER FACE

“The last thing I’ve seen improve is a spot on my face,” Vicki says. “I’ve had it for a while, and it’s been slow to heal. It appears to be getting better, though. I haven’t been to dermatologists or other doctors, because I’m working on healing it myself.”

“Recently I looked in the Facebook group to see if people were using MPR as a paste on their skin, and I read about some who were. So I tried using it that way myself, and it’s helping.”

“Because I’ve eaten so healthfully and stayed active for so long,” Vicki adds, “I haven’t seen huge improvements like blood pressure or cholesterol coming down, like so many others do, but to me the eye thing is a huge success.”

“Our eyes are so important. I’d been doing everything I knew to do for my eyes, but the cataract just wasn’t getting any better — until I started on MPR powder.”

SHARING IT WITH OTHERS, TOO!

“I share it with almost every client I talk to,” she says. “Almost everyone talks about their health, even the ones in their twenties.”

“One gal is a successful acupuncturist,” Vicki relates. “She was going through a lot in her life emotionally — not sleeping, no energy, and I remember her texting me the next day after she started on MPR. She told me she had so much energy she’d cleaned her whole kitchen!”

“This woman was more skeptical than most in the beginning,” Vicki says, “because so many of her clients share products with her. But none of these products had felt right to her — until she tried MPR powder.”

“I also put my brother on it,” Vicki adds. “He’s one of those you’d think would never go on anything like this. He eats a very acidic diet and drinks very little water, so he has a lot of issues. I told him you need to drink a lot of water with the purple rice. I’ll be interested to hear what his doctor says about his bloodwork. He’s always going to the doctor, so I’m sure he’ll have some positive things to share with me.”

Vicki consults with people wanting to make big changes in their lives, she relates. She uses intuition, numerology, astrology, and Emotional Freedom Technique (EFT, also known as tapping) to help people figure out their highest path in life.

“My mission is to help people create the freedom to use their natural gifts and their passion as a way of life and a means to give back,” she says, “because I believe we should all be using our natural gifts and living our passions, rather than going through the motions just to make money.”

Vicki Helm is all about big passions and living life to the fullest, and Kare’s Micronized Purple Rice powder is helping her do that — and helping her clients do the same!