“My bone density has improved!” 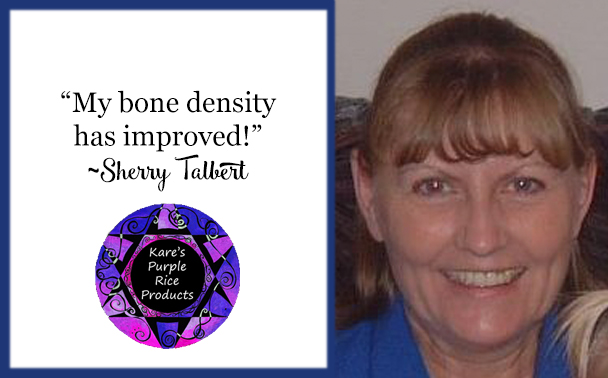 Sherry Talbert, 67, of Utah no longer has to endure the painful side effects of osteoporosis medication, thanks to Kare’s Micronized Purple Rice (MPR)!

The energetic grandmother is now able to keep up with her 26 grandkids without having to constantly worry about falling.

Sherry relates that before starting on her medication last year, her doctor had told her, “Whatever you do, don’t fall. Your bones are so brittle that you could be in serious trouble if you do.”

So she started taking a prescription osteoporosis drug, Sherry says, but the side effects were so bad that after just a couple months she couldn’t stand it anymore.

“I’d been taking the drug once a week,” she explains, “and I didn’t like what it was doing to my body. It was causing nausea, constipation, muscle pain, and headaches. The day after taking it, my muscles would hurt so bad I could hardly move.”

“The doctor had told me I’d need to be on it for three years,” she adds, “but I just couldn’t do it anymore. I also learned that it can cause serious long-term damage, and since I was born with just one kidney, I didn’t want to deal with that. So I thought, OK, well, I’ll just have to be super careful not to fall.”

LEARNS ABOUT MPR FROM HER SISTER

“I was so impressed with how it had helped her vision. She’d been having a hard time seeing the menu at fast food places, but after starting on MPR her eyesight began to improve — and now she can read the menu signs without her glasses!”

“Cindy had also injured her knee,” Sherry adds, “and MPR helped her recover. Now she can actually run up and down stairs again, and her knee doesn’t bother her anymore.”

“So I thought OK, I’m going to start eating MPR too and see if it helps my bones,” Sherry says. “At that point I’d been on the bone drug for a couple months, but I was looking for a more natural solution. That turned out to be Micronized Purple Rice.”

Sherry learned how this powerful food can fuel the body, giving it more energy to repair and regenerate, and that it takes 60 pounds of rare, heirloom purple rice from Thailand to make just one pound of powerful MPR powder.

“I ate my first teaspoonful of MPR powder on a Saturday morning,” Sherry relates, “and then I had it three more times that first day, for a total of four. I also took my weekly dose of the bone drug that day, and I anticipated having a lot of pain the next day from the side effects.”

“But I was very surprised when Sunday morning rolled around, because I had no side effects! Not only did my muscles not hurt, but I had no headache, and I wasn’t constipated. I thought, wow, I feel great today — this is unreal!”

“I continued eating my MPR three times a day, and the next week when I took my osteoporosis medicine, same thing — no side effects. But because of what I’d learned in my research, I felt that the long-term dangers of this pharmaceutical drug just weren’t worth it. So I stopped taking it, and I continued to eat MPR.”

“In March, nearly a year after I started on MPR, I had another bone density test,” Sherry says. “Well, my hip bones had stayed the same — they hadn’t deteriorated further — but the bone density of my vertebrae had improved!”

“I did change one thing in my diet,” Sherry says. “I’m not a milk drinker, but I started putting fortified almond milk in my coffee and on my cereal. The brand I buy has 50% more calcium than milk. The MPR may have helped the calcium to be better absorbed.”

“The X-ray tech who did my bone scan at the hospital was really impressed,” Sherry adds, “and I told her about MPR. Well, she ordered some and gave my name, so I got a free bottle!”

“I also have a melanoma on my face,” Sherry says, “but I didn’t want to get it burned off, so I’ve been keeping an eye on it. Well, several people have noticed that it’s not nearly as red as it was, and it’s getting smaller.”

Sherry has noticed other improvements as well.

“My gums don’t bleed anymore when I brush my teeth,” she says, “and my hair is healthier. I don’t have headaches anymore, either.”

“My skin has improved quite a bit, too,” she adds. “The wrinkles on my face aren’t as deep, and my husband noticed and said, ‘That’s not fair!’ because he’s getting the really deep ones. He actually touched my face and said, ‘Your skin feels so soft. Have you changed moisturizers?’ I told him I hadn’t.”

HELPING HER FAMILY AND FRIENDS, TOO!

“I’ve gotten some free bottles for referring people,” Sherry says, “and I gave them to my daughter, who suffers from severe migraines. They’re so bad that she’ll vomit for three days in a row. Since she’s been on MPR, though, she hasn’t had anymore migraines or nausea.”

Sherry is happy to have discovered MPR, she says, and looks forward to sharing it.

“People look at me when I’m out with my grandkids, and they’ll say, ‘Oh, out shopping with the kids?’ I explain that these are not my kids, they’re my grandkids!”

“I have four kids, and my husband has four, so that’s eight altogether, and between us we have 26 grandkids. They range in age from 7 to the mid-20s.”

With her stronger, healthier bones and positive outlook, Sherry no doubt will be playing with her grandkids and sharing MPR well into the future!