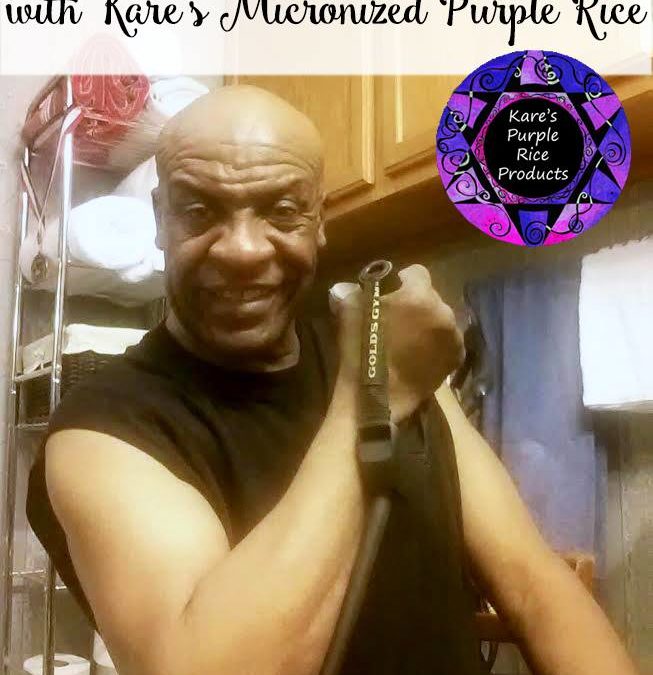 James Evans, 68, of Ohio has always been active, and when rheumatoid arthritis brought him to his knees, he found the answer in Kare’s Micronized Purple Rice (MPR).

“I’ve always faced challenges head on,” James says. “I grew up on the south side of Chicago, and I was inducted into my first gang when I was 5 years old. I learned discipline, and how to fight hard. Still, I was happy because I had a family and a safe place to sleep at night.”

“When I was older we moved to Michigan, and in high school I learned so much that influenced my belief system for the rest of my life. I was taught how life was meant to be in this country, and I bought in totally. I believed in liberty and justice for all people, not just some.”

“It’s this same belief system that drives me today to believe in our ability to heal ourselves. Given a superfood like MPR, we can help bring about a new felt joy and reason to want peace in the world. I believe in the ability of MPR to improve our physical health, which enhances our mental health, and that helps us come to a better understanding of how to love one another. Happiness leads to peace.”

A LIFETIME OF PLAYING SPORTS

“Well, as you can imagine,” he says, “as I got older, the chickens came home to roost, so to speak, and at age 47 I developed rheumatoid arthritis.”

Over the years he used various natural strategies to cope with his RA, he says, and remained active.

“Prior to November 2014, I was practicing to try to break the world record in the 400-meter dash for men over 65. I was coming along quite well.”

But in November 2014, says James, he ruptured his ankle, and that’s when everything fell apart.

“It happened while I was standing in line to see a jousting match in Orlando,” he explains. “I heard a pop, and it became uncomfortable to stand. When we got back to the hotel, I noticed my ankle was swollen.”

“After I hurt my ankle,” he says, “I couldn’t work out. All I could do was lie down, and my muscles began to atrophy.”

“And then, from all the inactivity, the rheumatoid arthritis hit me with a vengeance,” he says. “I had such terrible pain in my feet, ankles, knees, wrists, hands, knuckles… the only place I didn’t have pain was my back. I was taking painkillers like candy, and I didn’t like that at all.”

“I literally had to crawl to the bathroom,” he says. “My manhood was left somewhere back there — I couldn’t control my urination, and I became constipated. My muscles were cramping and locking. It was terrible! I couldn’t understand it — it felt like my body had turned on me.”

“Everything hit me so hard at once. I was used to being very vibrant and strong. But age and the results of not really watching what I ate, plus all my sports and physical activity, really caught up with me, and I knew I had to make a change.”

“I also started trying around that time to get my high blood pressure down and improve my diabetes. I began to eat a much cleaner diet and was trying all kinds of natural remedies.”

By the time James started on MPR in January, he says, “my legs had gotten thin — I must have lost 35 or 40 pounds of mostly muscle by then. I was walking gingerly, taking little steps so I wouldn’t fall, and people were reaching out to help me, asking, ‘Can I give you a hand?’ I refused to walk with a cane, because that would just be giving in.”

“I began to fight my RA with everything I had,” he says. “I just couldn’t go down like this.”

In December 2015, James says, he learned about MPR from a health-conscious friend.

“My degree was in biology and science,” he says, “and the information I got about MPR made a lot of sense to me, with my background in cell study.”

James learned how this powerful food facilitates healing in the body, and that it takes 60 pounds of heirloom purple rice from Thailand to make just one pound of MPR.

“Plus,” he adds, “I’ve been drinking alkaline water for about five years now, and I find it to be very helpful to my health. I began to feel better faster because of the synergy between MPR and the high-alkalinity water. It seemed to work better than mixing it with regular water or tap water.”

After starting MPR, James says, “Sleep was the first thing I noticed. My sleep started to improve, and I felt good about that, because I know that if I’m sleeping I’m healing.”

“The next thing that improved was my bowel movements. They started to become more frequent, and I wasn’t as constipated, so I knew it was working on my digestive system.”

“I was still urinating about every 30 to 45 minutes, though,” he says. “But then, about three to four weeks in, I noticed I was going longer periods without needing to urinate.”

“Soon I started doing light exercising again, using my stretch band. I started to build muscle, because that’s necessary to fight the RA.”

“Today,” he says, “after having been eating MPR for a couple months, I’ve quit taking my pain pills. I’m not totally pain free yet, but my pain level of 11 has come down to a 3 or 4. And I’ve already built back about 50 percent of my lost musculature, so I’m very happy about that.”

“My sight seems a bit better, too,” he adds, “and I don’t have as much blurriness.”

“I’m still on my diabetes and blood pressure meds,” he says, “but I no longer need my RA medication. The swelling is going down, and my joints are getting stronger.”

“Other folks are noticing the changes in me, too!” he adds.

“I’ve already gotten a couple people started on MPR, and I have several others ready to start soon as well. I immensely enjoy telling other people about it, because it’s something that truly works!”

“These days I’m working out again,” James concludes, “and trying to get my body back to where it was — and even in a better place. And if I can, I’d still love to break that world’s record!”