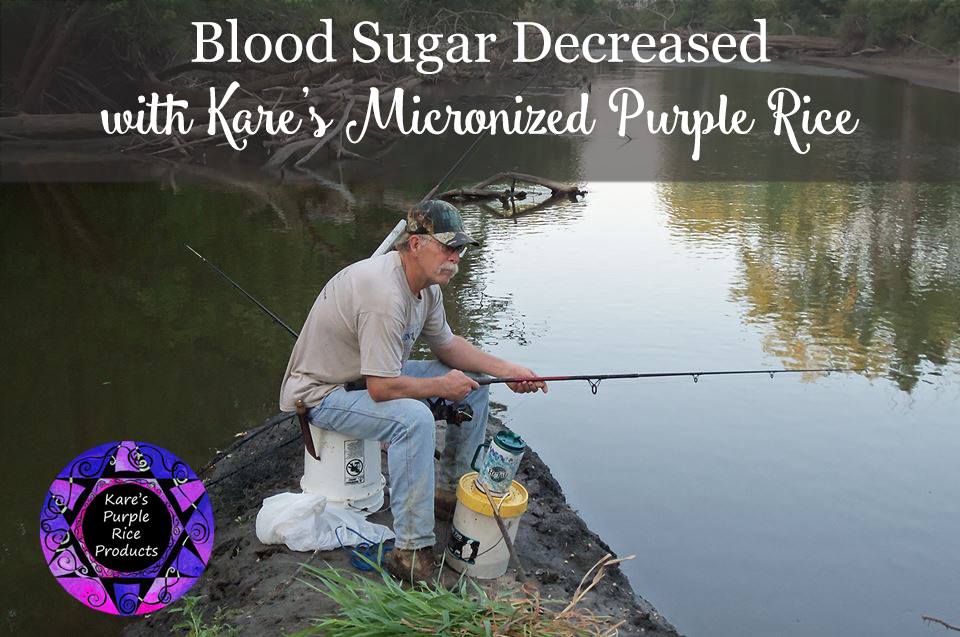 Iowa outdoorsman Bob Lappe, 61, loves feeling younger and having more energy, thanks to Kare’s Micronized Purple Rice (MPR). He’s been able to go off his diabetes meds, too, with his doctor’s approval!

“About a week after I started eating MPR,” Bob says, “I started having more energy, and not long after that I started noticing a difference in my recovery time after exerting myself.”

“I’m always looking for things to help me feel better,” he explains.

He works at a car dealership, Bob says, “but in the past, I welded for 18 years. Hanging on to stingers and picking up heavy pulleys for so many years was very hard on my hands.”

“I’ve had carpal tunnel surgery,” he adds, “and I always felt like I was wearing boxing gloves because my hands were so swollen. And I had to quit playing golf because I’d get so sore afterward.”

“What intrigued me was seeing one of Kare’s Facebook group members, DyAnn Aaron, who comes in to where I work fairly often,” Bob says.

“I’d seen DyAnn come in quite a few times, and she would always just kind of drag herself in, and she’d be like, ‘Oh my God, I hurt like hell, and my hands hurt so bad.’ ”

“She had eczema really bad on the palms of her hands,” Bob explains.

“Then one day she kind of be-bops in there and walks up to the counter. I looked at her and asked her what was up. She didn’t even look like the same person!”

“Well, she asked me if I’d heard of Micronized Purple Rice. I told her I had not. She put her hands out in front of her and said, ‘Just look at my hands, Bob.’ Her palms were clear, not cracked and red like before. She told me that was after only 11 days!”

“I said to her, ‘I don’t know what this crap is, but I want some.’ And honestly, it’s the best thing that’s ever happened to me. I can’t even begin to tell you how good I feel!”

Bob learned how this powerful food facilitates healing in the body, and that it takes 60 pounds of heirloom purple rice from Thailand to make just one pound of MPR powder.

An avid hunter and fisherman, Bob relates how he recovers much more quickly after exertion these days.

“I went coyote hunting not long ago with a buddy of mine,” he says.

“We got up early in the morning, and he had his coyote caller with him. That’s a device for attracting coyotes. Well, we walked through deep snow to the riverbank, where we set up the caller.”

“We were wading through knee-deep snow, or mid-thigh deep in some areas. You don’t just shuffle your feet in snow that deep — you’re picking them up over and over, and it’s a real workout. I was thinking, oh, Lord, this is going to kill me.”

“I said to my buddy, ‘Lyle, I gotta hang it up. I’m going to be so sore tomorrow that I’m not going to be able to even move for the next couple days.’ ”

“So we quit around 2:30, and I went home and took my wife to the casino for date night. But the next morning — I got up at 5 and went coyote hunting again!”

“Normally when I’d go fishing or hunting and walk up and down the riverbank like that for hours,” he explains, “I’d get charley horses afterward, unbelievably bad.”

“But that night,” he continues, “I got the ice bags out, because I thought the charley horses were going to be horrible. Well, they went away relatively quickly, and they never came back. That just blew my mind! I thought, ‘Is this a fluke, or what the heck?’ ”

“A couple weekends ago I helped my old friend Richard, whom I’d gotten started on this Micronized Purple Rice, and you ought to see how he’s doing — it’s pretty remarkable,” Bob says.

“Well, he needed some help tearing down walls and cleaning up some stuff, and I had Saturday off. We tore into it for a good four hours. Now, I’ve worked in car sales for the last seven years, taking people for test drives and filling out paperwork — I wasn’t used to all this physical labor!”

“So after helping Richard,” Bob says, “I went out to a pond to see if there was enough ice on it to go ice fishing.”

“There was a golf course not too far from there. So I moseyed over there and picked up three-quarters of a five-gallon bucket of golf balls.”

“Then I got back to town around 1, and took my wife to the casino again. It was just crazy how much energy I had!”

OFF HIS DIABETES MEDICATION

“I was able to quit taking my diabetes medication not long after starting on MPR,” Bob says, “with my doctor’s approval. My blood sugar is down from around 500 to only about 80 to 115!”

“I don’t take sleeping pills anymore, either,” he adds, “and I sleep like a baby.”

“Another thing I’ve noticed,” Bob says, “is that my hair is getting browner. It used to be pretty gray, but I’m starting to see a brownish-red tinge to it, and in my mustache as well. I don’t expect it to get dark like it was when I was in my 20s, but I think it’s remarkable that it’s not getting whiter anymore.”

He adds that he’s experienced some weight loss, as well.

“I’ve actually lost about eight pounds and dropped a pants size since I’ve been eating MPR,” he says, “after having worn that size for the last seven or eight years. I find myself eating less and exercising more, because I have more energy, I feel good — and I don’t hurt!”

Bob is also starting to tell other people about it, he says.

“My wife Connie is still kind of skeptical about MPR, but guess what?” he laughs. “She’s starting to tell people about it, too!”

Even pets can benefit from MPR!

“We have a black Lab named Lizzie,” Bob relates, “and I’m thinking about starting her on MPR soon. She’s 12 now — getting up there. She has fatty cysts, and I’ve heard MPR can help with those.”

“Lizzie loves to swim in gravel pits,” Bob says, “and everybody in town knows her. She rides in the passenger seat of my Blazer, with an orange hunting cap on her head, and when a car pulls up she’ll roll her head over and look at them. It’s hilarious!”

Thanks to feeling better with MPR, the future is looking bright indeed for Bob and his family!