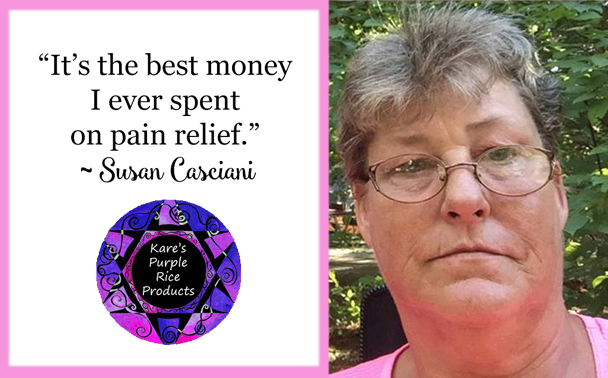 Susan Casciani, 57, of Michigan found relief from hand and knee pain, and is on the road to weight loss, too, thanks to Kare’s Micronized Purple Rice (MPR).

“I clean houses for a living,” Susan says, “and summertime is my busiest time of year. But I was in so much pain that I wasn’t sure how I was going to keep up with all the hard work.”

“My right knee has bothered me for quite a while,” she relates, “and the last couple of years my thumbs have been bothering me as well. It’s not carpal tunnel, but it’s in the thumb joint where it goes into the wrist. My right hand would ache all the way up my arm, from all the scrubbing.”

“I was looking for a natural pain reliever,” she says. “I’d tried peppermint oil, arnica, coconut oil, and a few other things, but I still had pain in my hands, all day, every day. I’d get home from work, sit down, and my legs wouldn’t want to work. I don’t have that anymore, though!”

STARTS ON MPR IN JUNE

“I started on MPR just a few weeks ago,” Susan says. “I watched the videos on Kare’s website and learned as much as I could. I joined her Facebook group, where I started reading all the testimonials and seeing what people were saying about their experiences with MPR. I researched it for several weeks before ordering.”

Susan learned how this powerful food can fuel the body, giving it more energy to repair and regenerate, and that it takes 60 pounds of rare, heirloom purple rice from Thailand to make just one pound of powerful MPR powder.

“When I finally called the health coach line,” she says, “Suzen Fields took my order. She was very helpful. I told her nothing had worked for me in the past. I’d tried lots of things and been ripped off. In the beginning I thought MPR must be another gimmick or a scam, but the pain in my hands made me want to try it. I figured if it worked, it would be worth the money. Well, it has turned out to be the best money I’ve ever spent on pain relief.”

“The pain relief I experienced made me want to keep going with MPR, to feel even better,” Susan relates, “but it has helped a lot with cravings, too. That has helped me eat more healthfully, and I’m making better food choices now.”

“Before, I was never satisfied with a salad, and I thought water was boring,” she says. “Now, all my cravings are pretty much gone — except for craving pure water… and purple rice!”

“I’m really looking forward to getting my weight down. I know it will happen because of all the improvements I’m making in my diet, thanks to the reduced cravings.”

“I’ve been drinking diet pop since I was a teenager,” she relates, “and I used to drink several a day. But now I’m down to just one a day or less, thanks to my reduced cravings. And now I drink a lot more water, which of course is so much better for you than pop.”

“It’s cheaper to eat junk food than it is to eat healthy food,” she says, “but I’m finding the healthier foods are worth the cost. Now it’s just a matter of getting my mind there, and making better choices than I have in the past.”

“Hopefully MPR will help me lose weight,” Susan says. “With all the eating plans I’ve tried in the past, I just didn’t feel good and they always took away my energy, so I’d give up. But with MPR, I feel so good that it’s much easier to eat right!”

ENERGY PICKS UP, TOO!

“I had my first serving of MPR on a Monday night,” Susan says, “and on Tuesday morning I felt great; I had more energy. I know that for most people it doesn’t work that fast, but it sure did for me. AND, by that weekend, my knee didn’t hurt!”

“My hands still hurt a little bit,” she says, “but my knee doesn’t hurt at all anymore. It’s awesome! I’d say I have 95 percent to close to 100 percent pain relief in my hands. I’m so happy, and so thankful that it worked so quickly for me.”

“Before starting on MPR,” Susan says, “I was having severe leg cramps, where I was waking up in the middle of the night. I upped my water and started taking potassium and calcium, and that helped a little bit. But, in just the few weeks I’ve been on MPR, I’ve had only one leg cramp, and it went away quickly when I stood up.”

Susan’s restless legs syndrome has calmed, too, she says. “I’ve only had it once since starting on MPR. Before, it was on and off, and nothing I did seemed to make it better or worse. The two weeks before I started this, it was really bad. I’m not sure what was going on. No matter what I did, I was still getting it. But not anymore!”

SHARING WITH OTHERS, TOO!

“I’d love to start a foundation that helps people who can’t afford MPR,” Susan relates. “It’s sad that there are so many people out there who need it but just don’t have the money to use it regularly. I know if I’d found out about it during my slow season — winter — I wouldn’t have been able to afford it, either.”

“I’ve been talking to everybody about it,” she says, “and I believe in it so much that I signed up as an Independent Business Operator, and I’m selling it now. I’m not going to push it, but for people who are ready to make a change in their life, I’m here to help them.”

“I tell people what’s happened for me so far,” she adds. “I tell them it might not happen that fast for them, since only about 10 percent of people start to feel better right away, whereas most people see results in the second or third month. Like Kare says, it’s not a quick fix, but it’s a REAL fix, and I tell them that.”

“I’ve invited about 30 people to Kare’s Facebook group so far. I talk to them about it first, to see if they’re interested, and if they are I add them to the group. It’s a good way for people to find out what Kare’s Micronized Purple Rice powder is all about, and what it can do for them. And it makes my job easier. I’m going to keep spreading the word!”

“I’m feeling so great that some people say it’s a miracle,” Susan concludes. “But I tell them no, it’s a process — it feeds your cells so that they can do what they’re supposed to do.”