“Arthritis and Back injury recovery” 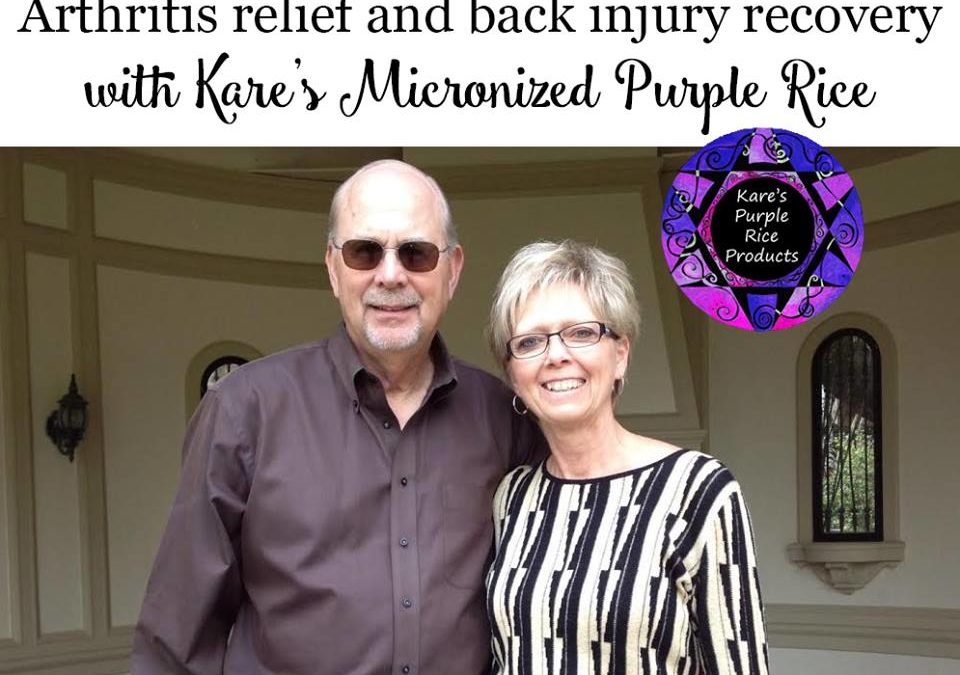 Lynn Wendt, 63, a bioenergetic practitioner in Michigan, loves how Kare’s Micronized Purple Rice (MPR) is creating vibrant health all around her!

Not long after starting on the MPR, she says, her husband Steve was injured in a bad fall. The MPR helped him recover and helped Lynn stay on an even keel emotionally during the ordeal.

“Steve fell about 15 feet and broke his back,” she says. “He hasn’t had much pain, though. He actually got up and walked half a mile — with a broken back! The medical staff were astonished and said, ‘You know, you don’t normally have this good of an outcome after a fall from 15 feet.’ ”

“He wasn’t paralyzed,” Lynn adds, “and didn’t need surgery, but he has a couple of vertebrae that need to heal, so he’s wearing a brace. But until we knew all that, it was very concerning. Thanks to the MPR, however, I got through all that on an even keel. I didn’t get anxious or stressed. I felt very strong emotionally — that whatever was coming, whatever we had to face, we could do it. I give the MPR credit for that.”

“I’ve got Steve on a bone matrix supplement that helps heal bone,” she adds, “and I know the MPR will usher that into his cells and it will be utilized much better than it would have been before. So we expect fast healing for him.”

Lynn found out about MPR on Facebook, she says.

“I’m always looking for high-quality products for my clients,” she explains, “and I was also seeking relief from arthritis pain for myself. I manage my arthritis fairly well with diet — I don’t eat grains or sugar, and that helps quite a bit — but recently the arthritis had surged, so I was trying different things.”

She says she became intrigued when she found the Kare’s Purple Rice Eaters Facebook group (www.facebook.com/groups/karespurplericeeaters).

“I kept an eye on the group for a few weeks to see what people were saying and what kind of results they were getting. I also researched the MPR and watched Kare’s videos on www.karespurplericeproducts.com.”

Lynn learned it takes 60 pounds of heirloom purple rice from Thailand to make just one pound of this powerful food.

“I’m so intrigued by how the MPR works,” she says. “I’m interested in the science, about how supplements perform better for us because the MPR helps them get into the cells.”

“I found Kare to be very informative and knowledgeable,” Lynn says, “and with her being in energy medicine for over 40 years, she has a good handle on how the body functions and what works well.”

As soon as her MPR arrived, Lynn says, she started taking it immediately.

“I’m very attuned to my body, and within two days I was already feeling relief, particularly in my hands, which is where most of my arthritis is.”

“My grandmother was crippled with arthritis,” she explains, “so I did not want to go down that pathway. I already have some malformed knuckles, which I’m hoping will change, but the inflammation, discomfort, and stiffness in my hands have already improved about 80 percent.”

“I actually got my wedding ring off the other day,” she adds. “I haven’t had it off in years! So I know the knuckle size is changing, getting smaller. There was a lot of inflammation in my hands. Now I sometimes forget I have arthritis — they feel so good!”

Soon she started sharing it with her clients, too, she says.

“My clients are truly health seekers. They want to know what works in the body, how the body functions, and what’s compatible. We’ve already got quite a few people using it. Results are trickling in, so we’re very excited about it here.”

Lynn says she counsels her clients on healthful eating, “and I practice that myself, which helps to a great degree. MPR is a functional food, so it fits my belief that food should be our medicine, like Hippocrates said. This is like Garden of Eden food, how God made food for it to be for us. This is how we feel when we’re eating good food.”

“One of the major things I’ve learned in my 20 years of practice,” she says, “is that no matter how many supplements we take, if we’re not eating well, the supplements cannot do the job by themselves.”

“In addition to no grain and no sugar, we recommend a good balance of fresh vegetables and high-quality protein, some fruit, and a few nuts. Most of the time we limit or exclude dairy, too. People notice a reduction in inflammation in their body with that kind of eating.”

Water is very important, too, she adds.

“You need to drink quite a bit of water for the MPR to do its job. Some of us need even more than the standard recommendation of half your body weight in ounces of water.”

“I see the MPR as kind of like a two-way street,” she explains. “You’ve got to move that metabolic waste out for the nutrients to get in, and the way to do that is by increasing your water intake.”

About a week into eating the MPR, she says, “I had some arthritis pain return in my right hand. That was a bit disconcerting, until I realized the inflammation was actually caused by the MPR working in those joints. So I increased my water intake. In fact, I drank three tall glasses of water in a row, to flush my system, and within an hour the pain was gone. My body just needed to have all that metabolic waste removed from the tissues.”

Lynn went through some emotional cleansing, too, she says.

“I had an emotional cleanse that I am convinced was facilitated by the MPR. It happened a few days before Steve fell. While it was very unpleasant for me to go through and for those affected by it, the results have been amazing.”

“I was on the phone with Kare and started crying, at times so hard I could hardly speak. I was unreasonable, could not focus, and said things that were very uncharacteristic of me. It lasted for a couple of hours, and I was wrung out by the end. Kare was so super, talking me through it. When she explained how MPR crosses the blood/brain barrier and can help with brain imbalances, I knew she thought I was certifiable! The aftermath has been peace, calmness, happiness, terrific focus and energy. Also, my arthritic hands feel much better.”

Along with her emotional cleanse came a physical cleansing, Lynn adds. “I’ve noticed my bowel movements are more regular. After I have a nice cleansing bowel movement, I’ll notice that my knuckles are improved even more.”

One other interesting thing Lynn noticed is that her handwriting is improving.

“I’m left handed, and I write backhand,” she says. “My writing is very sloppy, but it has improved since I started on MPR. My letters are larger, not so cramped, and much more legible than they had been. I don’t think it’s due to the arthritis getting better, because my handwriting has never been good. I think it’s more of a central nervous system issue.”

“I also have my 86-year-old mother on the MPR,” she adds, “and her handwriting has improved as well. You know how elderly people’s handwriting can get shaky? Well, hers has gotten nice and smooth. She lives with me and Steve, and she tells us, ‘My whole body just feels different.’ She’s sleeping better, and her mood is much improved!”

Lynn says a number of her clients are eating the MPR now, and, “although they haven’t been on it long, they are already seeing improvements. Two people with Crohn’s disease are eating it, and both started feeling the benefits right away — less gurgling in the gut, and better bowel control.”

“Also, a gal with rheumatoid arthritis started eating the MPR,” Lynn says. “She is also giving it to her husband, who is a cancer survivor. His cancer treatments caused diabetes, and he’s on insulin shots. Well, he’s already had to reduce his insulin, after only three weeks of eating MPR. You have to be very careful with insulin-dependent diabetes, because it can drive your blood sugar too low, but he is managing it very well and has already, with his doctor’s approval, gone from four shots a day down to two and is seeing his blood sugar readings in the normal range, or very close.”

Lynn has also seen a number of smaller improvements, she says.

“I made a list when I first started of all the symptoms I would like to see improve. The major one of course was my arthritis, but I have some other issues as well, such as floaters in my eyes, spider veins, a plantar wart, adult acne, sleep problems, hot flashes, and just things that indicate an imbalance somewhere in my system. These things have all greatly improved.”

“My senses have even gotten sharper,” Lynn says, “especially my sense of smell. My eye floaters are gone, and my fingernails are much harder and growing faster.”

Thanks to better health through MPR, Lynn and her clients have much to be grateful for!To learn more about the MPR, go to: www.karespurplericeproducts.com/purple-rice