8 Unusual Foods That Are Great For Your Health 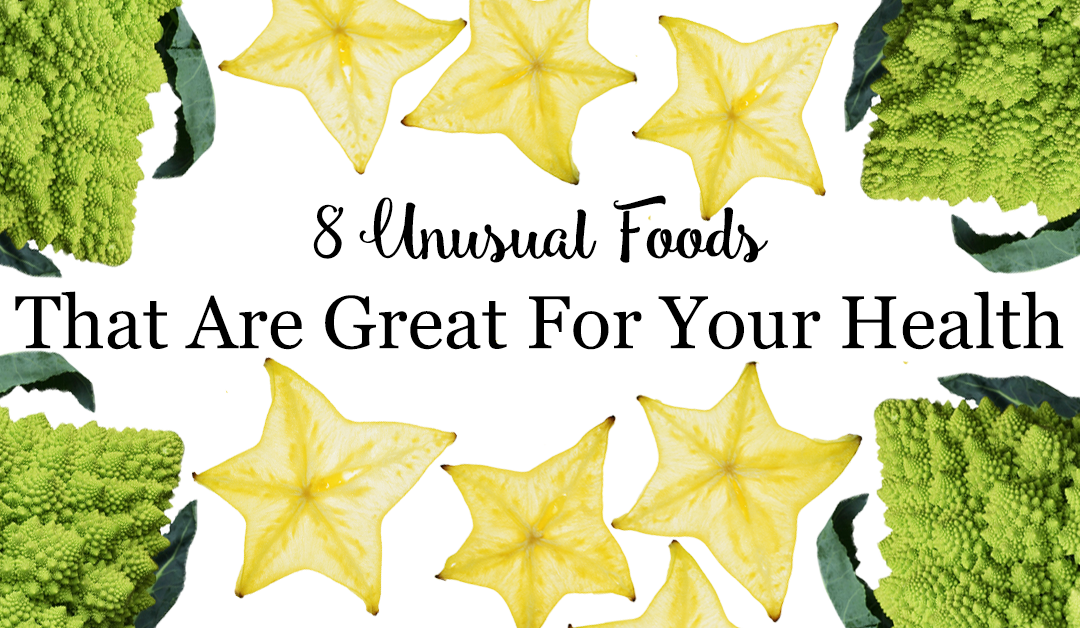 If you follow my High Frequency Wellness page on Facebook, you may have seen my posts about jackfruit. It grows right in my back yard here in St. Petersburg, Florida. Jackfruit is a strange one, for sure. These nubbly green giants, originally hailing from India, can weigh as much as 66 pounds! I haven’t seen one that big, but we do have some big ones here.

They have golden-yellow bulbs inside that are as tasty as they are nutritious. Loaded with fiber, they taste a bit like banana.

Inside each bulb is a seed, and these are also nutritious. For eating as a snack, the seeds can be roasted in a 400-degree oven for 20 minutes. The shells will crack open, and the flesh inside is creamy and delicious!

Jackfruits are rare among fruits in that they have a good amount of B-complex vitamins, including B-6 (pyridoxine), niacin, riboflavin, and folic acid.

They also contain ample amounts of vitamins A and C as well as plenty of minerals. And because they have so much fiber, they’re great for diabetics because their sugar is absorbed slowly.

But jackfruits are not the only unusual foods out there. If you’re trying to eat healthy, it pays to get as much variety as you can in your diet.

Lots of stores are carrying unusual foods these days, foods that are way outside the Standard American Diet (SAD). Purple rice is a pretty unusual food, too! You can find it in health food stores and many supermarkets as well. Just check to make sure it’s not from China, because the purple rice from China may contain pesticides made with arsenic.

That is not a problem with my Micronized Purple Rice powder, though, because every batch is meticulously tested at four stages along the way. It’s one of the cleanest foods you can eat!

Expand your horizons by adding some or all of these eight unusual treats (including the jackfruit and purple rice) to your diet. Your taste buds, as well as your healthier cells, will thank you! We’ve all seen drinks, candy, or whatever that are passionfruit flavored. But have you ever had an actual passionfruit?

They don’t look like much from the outside — kind of like big dry prunes — but passionfruit is one of the most delicious fruits I’ve ever eaten.

Once you cut into that wrinkly dark brown shell, inside is juicy yellowish stuff with edible seeds. They’re a bit sweet, and a bit tart, but not too much of either.

Like most fruits, they’re loaded with antioxidants, fiber, vitamins, and minerals.

If you’re having a party where there’s a punch bowl, these are great for making little stars to float on top! All you do is slice them, and they make perfect five-point stars.

They’re also great in smoothies, fruit trays, salsas, and salads. And they’re a natural as a garnish for just about anything.

There are two kinds, one sweet and one sour. The sweet ones are yellow; the sour ones are green. The yellow ones are good raw, while the sour ones work well cooked — they’re even great for making pie!

Their biggest health benefit is that they’re loaded with vitamin C. If you’re a fan of sacred geometry, fractals, Fibonacci numbers, and the golden mean (or golden ratio), then Romanesco is for you!

A type of cauliflower originating in Italy, Romanesco is chartreuse colored and has a crunchier texture and a milder flavor than regular white cauliflower.

Besides being interesting to math nerds and New Age types, Romanesco is also very nutritious. This spiky green gem is loaded with vitamins C and K, as well as fiber and carotenoids. Also originating in Italy is the red and white salad veggie known as radicchio, which is actually a type of chicory.

Radicchio leaves add a spicy dash to your salads, as well as an extra helping of nutrition.

These colorful leaves contain the powerful anti-cancer mineral selenium, as well as other minerals, plus vitamins B, A, C, K, E, and folate.

Radicchio makes a wonderful addition to salad, and it’s also delicious roasted with whole garlic cloves. Coat in olive oil with thyme, salt, and pepper, and roast for about 20 minutes. After it’s done, drizzle with balsamic vinegar. I love to add this juicy, semi-sweet white veggie to my salads. Its texture is similar to that of a pear, but it’s not as sweet. You peel it and chop into sticks or cubes. You can even cut it into thin slices, coat with olive oil, and bake for some healthy snack chips!

Popular in Mexican cuisine, jicama is also known as the yambean or Mexican yam. It’s not much to look at from the outside — almost like a light brown turnip — but jicama is quite tasty. It adds such a delicious crunch to salads, and it can also be eaten cooked.

Besides being loaded with minerals (especially iron and potassium), jicama is great as a prebiotic. Our gut microbes love it! It also contains lots of health-boosting vitamins. Also very popular in Mexican cuisine is the tomatillo. These green tomato-type fruits are often used in green salsa. They taste more sour than a regular tomato, and they have an outer husk.

Tomatillos are great in Cuban food, too. They go well with fried plantains, rice, and black beans. Yum!

Tomatillos have similar nutritional benefits to tomatoes, but have even more fiber, minerals, antioxidants, and vitamins.

What unusual foods have you tried lately? Or what are some that you’d like to try?