8 Powerful Grains that Make the Grade 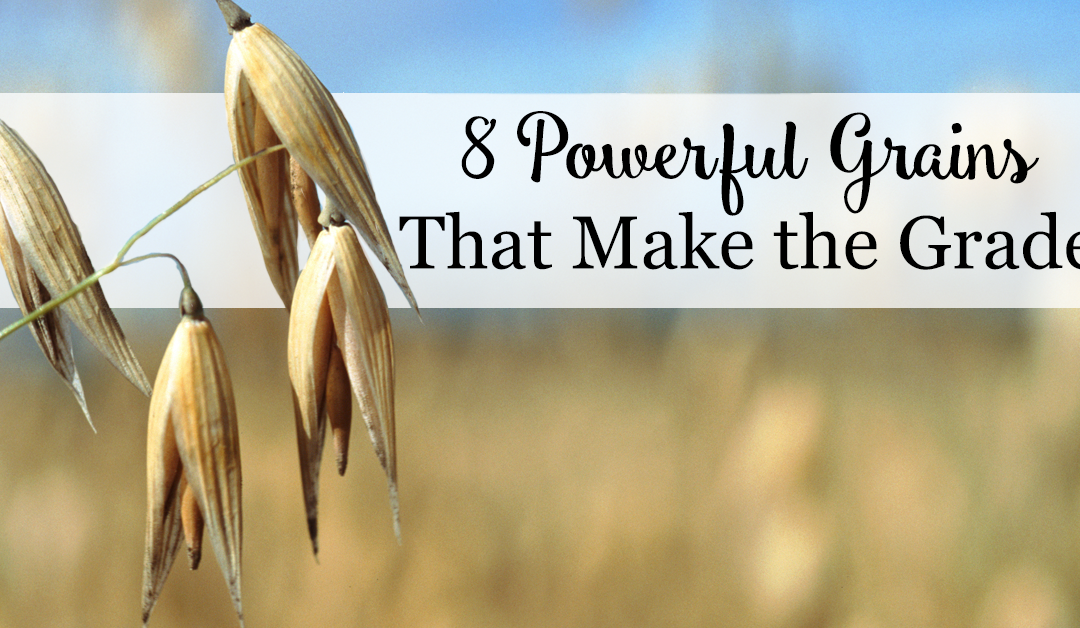 Are you wondering if you should be eating grains? There’s a lot of confusion over this issue.

The USDA, of course, recommends we eat grains. Lots of them. How many depends on your age, gender, and level of physical activity. The government agency does at least get it somewhat right in recommending that at least half of the grains you eat should be whole grains. I would go a few steps beyond that and say that almost ALL the grains you eat should be whole grains. When I say whole grains, I mean grains that have not been milled into flour, and are not processed in any way.

Furthermore, I would recommend avoiding wheat, corn, and soy as much as possible. The reasons for that all start with G: gluten, glyphosate, and GMOs.

Let’s start with gluten. Wheat is the primary culprit there, but rye and barley also contain this glue-like protein.

Even if you don’t have celiac disease or gluten intolerance, it’s best to stay away from gluten. This protein, made up of glutenin and gliaden molecules, has become associated with a host of health problems, from autoimmune disorders to depression — and more.

Wheat has changed dramatically in the last few decades. As such, it is no longer a healthful food, even if you choose the so-called healthiest kinds, like organic, stone-ground, or whole wheat.

That’s because of cross-pollination, GMOs, factory farming, glyphosate, and on and on. It’s just bad news. Period.

I know it seems hard to give up bread, pasta, cake, pie, and all the other floury processed foods we are so used to. But believe me, if you try going without them for a while, you might just be surprised at how much better you feel!

There are, of course, gluten-free versions of these familiar foods, and some of those might be OK, but check the ingredients carefully. Often the manufacturers sneak in sugar, fillers, preservatives, and other things you don’t want in your body.

And yes, I know, who has time for preparing homemade food from scratch, right? At least that’s what I used to tell myself. But then I realized it just wasn’t true. I could do it.

The tradeoffs in better physical and emotional health, more energy, and greater vitality are so worth it!

The next of the three G’s to avoid is glyphosate, also known by its brand name of Roundup. This herbicide, or weed killer, has become ubiquitous in modern agriculture.

Then the crops are heavily sprayed. The weeds die, but not the grains. The grains are simultaneously dried out by the glyphosate, making them easier to harvest. Everybody wins, right?

The people making money from factory farming win, but everybody else loses, big time!

The World Health Organization even said, in 2015, that glyphosate is “probably carcinogenic in humans”!

So, I try to stay away from those three grains: wheat, corn, and soy. They are just too contaminated in our modern world.

But does that mean you shouldn’t eat any grains at all?

There are actually quite a few grains you can eat that are still good for you. However, since even these grains are energetically “heavy,” I’d recommend limiting quantities to no more than one serving a day.

And, it’s best to eat them whole rather than ground. Grinding them before storage takes away some of their vitality. It increases the chance of rancidity, mold, and insect infestations. The best way to grind grains is with your teeth!

Note that I’m not including barley and rye because they contain gluten.

Millet is also not included here, because it’s a goitrogen. Enough of us have thyroid problems as it is, without adding to our troubles! Also, it is not a complete protein like the similar-looking grains, quinoa and amaranth, are.

Buckwheat also didn’t make the list, because it contains a chemical that for some people can cause light sensitivity.

The remaining grains are those that made the grade! Here’s a list of some very healthful grains to add to your diet:

Pronounced keen-wah, this tiny yet powerful grain (actually a seed, but cooked like a grain) from the Andes Mountains of South America is highly nutritious. The Incas revered it, considering it sacred.

Today it is still grown in various regions of South America, and a lot is also grown in the mountains of Colorado.

There are over 120 varieties, the most common being red, black, and white. I like to switch off between them, or get “tri-color” quinoa — a mix of all three.

When cooking quinoa, it’s important to thoroughly rinse it first. That’s because of the bitter compound on it that naturally repels insects. Once cooked, you can make all kinds of tasty dishes from quinoa.

If quinoa was a favorite of the Incas, amaranth was the power-grain choice of the Aztecs! These grains look similar and have a similar nutrient profile. Amaranth grains are a little smaller.

As well as being gluten free (like all the grains in this list), both quinoa and amaranth are full of high-quality complete protein. Their carbs are healthy complex carbs, and their fats are healthy, too. Both have a lot of vitamins, minerals, and other nutrients.

Like quinoa, amaranth is very versatile. The Internet is loaded with delicious recipes for both!

Another tiny round grain, teff looks a bit similar to amaranth, only it is even smaller. In fact, it is so small that it can’t even be hulled! So the only way to eat it is as a whole grain.

Teff is a staple of Ethiopia and is often used to make the deliciously spongy flatbread served in Ethiopian restaurants. Yum!

This high-energy grain is a type of wheat that originated in ancient Egypt. (Kamut is a brand name for khorasan wheat.)

Kamut, like beans, needs to be soaked overnight before cooking. Known for their soluble fiber and other health benefits, oats are a great choice if you’re going to eat grain. It’s best to buy whole oats that come from Ireland, where they are less likely to be contaminated with GMOs from neighboring wheat farms.

The standard rolled oats are certainly quicker to cook, but they also are higher on the glycemic index. A healthier choice is steel-cut oats or whole oats.

Long a staple food for us “health nuts,” up until a few years ago you couldn’t go wrong with brown rice. Today, though, you have to be careful to avoid brown rice with too much arsenic. Brown rice from Texas is the worst, according to Consumer Reports.

If you get a good clean brown rice with low arsenic, it can still be good for you. It’s got lots of fiber and is good for diabetics due to its low glycemic rating.

Brown rice also is rich in selenium and manganese, as well as antioxidants. It’s certainly better for you than white rice, which has been stripped of all its nutritional value.

Technically wild rice is a grass, not a grain, but let’s just call it a grain for our purposes here. I much prefer it over brown rice. It’s got a nuttier flavor and cleaner energy and is the easiest kind to digest. And, it’s got NO arsenic!

Wild rice, like brown rice, contains lots of fiber and helps with energy and digestion. It even helps lower cholesterol! Well, hello! Of course, this is my favorite!

Not only is purple my favorite color and the highest frequency, but whole purple rice is delicious and nutritious.

Just be sure you buy purple rice that comes from Thailand, not China or the U.S., due to concerns about arsenic from pesticides.

Purple rice used to be known as “forbidden rice,” because the Thai (formerly Siam) emperors were the only ones allowed to eat it because it was so rare and valuable. The peasants were forbidden from eating it.

(Note that black rice and purple rice are similar, but not quite the same. Both are very nutritious. There are more than 3,000 different strains of rice!) But of course, my rare heirloom Micronized Purple Rice (MPR) powder is the most nutritious “grain” of all. And even people who are allergic to rice can tolerate it just fine. I have yet to hear of anyone having an allergic reaction to it.

Arsenic is not a concern with MPR, either. Our purple rice for making the MPR powder is grown in northern Thailand, from an heirloom strain grown with no GMO’s.

Thailand is one of the few countries that has outlawed GMOs.  Every batch is tested and retested four times.

MPR is a powder that comes from only the heart of the grain.  (The purple rice in stores often comes from China, and much of it contains contaminants such as arsenic from pesticides.)   I believe Micronized Purple Rice is the cleanest and most powerful food I could ever put in my body!

It actually takes 60 pounds of purple rice to get 1 pound of these nutrients!

The husk and starch are removed, so only the precious nutrients go into this product.

Then, and this is really the big secret to why it works so well — it is milled down to the size of a micron using a special milling machine.

So it is so small that when you mix it in water and drink it — much of it can enter through the cell membranes and fuel the cells immediately with nutrients that can recharge, repair and regenerate the cells.

And as new cells are generated, they are healthier, which helps our bodies to become healthier and improves many health conditions.

There you have it –  My 8 favorite grains.

What is your favorite grain dish? How is it made, and with what kind of grain?