7 Heirloom Veggies to Treasure for Your Health 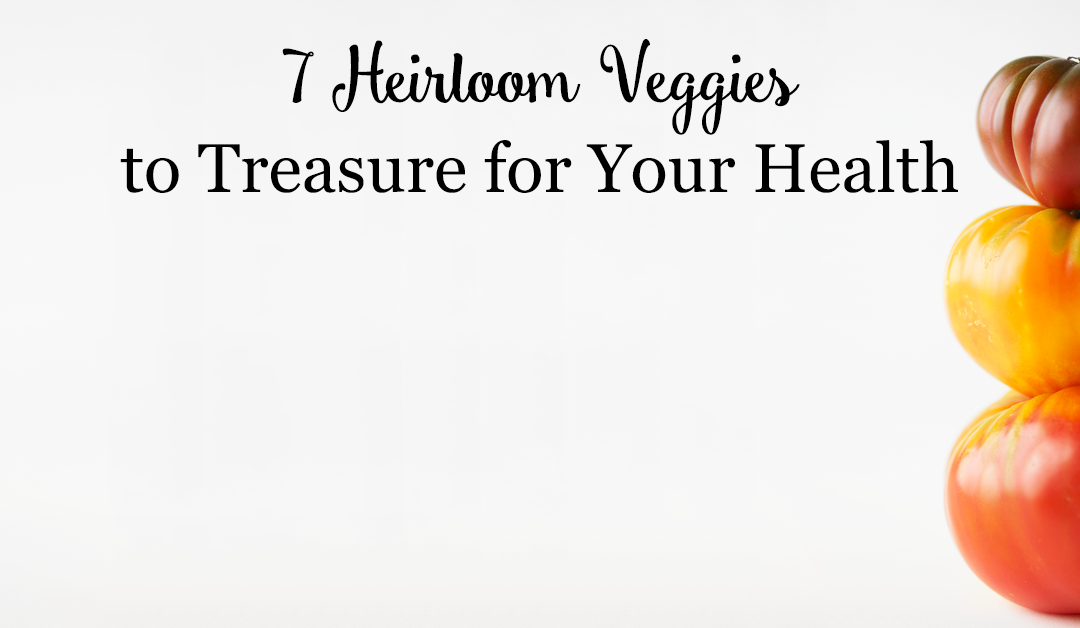 Does your family have any heirlooms? Some families own priceless heirlooms such as a Ming vase or an antique diamond pendant, whereas other families, like mine, own heirlooms with sentimental value.

Our family heirlooms include photos and memorabilia from all our family cruises together, amazing stone carvings that Charles has collected over his lifetime, and pottery that Joshua and I created in our home studio.

But whether your heirlooms have actual value or sentimental value, they still perform the treasured role of carrying on a legacy.

We had an heirloom grapefruit tree in our yard that gave us grapefruit for nearly 30 years and was 100 feet tall and probably already 30 years old when we bought our home.

We gave the seeds from this precious grandmother grapefruit tree to everyone we knew to help preserve them and her babies are growing in her place in our yard today. The same is true of heirloom vegetables. Like family heirlooms, they are lovingly passed down from generation to generation. And they carry on a legacy of times past, before humankind started messing with our food.

Heirloom vegetables are those that have not been selectively bred, hybridized, or genetically modified. They are similar to veggies grown hundreds or even thousands of years ago.

Heirloom tomatoes are the best-known example. Sadly, we now have to pay dearly for these delicious, highly nutritious gems. I have seen them in the supermarket lately, priced as high as $5.99 a pound!

They may look ugly to you, as compared to the uniformly round, red tomatoes you’re used to (that taste like cardboard). Heirloom tomatoes are irregularly shaped and sized and have splotchy colors. Some are even green, as if they weren’t ripe, although they in fact are (the green zebra variety, for example).

Most of today’s vegetables are not grown for nutritional value, or even for taste. They are bred to have large yields, to repel pests, to be uniformly colored and sized for stacking, to have a longer shelf life, and to withstand the rough and tumble of being shipped halfway around the world.

And compared to fruits and vegetables in their wild state, the way they were before the dawn of agriculture thousands of years ago, today’s fruits and veggies are as different from their wild forebears as day and night.

But if you know where to look and are willing to pay more (and you’ll have more money in your food budget once you cut out all the processed junk), heirloom vegetables can add a lot of healthy nutrients — not to mention delicious flavor and variety — to your table.

Farmers markets are the best places to find the best, freshest heirloom produce. If you don’t know of one in your area, look for local listings on the Internet.

Be sure not to confuse heirloom with organic. Organic produce, by law, cannot be genetically modified, but unfortunately most of it IS hybridized. Heirloom can be either organic or conventional, depending mainly on whether or not pesticides were used.

Of course if you’re a home gardener, you can grow your own heirloom veggies. And believe me, I do!

As you probably know if you’ve been following my videos on my High Frequency Wellness Facebook Page, my yard here in Florida is a virtual paradise.

I grow all kinds of things here, from jackfruit to avocados and turmeric root, and hundreds of orchids (even vanilla bean orchids—did you know that vanilla beans come from orchids?). I just love being able to walk outside and pick fresh, ripe fruits and veggies anytime I want to!

One of the biggest benefits of home gardening is that you can save your heirloom seeds from year to year. So, not only does your food taste much better, but you don’t have to pay for seeds!  I compost and used to see all the seeds and clippings that I threw in the compost regrowing—but unless I buy heirloom—nothing regrows in the compost anymore!

Most people know about heirloom tomatoes, but there are lots of other heirloom veggies as well.

And of course, let’s not forget heirloom purple rice from Thailand! That’s what my Micronized Purple Rice (MPR) powder  is made from, a rare heirloom variety of purple rice that has not changed since it was grown for Thai emperors hundreds of years ago. Back then it was known as “forbidden rice,” because only royalty were allowed to eat it.

But today, anyone can get whole grain purple rice at their local health food store. Just make sure it’s not from China, because they use pesticides that contain arsenic.

On the other hand, our MPR, made from heirloom purple rice from Thailand, is tested four times and is one of the purest foods you can eat. It is a true heirloom food, in every sense of the word.

Of course—the purple rice you buy to eat is nothing like the heirloom purple rice in our Micronized Purple Rice Powder.

And we use only the *heart* of a rare heirloom purple rice grain, which contain polysaccharides for energy, polypeptides (containing every amino acid) for creating protein and healthy new cells, and lots of anthocyanin antioxidants, which repair damage).

Now, here are seven heirloom veggies to brighten up your table and add extra nutrition to your diet for better health: If you’re tired of carrots being orange, you need to try rainbow carrots. They come in a variety of different colors: deep purple, dark red, bright yellow, and even white. I love these!   (Note, however, that not all colored carrots are heirloom. Some have been recently developed to meet demand.) Also known as candy cane beets because of their deep pink and white stripes, Chioggia beets add vibrant color to anything they’re put in, although they tend to lose color if you cook them. (This loss of color can be lessened by adding lemon juice or white vinegar to the water while cooking.) Yes, a radish that is colored like a watermelon! I’ve been seeing these in the supermarket lately, but have yet to try one. An heirloom variety of Chinese daikon radishes, they are members of the brassica family, along with turnips, broccoli, and arugula. Watermelon radishes have a succulent, crisp texture and are best eaten raw. Undoubtedly named for its rich chocolate color on the outside, the sweet chocolate pepper is a beautiful deep, rich red on the inside. These are great raw in salads and salsas, as well as in cooked dishes. This is a type of eggplant that actually looks like an egg! I’m not sure why the standard purple ones (aubergines) are also called eggplant, but whatever. The white ones taste about the same, although they’re a bit milder tasting. Well, you know I love anything purple, and this is no exception! An old Italian favorite, the Violetta Italia cauliflower is a rich, deep raspberry purple color when raw, although it loses much of that color when cooked. It has a mild, broccoli-like flavor. And speaking of purple… did you know that purple potatoes are much more nutritious than russets and other types of tubers? The purple majesty potato is a deep, rich violet hue, clear through the potato. And just like my Micronized Purple Rice powder, they are loaded with anthocyanin antioxidants.  Remember that the color purple emits highest frequency also!

Do you grow any heirloom vegetables in your garden? Or, do you buy them at the store? If so, what are some of your favorites?