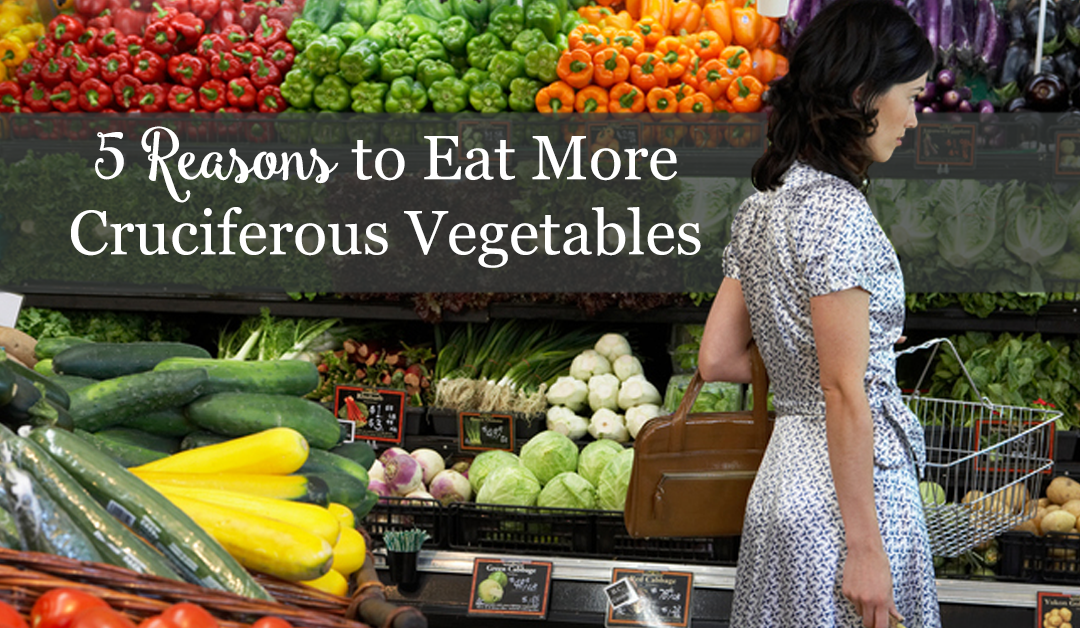 Do you eat enough cruciferous vegetables?

The latest research shows that these nutritional powerhouses can help the body improve or heal itself from many ailments, including cognitive impairment such as memory loss, vision problems such as macular degeneration, and neurological issues such as stroke.

They are one of the best tools in our arsenal for reducing inflammation, which is implicated in many chronic diseases, and they have lots of other benefits as well.

Of course it goes without saying that you should always buy organic in order to avoid pesticides. The list of cruciferous veggies, or crucifers, goes well beyond just the familiar broccoli, cauliflower, and cabbage.

It also includes more exotic choices such as daikon radishes, wild arugula, and mizuna — even broccoflower, which is a hybrid of broccoli and cauliflower. You can even find cauliflower in colors such as golden or purple!

The easiest way to know a cruciferous veggie is by its slightly bitter taste. Sulphur compounds give them that taste, and are also part of what makes them so healthful.

And although it’s not a vegetable, Kare’s Micronized Purple Rice powder helps with the absorption of nutrients from these nutritional powerhouses. It also helps to decrease inflammation in the body.

You might be wondering whether it’s best to eat cruciferous veggies cooked or raw. The short answer is that it depends on which cruciferous vegetable, and on your own body.

For some, too many raw cruciferous vegetables can lead to or exacerbate hypothyroidism or goiters. Having a big glass of raw kale juice every day might be a bad idea for that reason. This is mainly true for people with low iodine.

I like to include a bit of raw kale or spinach with my celery/cucumber juice, or in smoothies, but I mostly eat my crucifers lightly cooked.

One thing about eating crucifers raw is that they’re at their best when freshly picked, i.e., within 48 hours. That’s when their enzyme activity is strongest. So if you garden, you’re way ahead of everybody else. If not, local farmer’s markets often have veggies that were picked that morning.

If you’re going to cook crucifers, it’s best to let them set for a while after chopping before you throw them in the pot. That helps with the enzyme activity.

And, if you’re cooking them, it’s best to steam rather than microwave. Steam them until they’re bright green, never olive drab, which means they’re overcooked.

In addition to steaming crucifers, roasting is another option. It can be very healthful because the nutrients don’t leach into water. They’re mouthwateringly delicious that way, too!

One way to make crucifers even more healthful (and tasty) is to add allium vegetables or herbs such as garlic, leeks, onions, or shallots. Throw those in at the last minute so they don’t cook very long. You want allium veggies to be as close to raw as possible, for maximum health benefits.

Another healthful complement to cooked crucifers is mushrooms. Look beyond just the standard white button mushrooms. Shiitakes are among the most delicious, but there’s also portobello, crimini, and others. Fresh is generally better than dried, depending on availability.

You can also add herbs and spices such as thyme, oregano, or cayenne. These also have powerful health benefits as well.

Be sure to use high quality salt, too. I love to use Himalayan pink salt, which is loaded with healthful minerals.

Don’t be afraid to add healthy fats to your veggies. The best two are ghee and olive oil. Ghee, or clarified butter, from grass-fed cows tastes delicious and is very good for you. So is high-quality extra virgin olive oil, but it must not be heated very high, so it’s best to drizzle it on after cooking.

Fermented crucifers are very healthful as well. We’re all familiar with sauerkraut, but other cruciferous veggies can be fermented too. Look online for information about how to make your own.

Fermenting crucifers is particularly helpful if you have IBS (irritable bowel syndrome). People with IBS otherwise have a hard time eating many crucifers because of their high fiber content.

Here are five other reasons to eat more cruciferous veggies:

Crucifers are loaded with vitamin C and soluble fiber, as well as many other nutrients such as vitamin K, thiamin, riboflavin, niacin, magnesium, phosphorus, vitamin B6, folate, pantothenic acid, potassium, and manganese. Some crucifers, such as kale and turnip greens, also have a lot of readily absorbable calcium, which is especially important if you avoid dairy. Calcium, of course, is important for preventing osteoporosis.

A powerful health benefit comes from glucosinolates, which are the sulfur-containing compounds found in cruciferous vegetables. They impart that bitter flavor and pungent aroma that crucifers are known for. Glucosinolates are broken down into active compounds called indoles, nitriles, thiocyanates, and isothiocyanates. These substances have many health benefits.

Three potent phytochemicals found in crucifers are sulforaphane, indole 3-carbinol, and crambene. These substances are thought to activate detoxification enzymes that get rid of harmful substances before they can damage cells.

Crucifers can add quite a bit of protein to your diet — more than 25 percent of the daily value in three cups — and at a very low calorie cost. Just 200 calories of steamed broccoli provides about 20 grams of protein — a lot! That’s not as much protein as the 30 grams in 200 calories of roasted chicken breast, but it’s still a substantial amount. And it is more easily digested than chicken protein.

Surprisingly, cruciferous veggies contain a fair amount of omega-3 fatty acids. This may be part of why they are so helpful with lowering inflammation.

Mom was right when she said to eat more veggies, especially cruciferous veggies — and modern science is confirming this.

What are some of your favorite ways of preparing them? Let me know in the comments below.